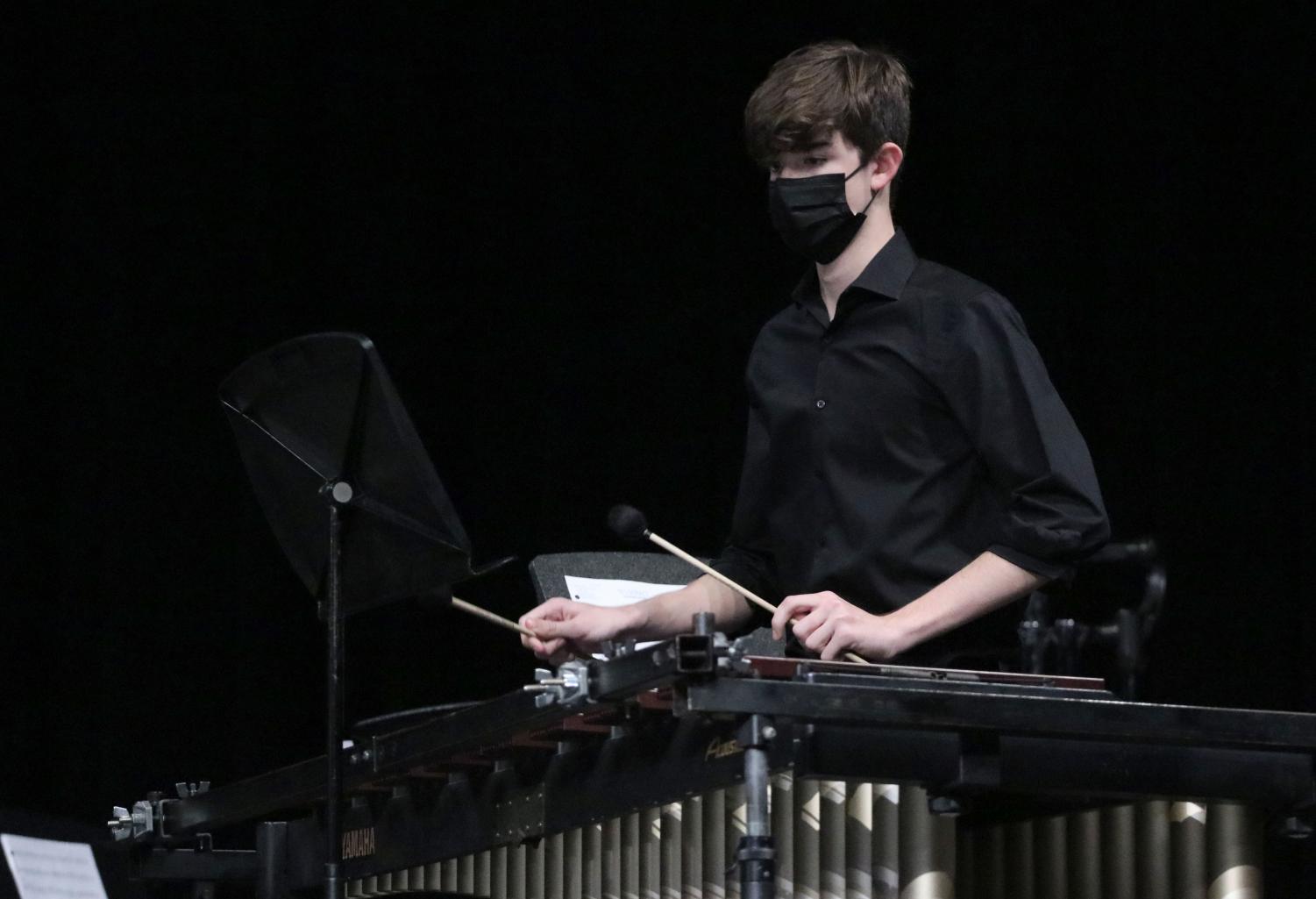 Senior Tyler Kerch performs with an ensemble at the percussion concert on March 9. Percussionists are required to play a variety of instruments, including marimbas, snares, chimes, timpanis and more. (Photo by Andie San Luis)

Senior Tyler Kerch performs with an ensemble at the percussion concert on March 9. Percussionists are required to play a variety of instruments, including marimbas, snares, chimes, timpanis and more.

In addition to baseline involvement within each activity, Kerch has taken on extra responsibilities through leadership positions; he is co-president of NHS, president of BPA and historian of the computer science club.

“All [of my extracurriculars have] added a different component to my high school experience,” Kerch said. “With clubs like BPA, TSA, computer science club and NHS, I get to [learn about] things that I’m interested in and prepare myself for a major that I may be pursuing [in college.]”

Kerch has also been in band all four years of high school as a part of the battery — percussion instruments that march on the field. For the 2020 season, Kerch acted as the center snare, one of the most prominent percussion roles available.

“My first year here, Tyler was still pretty immature,” head percussion director Zach Houston said. “As he got older and had more leadership [roles], he grew and started being a better leader. He [doesn’t] come across as intimidating to other students and leads by example.”

Alongside band, Kerch spends most of his time in the computer science club. Kerch began taking computer science classes his sophomore year, and has continued developing his skills through the club and coding contests. As the historian, he helps organize weekly meetings and provide content for members.

“Tyler has a very high standard for himself,” AP computer science teacher Jared Stites said. “He works very hard to meet that standard and he’s very confident in what he does and how he carries himself. It makes him a role model for other people. His actions speak much louder than his words, and people see that. He’s [able to influence] others through his actions and his achievements.”

“The biggest thing needed is an interest and passion for the field and what we do in it,” Stites said. “You couple that with [Kerch’s] ability to come up with solutions to complex problems, his drive and his skill level [makes me] feel that he would be extremely successful in [the computer science field.]

Currently, Kerch is looking to pursue a career in computer science — possibly double majoring in business — at Texas A&M or the University of Texas.

“The [high school] experience I had was absolutely wonderful,” Kerch said. “Freshman year, I went in thinking I would have [a] straight forward high school experience. I was trying to minimize mistakes, [but] over time, I learned those mistakes were important [in] being able to learn how to grow. It will always work out as long as you’re putting your best foot forward. [I’m excited to] be able to use that to develop myself going into the next years of my life.”