Football team to kick off season against Denton Guyer 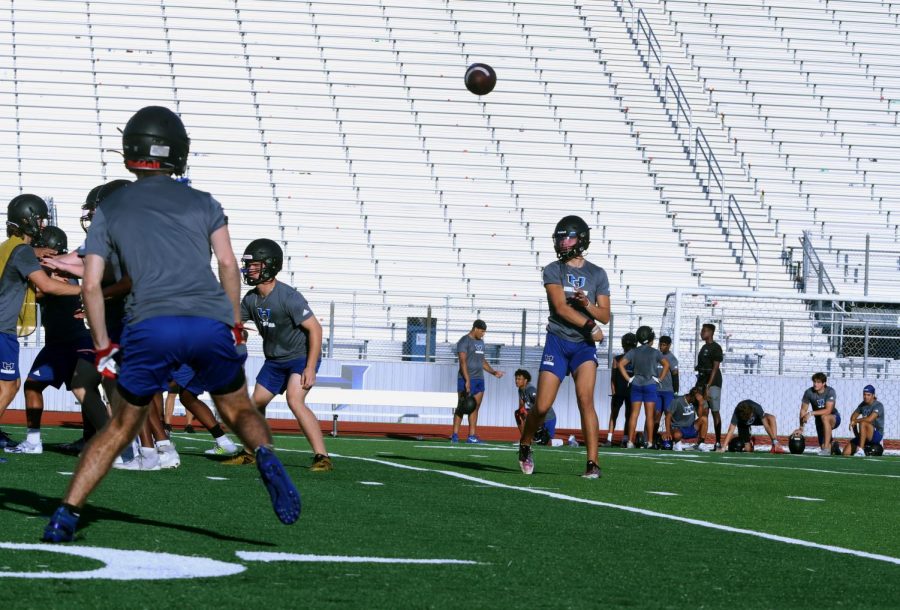 Quarterback Braxton Baker passes the ball to his teammate during practice before school on Aug. 25. The team practiced a variety of new plays in preparation for the upcoming game against Guyer in hopes to defeat them, unlike last year.

The football team will play its first game of the season on Aug. 26 against Denton Guyer at the CH Collins Athletic Complex at 7 p.m.

The team opened last season playing Guyer at home and lost 56-33. Head coach Brian Brazil said they know Guyer is a good team, but every year brings a fresh start.

“Our expectation is to go out, compete hard and do something we’re proud of,” Brazil said. “Obviously the goal is always to win, that’s what we’re working for, but we do play a tough non-district schedule. We thought those schools were really going to help prepare us for when our real season begins, which is our district season. That’s when the games start counting toward an opportunity to go to the playoffs.”

The Collins Complex, where the game will take place, is located in Denton. Brazil said beginning the season with an away game can help with team bonding by putting them in a new environment.

“I think anytime you play on the road it has a different feel,” Brazil said. “Sometimes, if you go on the road you can get away from some of the distractions. I know it’s going to be a great place to go out there and play in Collins Stadium, but we hope a lot of our fans show up, even though it’s a Thursday night. We sure like having them out to be there to support us.”

The football team ended last season 4-3, and ranked 4th in the district.

“Last year was last year and I think that’s always a good thing,” Brazil said. “When the season ends, you get to close out that year. This is the 2021 version of the Hebron Hawks, so we’re anxious to go out and get this season started.”

Although the start of a new season meant the loss of productive seniors, Brazil said underclassmen are prepared to take on the role of varsity players.

“Last year we did lose some good players, but boy we had a lot of injuries,” Brazil said. “A lot of those guys didn’t play, [so] a lot of these [new players] stepped up and played earlier than we were expecting them to. I think we really had more experience going back this year than we had going into the season last year, so we’re excited about this group.”

Brazil said he is eager to start the season fresh, and for the team to play to the best of its ability.

“I think that’s just the mentality of this team: it’s not so much about any one individual,” Brazil said. “I think it’s about the group and just how they work together and nobody really cares [what position] he comes from. They really pull well for each other and I think that’s the thing I’m really excited about for this bunch.”