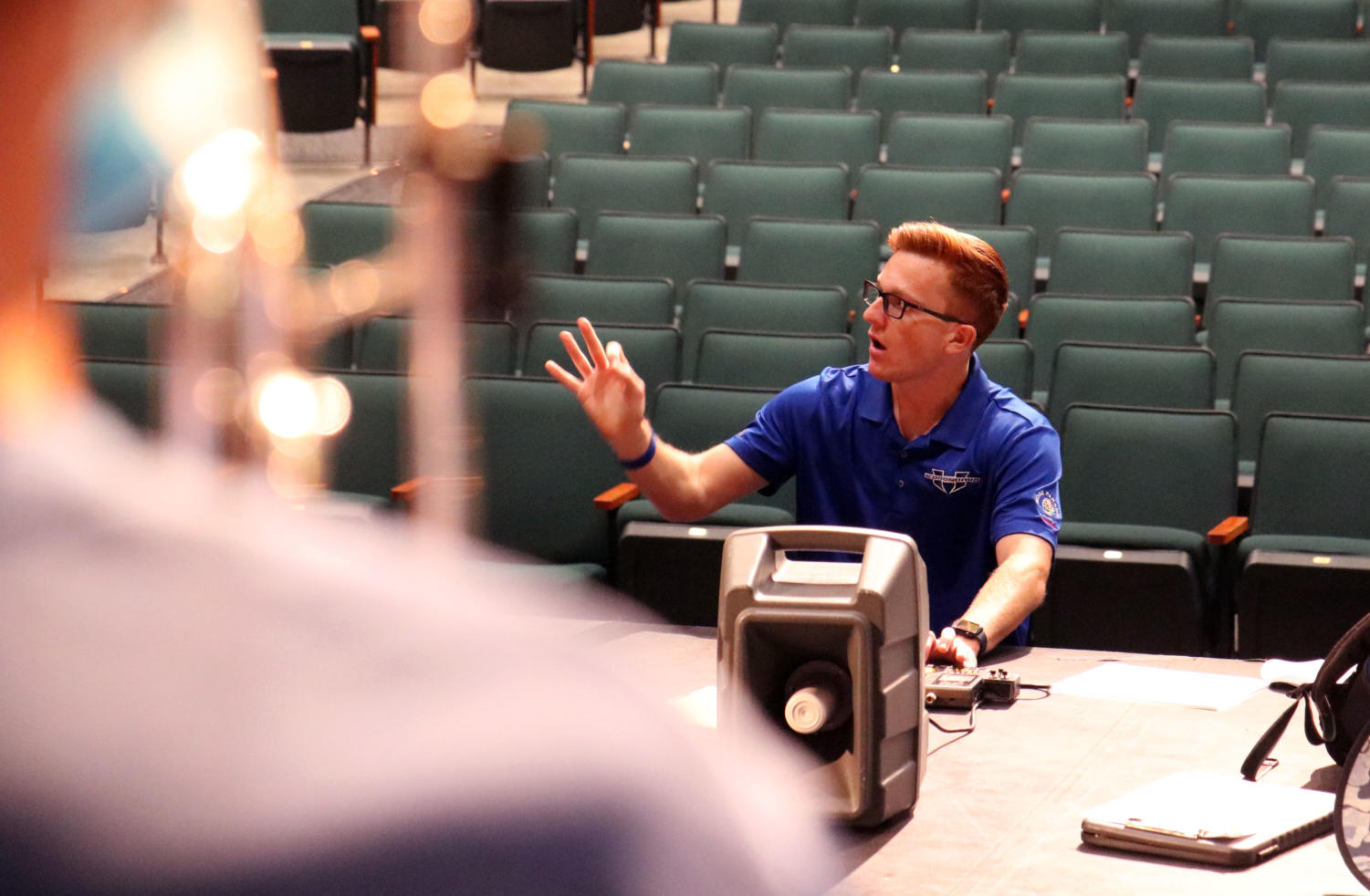 Assistant band director Brock Alsaffar instructs the trumpets and mellophones during class on Aug. 31. Alsaffar works with all high brass players across the program, regardless of which class period they’re placed in. (Photo by Andie San Luis)

Assistant band director Brock Alsaffar instructs the trumpets and mellophones during class on Aug. 31. Alsaffar works with all high brass players across the program, regardless of which class period they’re placed in.

Not so [Alsaf]far from home

Earlier in the day, he received a call from the head band director, Andy Sealy, notifying him he was in the final running for the job. After his WebEx interview with principal Amy Boughton and Sealy, he closed his computer. He’d hear back from them tomorrow. After a day of anxiously waiting, he received a call from Sealy. He had gotten the job. Immediately, the thoughts flooded, “Oh my gosh, this is insane, this is crazy.” He didn’t think twice about his answer. “Yes, yes, I’ll take the job.”

“I knew of the band program before I came here,” Alsaffar said. “When I was [in high school], I went to Marcus and competed directly against [Hebron] from 2012-2016. Seeing what [Hebron] was able to put on the field at that time really inspired me, and I’m really glad I get to be a part of this team now.”

Going into college, Alsaffar already knew he wanted to pursue a career in music education. He graduated from Texas Tech in 2020 and was a student teacher at Lewisville High School during the spring semester of the 2020-2021 school year.

“[I’ve known Alsaffar] for four years,” current Hebron student teacher Philip Killgo said. “He’s become much more confident in his teaching abilities. After getting the chance to see him in action, it looks like he’s really coming into the role of assistant director nicely.”

In addition to Alsaffar’s student teaching experience, he marched with the 2019 Blue Devils, a nationally ranking corps in Drum Corps International. Drum Corps International, commonly referred to as DCI, is a professional marching band competition, where groups train over the summer and tour the country. In 2019, the Blue Devils won the World Class Championships, making Alsaffar a world champion.

“[DCI] has definitely [aided my skills] as an educator,” Alsaffar said. “It helped me learn [how] to approach different aspects of visual learning that I had never thought of before. I hope to implement some of that here—not just the visual aspect of things, but also from a playing aspect.”

As a trumpet player, Alsaffar spends most of his time working with high brass students during class periods, and he is the director of the concert band. The band will focus primarily on the marching show music during the fall but will transition to concert music in the spring semester.

“He’s a great teacher, and part of what makes him a great teacher is his [ability] to relate to people,” Killgo said. “That is a really valuable thing to have: a sense of acceptance and [encouragement].”

The band was invited to the 2021 Tournament of Roses Parade in Pasadena, CA; however, due to COVID-19, it was pushed back to 2022. Alsaffar will be joining the band on their trip.

“As an educator, I want to be the best role model I can be and [convey] that to [my students],” Alsaffar said. “I want to show the hard work and dedication that it means to be in the program, and what it means to be a good person as well. I want [students] to take what they learn here and apply it to whatever they’re doing in the real world. That’s my goal as an educator.”