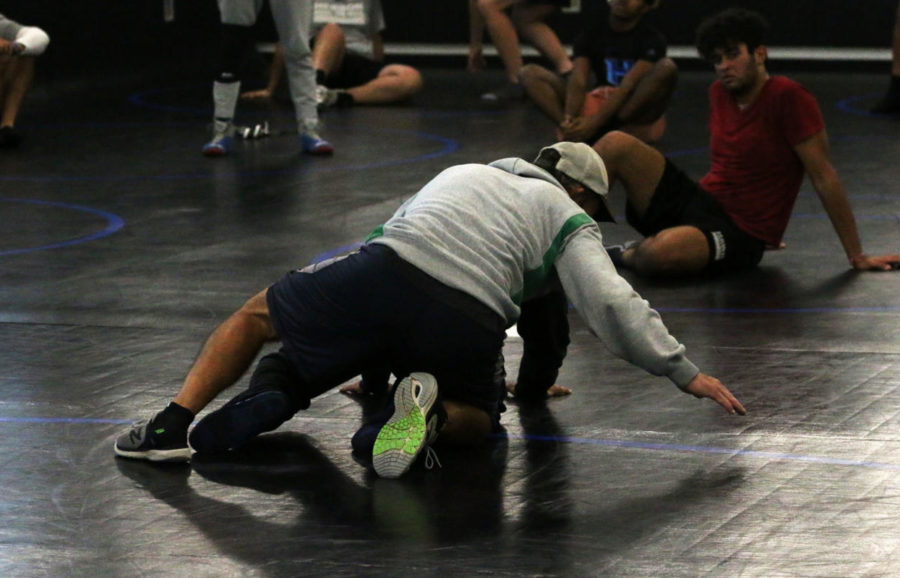 Wrestling coach David Rozanski demonstrates a move for some of the new members. The wrestling team holds practice every morning in their new mat room in the Hawk Activity Center.

The wrestling team began its winter season with a match against Lake Highlands, Eaton and Whitehouse on Nov. 12.

“Our varsity players did better than they did two years ago, from what I remember,” junior Stephanie Negrete said. “[Our competitors] were pretty tough schools, and it was good that [our team was] able to win at least a couple of matches. We win some and lose some.”

The team also went to a two-day tournament at Arlington Martin on Nov. 19, with two wrestlers advancing to the second day.

“We need to get better on getting up on bottom and not giving up as many ins,” head coach David Rozanski said. “Positively, we have been wrestling good on our feet.”

The team is scheduled to have matches on Dec. 2 and 4. Junior AJ Lovett said the team has seen an influx of members compared to last year.

“Since I have been on the team, I have seen more people come into wrestling,” Lovett said. “Last year, we had no one, but this year we have more people joining.”

Rozanski said ineligible wrestlers and injuries have taken a toll on the team so far.

“We are probably in the middle of the pack as far as our district,” Rozanski said. “There are a lot of injuries and ineligibles — stuff like that can happen. Injuries can happen; it’s a physical sport.”