“Fa-La-La” into the holiday 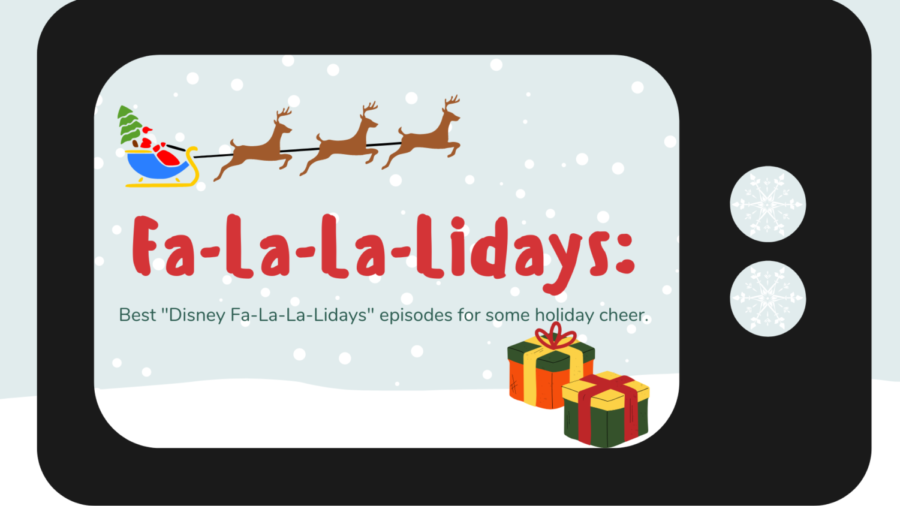 Since I enjoy wallowing in my past, I revisit my childhood by watching the Disney Channel holiday special episodes every year. Near Halloween, I watch the “Monstober” episodes, and during Christmastime, I watch the “Fa-La-La-Lidays” episodes. I have curated a list of my favorites down below, so you too can experience the Disney Christmas joy.

One of the many things I love about holiday episodes is the highly-anticipated crossovers. One of these is the crossover between “Jessie” and “Liv and Maddie” in “Jessie’s Aloha Holidays with Parker and Joey.” While the crossover only includes Parker (Tenzing Norgay Trainor) and Joey (Joey Bragg) from “Liv and Maddie,” it is still jam-packed with adventure. In the 50 minute episode, Jessie and the kids go to Hawaii for Jessie’s acting job, but end up running into Parker, Joey and Jessie’s childhood friend, Shaylee Michaels (Maia Mitchell). With multiple plot lines in the episode, this special held my attention the whole time.

Growing up, I didn’t see anything special about “Girl Meets World,” but after watching “Boy Meets World,” I have absolutely fallen in love with the show, especially this episode. In it, Cory (Ben Savage) and his family host the holidays for Cory’s parents (William Russ and Betsy Randle) and Cory’s best friend, Shawn (Rider Strong). While the actual plot of the episode isn’t the best, it still warms my heart, because it feels like I got to see all of the characters grow up. While I did enjoy the episode for sentimental reasons, the actual plot was slow and the acting felt forced at some points.

While I must admit that part of the reason I chose to rewatch this episode was to revisit my crush on Austin (Ross Lynch), I do not regret it. This episode had the quick-witted humor and charm that most Disney Channel shows possess. In the episode, a shipment of Austin Moon dolls are mixed up with a different doll, so Austin, Trish (Raini Rodriguez), Ally (Laura Marano) and Dez (Calum Worthy) try to fix the problem. The simple conflict and light humor made this episode the perfect thing to watch for a little Christmas joy.

“Good Luck JESSIE: NYC Christmas:” (10/10)
At this point, you may be able to sense a pattern from my rankings: I love “Jessie.” But even more than that, I love the “Jessie” and ”Good Luck Charlie” crossover. I can still remember waiting for this episode to be released after watching ads about this special. In the episode, Teddy (Bridgit Mendler) and her brother, P.J. (Jason Dolley), go to New York for a New York University college tour. While in New York, they run into Jessie and the kids, where the conflict unfolds. Watching this episode now, while experiencing the stress and excitement of college applications and acceptances, I feel a little bit more connected to the characters. This episode also has one of the best storylines in any of the “Fa-La-La-Lidays” specials.

No matter what traditions you are accustomed to, adding any of the “Disney Fa-La-La-Lidays” episodes to your holiday season will be worthwhile.