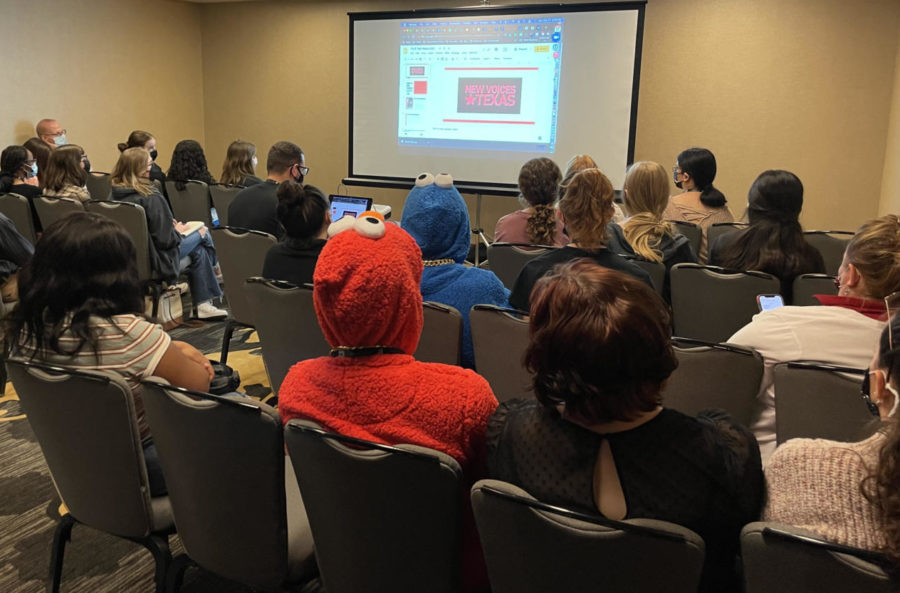 Student journalists from across Texas watch a presentation about New Voices at the Texas Association of Journalism Educators’ Fall Fiesta Convention in October. After the presentation, a few students shared their censorship experiences.

Last year during the 87th Texas Legislature, a bill meant to protect student journalists’ First Amendment rights attempted to make its way through the session. Despite gaining bi-partisan support, the bill died in the Calendar’s Committee. To gain traction in the next legislative session, scheduled for January 2023, a student-led, grassroots movement, New Voices, is asking school board members and school administration to sign a pledge in support of the bill. In order to ensure democracy in the community and allow students to practice ethical journalism freely, board members and administrators across Texas should sign the pledge.

Despite the fact that freedom of the press is a right guaranteed by the First Amendment, the 1988 court ruling Hazelwood v. Kuhlmeier allows administration to prior review and even censor stories as long as they have a “legitimate pedagogical concern.” The issue with this, however, is that the term “pedagogical concern” was not clearly defined. This ruling, while it may seem to protect schools and communities, actually puts more responsibility on administration and harms schools and communities.

Administrators are not hired to filter what school publications post: they are there to help manage students and teachers and generally look over the school. Part of those responsibilities may be monitoring what is published about the school, but the real responsibility should fall on the advisers of said publications. The advisers, who have to pass a journalism certification test, confirming their knowledge in the area, are responsible for ensuring that reporters follow ethical journalism standards. Hazelwood v. Kuhlmeier, though, requires that administration be able to decipher between what is ethical and not. Because of this, many times the administration will abuse its power and censor anything that may be even a little controversial or be perceived as harmful to the school’s image.

Not only does this court ruling add responsibility to administrators, but it can affect the information seen by the public. With prior review and restraint in place, administration has the right to review content before it is published. They may become nervous about certain information being shared, which could lead to restricting what is published and what information the public sees. Therefore, this ruling not only infringes on the rights of student journalists, but the rights of the information-seeking public as well. Freedom of the press is not only a right that protects journalists, it is also in place to keep the government accountable. Part of having a working democracy is having the freedom to consume all news, not just ‘safe’ news.

New Voices may seem like a frightening piece of legislation to someone trying to run a school or district, but it doesn’t mean students can publish whatever they want, including obscenities and falsities. New Voices seeks to allow students to publish important information while also following ethical journalism practices, minimizing harm and sharing news. School publications will not be allowed to libel or slander anyone, meaning everything that is released must be completely true and relevant.

Signing the pledge and supporting New Voices will allow student journalists to learn and practice as reporters do in the real world. By signing the pledge, administrators and school board members can display their confidence in the publication advisers, lessen administration responsibility and ensure the freedoms of the school and community.