New black box theater to be constructed by 2023 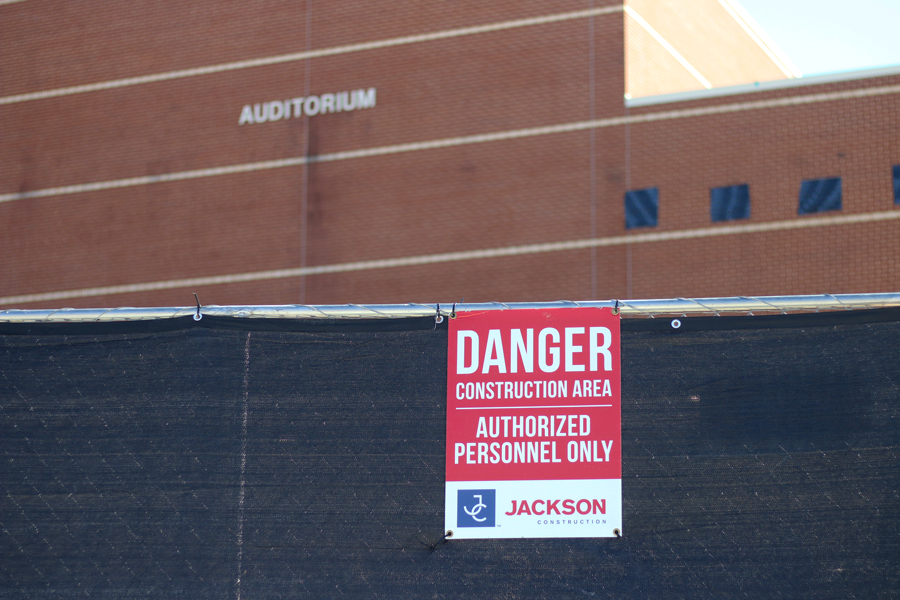 Construction of a new black box theater is currently underway in front of the auditorium, and is expected to be ready for use by 2023.

“It’s going to dictate a lot,” head theater director James Crew said. “It’s going to open opportunities to do a lot more stuff that is a lot more intimate. It will be a world better for us, and everybody wants [a black box].”

A black box theater is typically a small square performance space that is painted black, with seats around the walls and a stage in the center. It is a relatively new concept in the theater and performing industries that allows for more audience interaction during shows.

“The beauty of a black box is that we can use it in any way we want, and the space is much more functional,” Crew said. “You have risers you can configure for seating. We never have to mic anything in the black box [with] the way it’s designed. The acoustics are great. You don’t have dead spaces.”

A plan for the black box construction began when LISD approved a bond package in 2017, funding a number of renovation projects, one of which being the construction of a black box theater. Other LISD high schools, including Flower Mound and The Colony, have black box theaters. LISD Director of Fine Arts Amanda Drinkwater said the plan for the new performance space was largely developed over the course of the 2020-21 school year.

“Other LISD black box spaces are utilized as instructional classrooms during the school day, and for performances and productions outside of school hours,” Drinkwater said. “The black box is primarily [intended] to serve the theater program, but as is the case with all campus spaces, they could be utilized by other programs or to support the campus.”

Assistant principal Rachel Flanders has been overseeing all construction projects since she came to Hebron in 2021. Her role is to mediate the conversations happening between administration, construction companies and those like Drinkwater at the district level. Flanders said while the 20-year refresh will continue throughout the summer, the black box is a completely separate project.

“As our fine arts programs grow and see more students, we need more spaces for each group,” Flanders said. “All of those groups are seeing an increase in students and we want to make sure that we are accommodating for what they need. We do have a 20-year refresh of our fine arts, [but] that is completely separate from [the] additional black box project, which was funded from different money.”

The construction of the black box will include a lobby with bathrooms, a new woodshop, a classroom attached to the shop and the physical black box theater with a backstage area. Crew said one of the reasons he started at the school he worked at previously, W. T. White HS, was the black box theater.

“It was the whole reason I had wanted to go to that school,” Crew said. “Our plays usually pull at most 100-200 audience members [and] a black box is supposed to hold 200, from what I understand. It would make it seem like [the theater] was more full. There’s nothing worse than going into a play and seeing only the middle front section filled with audience members.”

Flanders estimates that about 80% of the entire 20-year refresh to the school is complete, and the fine arts wing will be one of the last major construction projects on the school.

“We will finish up, technically, next summer,” Flanders said. “We have completely finished with the academic refresh, the gyms [and] the arena. We will be starting the fine arts refresh this summer. After this summer, there will [only] be some small minor projects going on.”