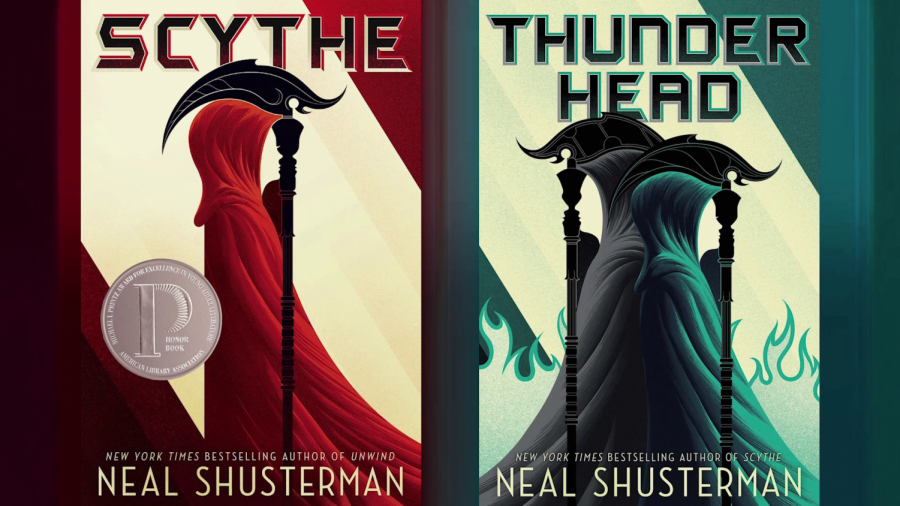 With precision and careful planning, author Neal Shusterman has successfully executed his new novel, “Thunderhead,” which is the second book in the “Arc of a Scythe” series following “Scythe.” Despite a few minor setbacks, Shusterman has continued to engage and inspire me with this striking sequel.

Thunderhead begins nearly a year after the winter conclave where Citra was ordained as Scythe Anastasia and Rowan escapes being gleaned and goes into hiding, later becoming the vigilante Scythe Lucifer. As Scythe Lucifer, Rowan hunts down corrupt Scythes to strike fear into the New Order. Citra, as Scythe Anastasia, gleans with honor and compassion to set an example for junior scythes and oppose the New Order. With different approaches, both hope to change the fate of the Scythedom. But where there is change, there is opposition. Meanwhile, the Thunderhead, the artificial intelligence in charge of caring for humanity, is forbidden from interfering with Scythedom affairs and can only observe. But it is troubled by what it sees, and is determined to help Citra and Rowan without breaking its own laws.

At first, I was let down by how slow the plot was advancing. Thunderhead gets much better after about 200 pages because several events happen that push the plot along. However, in the first half of the book I felt as if I was being kept in the dark regarding where the plot was going or why. It was frustrating because of my high expectations after “Scythe;” it was almost boring to read for the first 200 pages. Despite the rocky start, the last half of the book was paced nicely and the storyline was amazing. I’m glad I kept reading because the ending to “Thunderhead” is like nothing I’ve ever read before.

Shusterman is careful not to idealize the Scythedom or the future setting of the series (except for the Thunderhead). He makes the world the characters are living in very similar to ours as far as setting and materialism and he has a casual writing style that is relatable to the reader. His world reflects the flaws of our own because of their similarities.

The entire concept of the “Arc of a Scythe” series is something I’ve never read in a book or seen in a film before. Shusterman’s originality with the plot in this series is something so hard to find now in novels. Many times while reading “Thunderhead” I found myself in awe, wondering how he came up with the idea for the series.

One of my favorite parts about the book is the Thunderhead itself. After every chapter, there is an excerpt of the Thunderhead’s thoughts that have relevance to the chapter or foreshadows something coming up in the book. The Thunderhead is supposedly an ideal, perfect being who never makes mistakes, so it’s almost enlightening to read insights from the Thunderhead. This is just one of many features that add a level of authenticity to Shusterman’s novel.

Overall, “Thunderhead” met my high expectations as a sequel to an already excellent novel. After all the nasty surprises and unexpected twists making up the ending, I can’t wait for the third installment of “Arc of a Scythe” and whatever surprises it will bring to the table.