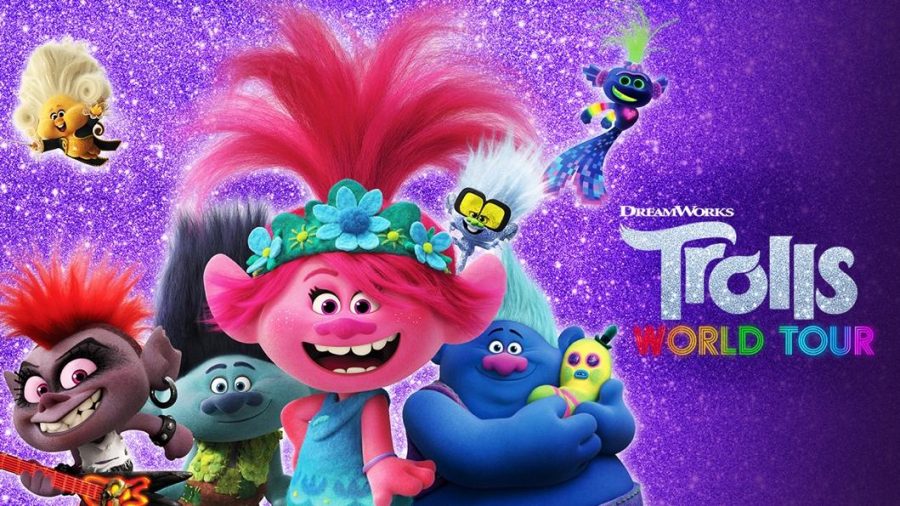 After a 42-month wait, my favorite colorful and hug-filled world is back. “Trolls World Tour” was released on April 10 on various rental services instead of in theaters due to COVID-19. This movie is the perfect mood booster for all ages.

In “Trolls World Tour,”the queen of the pop trolls, Poppy (Anna Kendrick) discovers there are other trolls in their world, and they each have a string that represents their genre of music. Poppy receives an invitation from the queen of the rock trolls, Barb ( Rachel Bloom). The invitation asks Poppy to bring her string to Queen Barb’s world tour. Poppy always sees the best in everyone, so she sets off with her friend Branch (Justin Timberlake) to unite her string with all of the other strings at Queen Barb’s world tour. However, Barb plans to use the strings to unite everyone under rock music and eliminate all other music genres, so Poppy and Branch find a way to save all music.

With most great movies, I usually find the sequels to be disappointing, and while “Trolls World Tour” was different in the main message from the first “Trolls” movie, it did not let me down. I love the message this movie sends to children watching it. It teaches kids that they need to embrace their differences and be proud of who they are without changing themselves to be like everyone else. I think this message is important for kids to learn before they are released into a world of social media that teaches them to be like everyone else.

While I enjoyed the movie, the one thing that I found disappointing was the music. In the first “Trolls” movie, the music was great and a few songs became popular, but in “Trolls World Tour” there weren’t as many songs, and I only liked the songs “The Other Side” by Justin Timberlake and SZA and “It’s All Love” by Anderson .Paak. I was especially disappointed in the ending song, which I figured would be the best song in the whole movie. The lyrics were fine, but the overall beat and background music were confusing and didn’t mix well because they tried to combine all the genres of music.

Overall, I enjoyed this movie; it’s great what they are teaching kids, because it’s really important to learn to love our differences. Although the music was not my favorite, there weren’t many songs, so it didn’t ruin the movie for me. This movie is perfect to watch with your whole family during quarantine, especially on the days when you need extra rainbows and hugs.