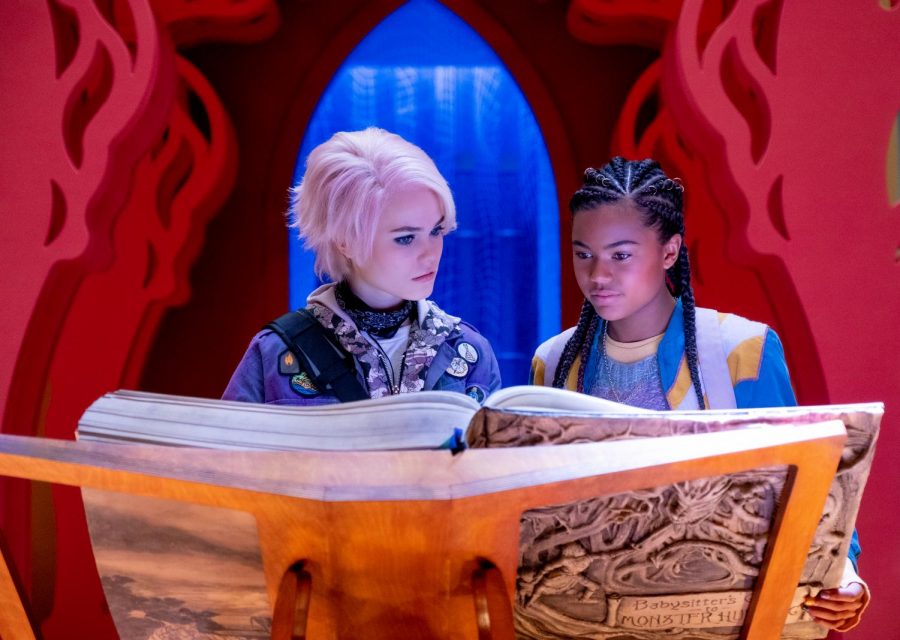 Scary movies are a great way to get into the Halloween mood, and kids movies can be funny and provide some quick entertainment for families, so why not combine both? I’m sure that’s what the creators thought when they pitched “A Babysitter’s Guide to Monster Hunting.” Unfortunately, they were wrong. The movie attempts to be scary and funny, but fails at both. “A Babysitter’s Guide to Monster Hunting” is “Spy Kids” with better CGI and less nostalgia, making the bad moments even more unbearable. I began watching the movie with low expectations and still left disappointed.

The movie begins with brainiac, awkward teen Kelly Ferguson (Tamara Smart) recalling her dream: an encounter with monsters that she had as a child. She is often referred to as “monster girl” because of her claims. On Halloween, Kelly and her friend want to attend a party; however, Kelly’s mother intervenes and forces her to babysit for her boss. Kelly is tasked with taking care of a poorly behaved, insomniac child named Jacob (Ian Ho). When attempting to fall asleep, Jacob is captured by the Grand Guignol (Tom Felton), the antagonist of the film. Seasoned babysitter/monster hunter Liz LeRue (Oona Laurence) then shows up to rescue Jacob. Liz and Kelly desperately work together to save Jacob before his strict mother comes home.

While the concept is not bad, the execution was abysmal. Throughout the movie I found myself confused with the details of the plot. One would be hard pressed to understand more than the basics about the babysitter society that is so pivotal in the movie. After watching the movie and doing some research, I still do not know the secret society’s name.

Poor pacing plagued the movie; at times I felt like everything was rushed and at others it was like moving through molasses. Because the beginning was so rushed, I was genuinely confused on what was going on. One second, Kelly is on the phone with the police to report Jacob’s abduction, and the next, Liz suddenly appears to help.

Although the pacing was poor, the biggest thing that held the movie back was its lack of character building. This may be a result of its rushed nature, but the movie would simply introduce characters without telling the audience anything about them. This was true even for the main characters. All I knew about Kelly was that she was smart and scared of monsters. That’s it. That’s her whole character.

Liz wasn’t much better; she’s introduced as a smart-mouth, serious, experienced monster hunter. Turns out she’s not that good as she’s been scarred by the loss of her brother to the Grand Guignol, something we didn’t find out until halfway through the movie. This seems important, and it is, just not in this movie. Her brother is an afterthought as he is not even with the Grand Guignol, but is somewhere else that the characters don’t know yet. This lack of character development led me to feel apathetic toward their concerns, which is among the greatest failures a movie can have. If I don’t care about the characters, why am I even watching ? It’s certainly not because of the excessive CGI or poor attempt at horror.

Despite the surface level explanation of the characters, this movie was not all bad. Curtis Critter (Ty Consiglio), a potion maker within the secret society, was amusing and reminded me that child actors can be somewhat funny. Additionally, some clever lines stuck with me and gave me hope that the writing would improve. However, the only times I laughed out loud were at scenes I don’t think were intended to be funny. For example, when the Grand Guignol is first introduced, he jumps out of the closet and proceeds to yell, “What’s up Rhode Island?” The absurdity of the line forced me to chuckle. My inability to take anything in the movie seriously is the ultimate downfall of the film.

Overall, the movie attempts to be a family-friendly horror movie that everyone can enjoy, but the movie is so bland that no one will. The creepy moments were never scary and the funny ones never hit their mark. Even with all of this, it is clear the film is just an introduction to the story and that more films will be made. I have hope that the upcoming movies in the series can surpass their predecessor; however, I will never know if that is the case as I will not be watching.