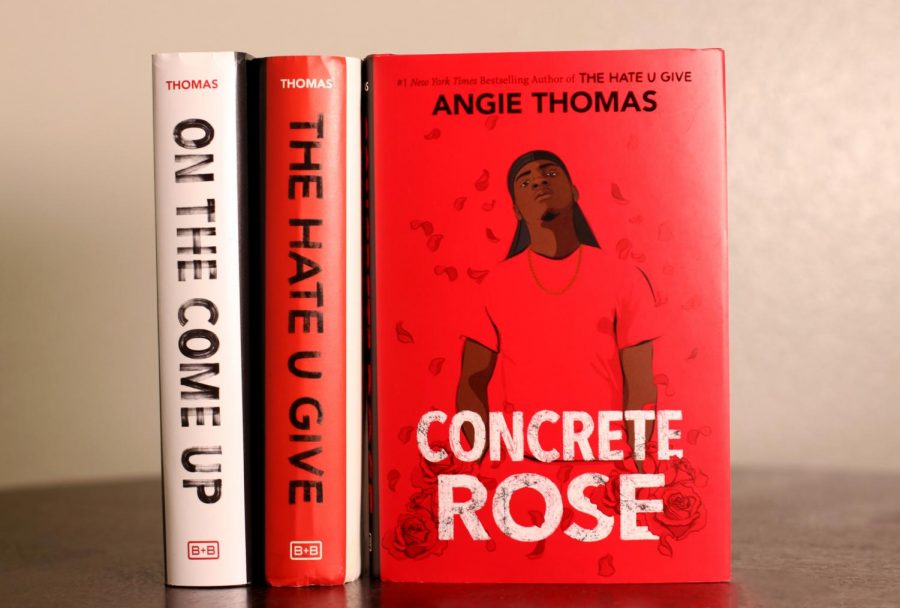 “The Hate You Give” series by Angie Thomas

The prequel to Angie Thomas’ “The Hate U Give,” “Concrete Rose” was released Jan. 12.

Thomas’ 2017 debut novel, “The Hate U Give,” focused on an incident of police brutality in Garden Heights, a fictional, inner-city neighborhood in California. It was told through the perspective of the victim’s friend, 17 year-old Starr Carter. “Concrete Rose” is set 17 years prior to “The Hate U Give” and features Starr’s dad, Maverick, as a teenager.

Throughout the events of “The Hate U Give,” Maverick was an encouraging and supportive father, making him my favorite character. His character had something of a redemption arc from his gang-associated, drug-dealing days, so I was interested to see 17 year-old Maverick in the thick of it.

The first half of “Concrete Rose” feels more like a slice of life than a book with a driving plot as Maverick cares for Seven, the newborn he thought was his friend’s son, but is actually his. “Concrete Rose” focused on teen fatherhood more than Maverick’s life in his gang, the King Lords, an unexpected but not unwelcome focus. Many characters from “The Hate U Give” appear in “Concrete Rose.” Seeing Starr’s parents’ relationship as teens was incredibly cute. Familiar characters as well as additional fixtures to Garden Heights made for an amusing, colorful bunch.

Upon finding out about Seven, Maverick’s cousin and mentor, Dre, forces him to stop dealing drugs and to instead be an “associate” for the gang — affiliated but not dealing. While juggling parental responsibilities, work and school, Maverick tries to resist the draw of the financial comfort drug-dealing would provide.

One of my biggest grievances with “Concrete Rose” was Maverick being too valiant through his hardships. He responded to his struggles like an ideal teenager would, not as a real one would. I wish we would have seen him break down more or even heard more inner turmoil. His striking resemblance to the responsible, noble adult Maverick in “The Hate U Give” diminished the satisfaction of his character’s growth. A plot point that I loved was Maverick’s relationship with his dad, Don, a well-known former King Lord and current felon. Maverick’s predicament in deciding between his own, better path or living up to his nickname of “Li’l Don” was a compelling element.

Around the halfway mark, the plot sped up so dramatically that I didn’t want to put this book down. “Concrete Rose” is harrowing, hilarious and heartfelt in its last half. I loved how intense rising tensions between Maverick and his best friend, girlfriend and dad made the story. “Concrete Rose” ends on a gratifying note, coming perfectly full circle to “The Hate U Give.” The excitement of the last part made the relaxed pace of the first well worth it.

“Concrete Rose” is, in its entirety, a sweet and exciting addition to Thomas’ collection that I encourage all “The Hate U Give” fans to read.