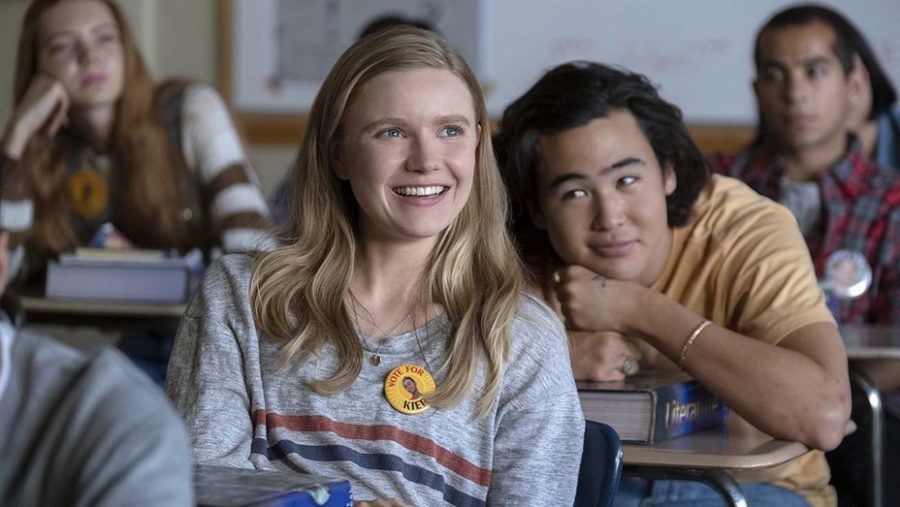 Netflix released the Amy Poehler produced movie “Moxie” on March 3. The film follows cookie-cutter teen Vivian (Hadley Robinson) turned feminist rebel after looking through the riot grrrl scene mementos of her mother, Lisa (Amy Poehler). After the boys at Vivian’s school make a classic list ranking the girls and their desirableness, Vivian makes an anonymous zine, called “Moxie,” to condemn misogyny and promote gender equality. She befriends the politically active new girl Lucy (Alycia Pascual-Pena) and they form a growing girl gang to take down the principal, who doesn’t seem to care about the rampant sexism, and the jerk quarterback, Mitchell (Patrick Schwarzenegger).

I was anticipating the release of this movie because it seemed to be something I would really enjoy. I found myself hoping it would start meaningful conversations about feminism in schools and how important young, diverse voices are. I decided to keep my hopes low because feminism and teenagers tend to be portrayed poorly in many forms of media, and I’m glad I did. I believe this is a film that my angsty 15-year-old self would have based my whole personality around but, having watched it at 18, I experienced copious amounts of second-hand embarrassment.

The movie opened with a well-known scene: jocks, nerds, cheerleaders and outcasts all gathered in the schoolyard before the first day. These cliques are so overdone and outdated; by now, we all know that high school is not like that. I could tell Poehler was directing 20-year-olds to act like teenagers, which results in cheesy cliches and awkward moments. This distracted from the message the movie was trying to convey, but didn’t ruin the viewing experience.

I loved the feeling I had while watching “Moxie.” The relationship between Vivian and Seth (Nico Hiraga) was charming and fun. I also loved the friendships demonstrated in the movie; the cast reflected the relationships many students experience in real life. Non-toxic relationships are hard to come by in teen movies, so I greatly appreciated the supportive and sweet nature of Vivian’s connections.

The diverse cast was definitely a step in the right direction and accurately conveyed the message of gender and racial equality. Feminism is not just a straight, white women’s issue. Feminism is an issue for everyone: transgender women, BIPOC women, LGBTQIA+ women and even men. I believe “Moxie” illustrated this in a tasteful way because these minorities being represented in the film industry don’t need to be explained – they should just be there.

While it wasn’t the most powerful and meaningful execution, I would still recommend watching this cute coming-of-age movie. Chock-full of adorable moments, feminist rock music and female friendships, watching “Moxie” won’t be a waste of your time.