Godzilla vs. Kong: cool fights and nothing else 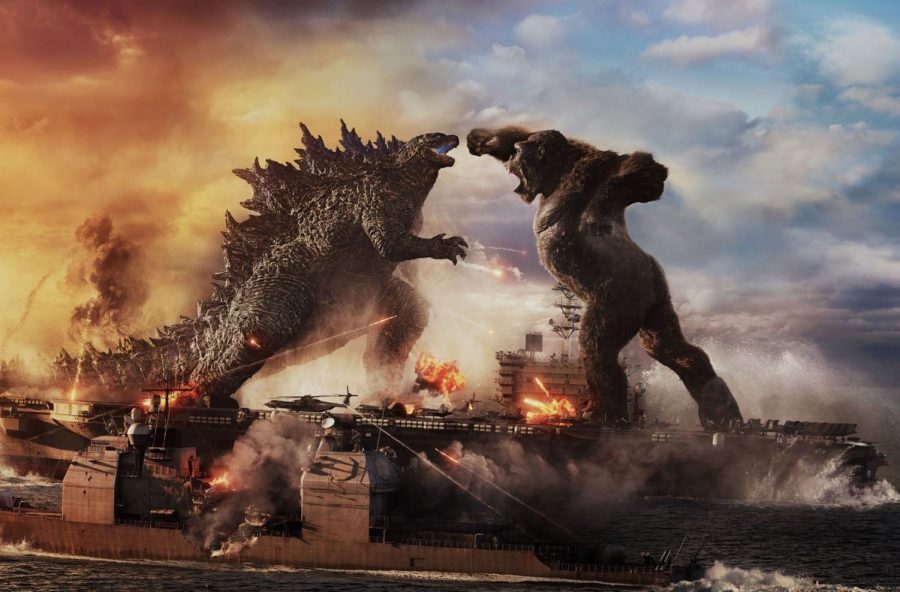 Not every movie needs to be a cinematic masterpiece and “Godzilla vs. Kong,” which was released on March 31 in theaters and on HBO Max, is a great example of that. Is the movie good from an objective standpoint? No, not even close. However, the movie, if watched in the right setting, can be entertaining.

The film is nothing new — two hours of action that includes quality fight scenes and a dull plot. The movie begins by introducing Apex, a technology company responsible for protecting Kong, being attacked by Godzilla. This attack prompts Apex to use Kong to search for a power source that can be found in Middle Earth and protect humanity from Godzilla.

Along their journey to the entrance of Middle Earth in Antarctica, Godzilla and Kong clash for the first time while on an aircraft carrier. Kong and the rest of the crew narrowly escape and continue their journey to Middle Earth where they eventually are successful and retrieve the power source. Godzilla, who is currently destroying Hong Kong, becomes aware of this and begins his attack on Kong.

The two titans battle for the last time, with Godzilla being victorious. The triumphant Godzilla is then met by Mecha-Godzilla who was powered by the energy source Apex was searching for in Middle Earth. Kong, although on the brink of death, joins Godzilla to defeat Mecha-Godzilla and as the movie closes, the two titans go their separate ways.

If you had trouble understanding what I just wrote — congratulations! — you have now basically felt what I and many others experienced while watching the movie. The plot is sporadic, jumping from character to character with no real explanation. I spent a large portion of the movie simply asking what was going on.

The only thing worse than the plot in this movie might be the characters. I understood more about the feelings of a big monkey who can’t talk than I did Millie Bobby Brown’s character, Maddison Russell (I had to look that name up even though I watched the movie only a few days ago). Her character provides nothing but confusion. The only logical reasoning for her character being included is that the production company needed an actual person to use for marketing, since a big ape wasn’t good enough.

Lack of character development and explanation is true for most characters, not just Brown’s. It was unclear who was the main antagonist of the film until the last 20 minutes, and even then I could count on just two hands the amount of scenes they were in. Some of the most prominent villains had only a couple of lines. This is far too little when you already have two main characters who can’t speak. No I’m not talking about Kong and Godzilla, I’m talking about Kong and the little girl who is deaf and has more lines than anyone else in the film, but only speaks in sign language (oh yeah, the girl is Kong’s BFF by the way).

Much like the aftermath of the Godzilla attack in the beginning of the film, the movie was a disaster. The cool fight scenes and high quality visuals couldn’t make up for the horrendous plot. The only entertaining way to watch this film would be with friends, so you can bond over the shared experience of watching this extraordinarily bad movie.

Luckily, “Godzilla vs. Kong” has been released on HBO Max so you can at least laugh at it in the comfort of your own home. Although it had a few bright spots, the movie fails to deliver a complete plot and interesting characters, leaving you with just a couple of big animals fighting. Even with all the hype surrounding it, “Godzilla vs. Kong” misses the mark.