The Hawk Eye • May 14, 2014 • https://www.hebronhawkeye.com/entertainment/art/2014/05/14/worms-eat-my-garbage-apes-teacher-worm-composts-to-help-environment/ 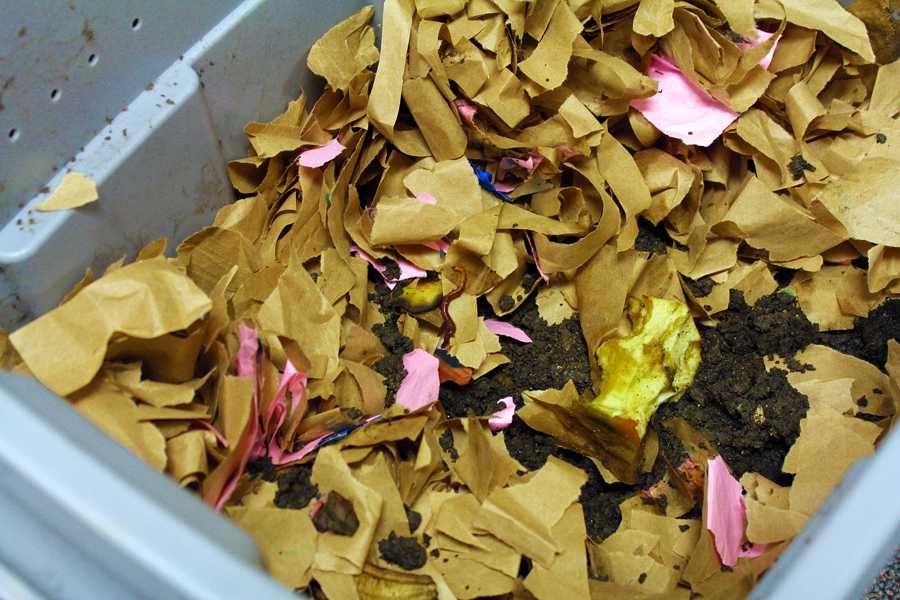 The putrid smell like garbage. That’s the first thing people notice before the sight of all the worms crawling up the sides and the shredded paper layering the tub. The smell wafts out and spreads throughout the AP environmental science (APES) classroom. For APES and chemistry teacher Patricia Ehsani, this classroom environment is worth it.

Ehsani created a container full of worms, leftover food, and shredded paper because the worms eat the trash which keeps garbage from piling up at the landfill and composting adds nutrients to the soil. Ehsani started worm composting in 1995 after taking a class and is now certified as a master composter.

“I’m interested in nature and trying to make the environment less impacted by humans,” Ehsani said.

Ehsani’s interest in nature made her want to involve her APES students by letting them set up the worm bin and feed worms. Her class also created “mini dumps” that show the students what decomposes at a landfill and what does not. Ehsani’s experience as an APES teacher became another outlet for her interest in nature and got her a class of volunteers to set up the worm bin.

“Being an APES teacher … I had to learn a lot of stuff which led me to become a master naturalist,” Ehsani said. “Master naturalists do volunteer work like trying to restore the prairie up at Lake Lewisville, but [the worm bin] is just an extension of interest in nature.”
Composting can significantly help the environment, but water shortage is also a major concern to Ehsani. Students can save water by taking shorter showers, not using the toilet as a trash can and using rain barrels to collect rainwater to water outdoor plants. Ehsani also recommends a class, sponsored by Texas A&M AgriLife Research and Extension Center, to make a rain barrel for $25 on May 12 from 6:30 pm – 8:30 pm at the Bedford Public Library. “Water to me is a major concern,” Ehsani said. “We’ve got cities drying up in the country. I have a rain barrel that collects water that I use for outdoor plants.”
According to Ehsani, the more people who join in to save the environment, water conserving and worm composting alike, the better. Faculty members Catherine Meldrum, Christine Billingsley, Heather Brandon, Liz Harrison, Emily Clay, Dawn Oyepide and Annette Reese have already accepted Ehsani’s invitation to start their own worm bins.

“My husband and I have a blackberry farm in our backyard,” librarian Liz Harrison said. “We harvest gallons and gallons of fresh blackberries every summer and make blackberry jam and blackberry cobblers. I thought the worms would be a good thing for the soil.”

Billingsley also agreed to the idea of a worm bin to teach her sons about recycling while satisfying their interest in worms.

“I thought the worm bin would be a great way to show [my son] about recycling our waste for something useful and good,” Billingsley said. “He always wants to know why things happen and he will get to watch the entire composting and fertilization process to help plants grow.  And honestly, he and his younger brother love worms so they’ll get a kick out of watching them work.”

According to Ehsani, worm composting has many benefits for the environment.

“When you have worms eat your garbage and you don’t put it in the garbage disposal, that’s less for the wastewater treatment to process. If you don’t put it in your trash can, that’s less that goes to the landfill that to cause methane gas which is stronger than greenhouse gases like carbon dioxide. There’s a lot of benefits to worm composting, and not just for plants, but it makes it cheaper to process for the city.”

According to Ehsani, worm bins are low maintenance and easy to create.