Parent by morning, coach by night 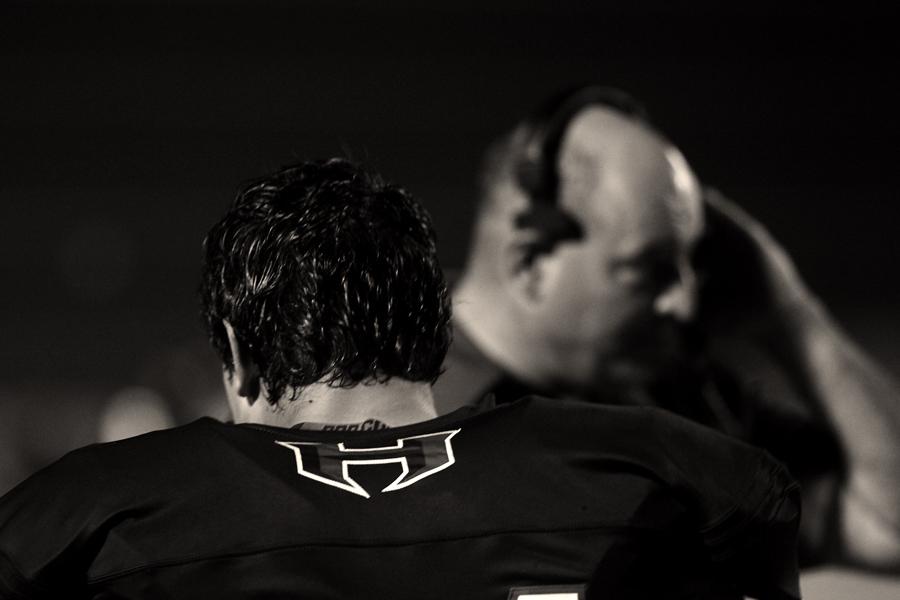 [vc_row][vc_column width=”1/1″][vc_column_text]The two of them together make for a cheerful atmosphere, one that resembles enthusiasm for the game they love. The pair shares something that most fathers and their sons would want to have: The privilege of being together on the same field on Friday nights.

Brian Brazil has been Hebron’s head football coach for 14 years, with a string of winning seasons, several playoff appearances and a state championship in 2005. Beginning in 2011, however, he began coaching his son David at the high school level for the first time. David, now a junior, is playing on varsity for his second straight season and starts at defensive end. Some wonder how Coach Brazil is able to balance being a parent and coach at the same time.

“He understands here I’m coach, and at home he understands I’m dad,” Coach Brazil said. “Here he’s my son, but he’s also a player for me. It’s probably, to be honest, a lot harder on him than it is me. I’m sure it is [harder] because he takes a lot more criticism about being a coach’s kid and whether he’s getting preferential treatment.”

Despite football players’ perceptions, the Brazils spend their free time away from football.

“He likes beating me in Black Ops and all that stuff; he just slaughters me,” Coach Brazil said. “We just enjoy our time with each other and with our family. We love quoting movies. We quote almost every stupid movie there is.”

Coach Brazil is all business when it comes to practice and games, but David helps to prove that there is a fun side to coach off the field.

“He’s a great singer,” David said. “He’s not bashful about singing. He loves singing in the car, during Hebron games, or after we win.”

It’s only David’s third season playing for the Hawks, but already many significant football memories have been made. It was tough to choose, but they each managed to share their favorite one.

“I’d probably have to say the first year I was playing football, and I didn’t really know what I was doing that well and I just blitzed up the field and I hit a kid pretty good,” David said proudly. “I thought I just tackled him. My dad came up and nailed me in the head and was like ‘There you go!’ I was the only one who was pumped up about the next game and everyone else was like ‘Why are you excited?’ and I guess it was because my dad hit me in the head and it got me pumped up.”

“Mine’s kinda funny,” Coach Brazil said thoughtfully. “It was David’s first day to be a ball boy at Hebron.  [The game] was at Birdville Stadium, and we got there and he had every ball out of the bag. He was kicking them and he was running up and down [the field] with them. He was having the time of his life and I just couldn’t help but laugh and smile just watching him enjoy it so much. I guess it was because it was my first varsity game where David was there with me on the sidelines and it was just kind of a special time.”

Coach Brazil made it to training camp for the Houston Oilers back in his own playing days. For David, however, he has a more important life goal that doesn’t necessarily include football.

“My most important thing is just raising a good Christian young man who’s going to love the Lord and is going to do things that way,” said Coach Brazil. “That’s my main goal. I feel children are [a] gift from God, and it’s my responsibility to be a good role model and be a good steward with what the Lord is presenting me with.”

Football life hasn’t been flawless for David all the time, however. Like most father-son relationships, he remembers getting scolded by his dad.

“[It was] freshman year, [on the] first day of school, first practice, he yelled the heck out of me,” David said. “I remember he was chewing everybody out. He started with me and worked his way down. I’ve never seen my Dad so mad at me before. He yelled at me all day during that first practice and it was terrible.”

Family ties are those that bind. Not many know that this father-son relationship kept Coach Brazil from leaving Hebron for good.

“I almost got out of coaching four years ago,” Coach Brazil said. “One of the reasons I stayed in coaching was because of David. I had a chance to go be an athletic director. I asked David ‘How important is it to you for me to be your coach?’ He said ‘Dad, I really want you to be my coach.’ Then I thought that if my son wants me to be his coach, then there’s no reason for me not to stay in this as a coach. It was a good opportunity and a good job, but I haven’t regretted one second of my decision and I love Hebron High School. I guess my point is that Dave and I have a real close relationship.”[/vc_column_text][/vc_column][/vc_row]