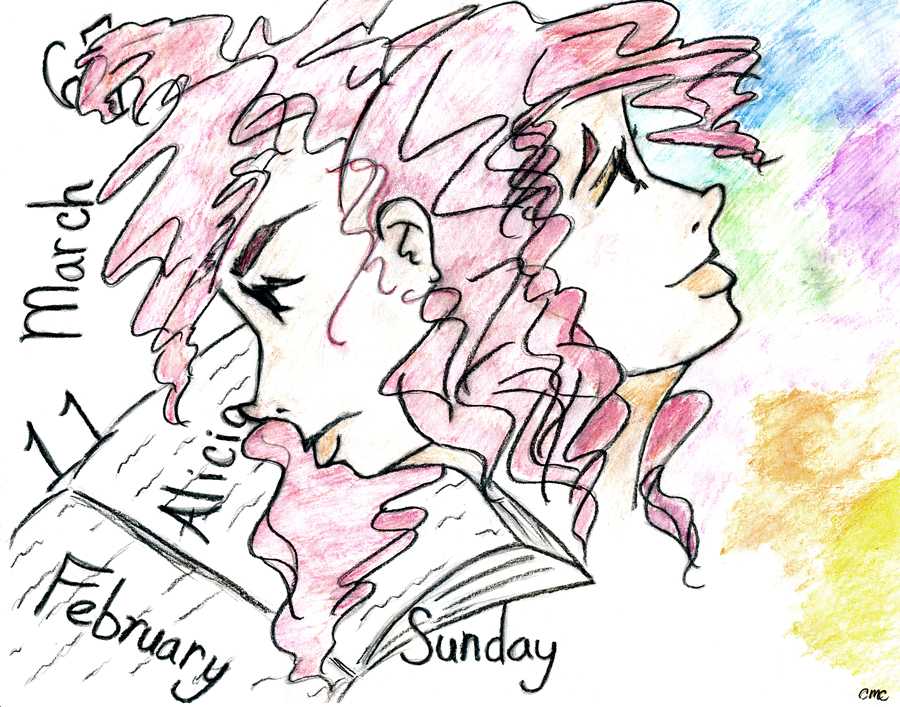 She never understood why her peers could finish problems so quickly.

Her face turned red at the fifth grade graduation ceremony during recognition for outstanding math students. Every name was called except for sophomore Caroline Burchett’s.

“I was horribly humiliated,” Caroline said. “Everyone knew it was me [who didn’t pass]. To this day I still cringe because I felt so stupid.”

For most people, names are names and numbers, numbers. But to Caroline, this color confusion is ordinary. Synesthesia is a neurological condition that causes sounds and names to have colors, textures, or tastes.

“Explaining it is hard,” Caroline said. “There’s this explanatory gap, where you can’t explain to a blind person what seeing stuff is like and you can’t describe to a ‘normal’ person what synesthesia is like. The best way to describe it is: I hear colors.”

If you came across a synesthete, chances are he or she would have grapheme-color synesthesia. This means the synesthete would hear or see letters or words and associate them with colors. Caroline not only has this type, but also sound-color synesthesia and the rare lexical-gustatory (words to taste) synesthesia.

As a child, Caroline read about other synesthetes in “The Name of This Book is Secret” by Pseudonymous Bosch. Her family suspected she might have synesthesia after Caroline’s mother Susan Burchett first heard about the disorder during Caroline’s sixth grade year.

“I saw a special on PBS on ‘Frontline’ about synesthesia,” Susan said. “When they began to talk about it, that it can be a lot of different cross wires, I thought, ‘I bet that’s what Caroline has.’”

As featured in the PBS special, Caroline experienced tastes, like spaghetti mixed with celery and strawberries, when someone walked by.

“I’m glad I have it, but sometimes I think, ‘Why do I have to be different and weird?’” Caroline said. “People give these looks sometimes and I say ‘I haven’t eaten a person, I just taste them sometimes.’”

However, like most other synesthetes, Caroline’s senses have since faded over time.

“Taste isn’t around anymore because when you grow, your brain expands and the receptors that go from your senses to the rest of your consciousness spread out,” Caroline said. “Thank God it did, because I had to chew gum all the time because all the tastes mixed together were too much of an overload.”

Caroline was convinced after visiting a section of the Dallas Museum of Art dedicated to synesthetes.

“[A poster had] ‘apple’ [written] in yellow marker and I got a headache instantly,” Caroline said. “Apple is supposed to be red. I walked through the exhibit and realized these were my people. That’s when I determined I had synesthesia.”

However, classmates don’t trust her self-diagnosis. Yet the rare disease makes testing inconvenient.

“Some will ask, ‘Where’s your proof?’” Caroline said. “When people ask me to get a brain scan I think, ‘Want to pay for it and two hours of my life I’ll never get back sitting in a tiny little room with a brain [scanner] going around my head? [Brain scans] are stupid and expensive and I already know I have synesthesia.”

Discovering synesthesia brought Caroline clarity after the years of feeling out of place, but as she grew, challenges formed, especially concerning math. As every fifth grader at Castle Hills Elementary knows, Fast Math is a computer program that pops up random equations that need an answer as quickly as possible.

“I never passed addition because numbers are colors,” Caroline said. “Five plus two will always equal eight to me because five is red, two is blue and eight is purple … But seven is green so it doesn’t make any sense because red and blue don’t make green.”

After completing addition, kids would move on to other arithmetic. For most, completing Fast Math was simple, but for Caroline, unaware of her synesthesia, it was daunting.

“I thought everyone had [synesthesia] and I was confused why everyone could pass math so fast,” Caroline said.

Languages can also be confusing. The color of a word in English may not be the same in Spanish.

While Spanish and math class cause Caroline confusion, English brings joy. “Tiger Lily” by Jodi Lynn Anderson gives Caroline an opportunity to use synesthesia for fun and beauty.

She also finds solace in her older brother’s fascination of the disorder.

“I brag about it all the time,” junior Cameron Burchett said. “I can be listening to a song I love in the car and say, ‘Hey, what color is this?’ and it’s really fascinating.”

Caroline’s love of music can also be seen in her involvement in the Belle Chanson choir. Her voice part of soprano two, Caroline said, is a shiny, turquoise color with the texture of violin strings.

“It’s really cool to see the colors of the music as we create it,” Caroline said. “When we first learn a song, the colors seem very blunt and one dimensional, but as we turn it into a song, the experience is so beautiful.”

Due to her synesthesia and choral experience, Caroline’s music taste is wide ranging, and different levels of complexity in a song can contribute to the colors and textures she sees.

“‘Mary Has a Little Lamb’ doesn’t have a texture,” Caroline said. “[But] ‘Don’t Stop Believing’ has a rainbow of different colors and textures like watercolor. It’s like looking at carpet and [then] looking at fireworks.”

While Caroline loves choir, painting allows her to express her synesthesia, but it also brings frustration.

“Knowing the color of the song and feel of it is different in your head than trying to get it down on paper,” Caroline said. “In your head, it’s moving and on paper it has to be standing still … I try to see in what ways I can make a white page the same as what’s going on in my head.”

Even though the Burchett family loves her paintings, Caroline has high expectations for her artwork.

“Sometimes I hate it,” Caroline said. “It’s not the same as it is in my head and I can’t get it exact, but there are sometimes where I’m really proud when I do get it done.”

Despite how critical Caroline is of her artwork, Caroline’s parents are supportive of her.

“It is a fun expression of who Caroline is,” Caroline’s father Chris Burchett said. “It’s a way of looking at the world that I don’t see. It enriches my world to see the colors that she sees.”