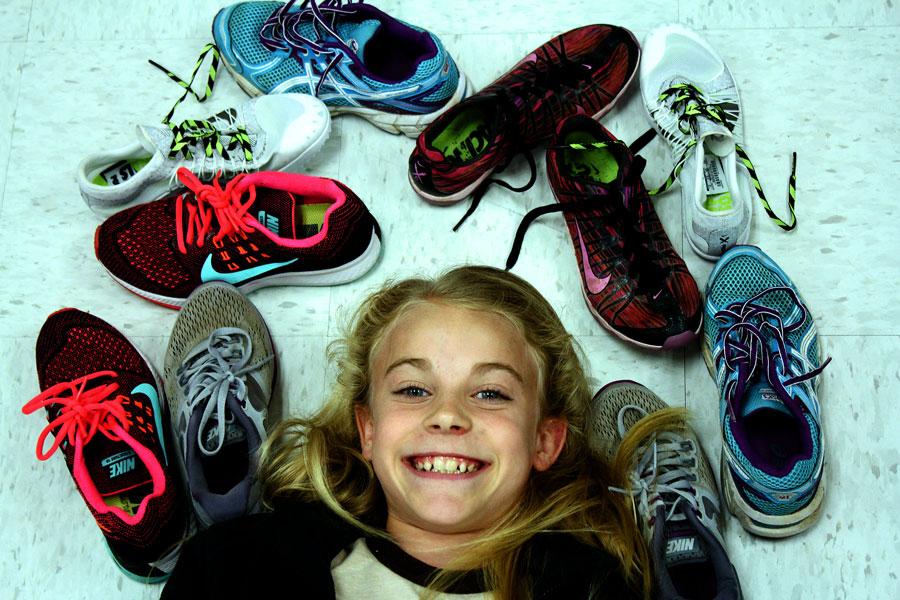 Sweat and mud leave traces on her leg. Her long blonde hair catches in the wind and she sees the finish line with fire in her eyes.

From birth, freshman Abby Riordan has always been full of energy and athletic talent. At age four, Abby began playing soccer. At age eight, her team won the state championship. Later on, she picked up basketball and running. Abby grew to like running more and pursues it with a heartier interest than basketball or soccer.

Eventually, there was no stopping her. In the Fall, Abby rose to the top of the varsity cross country team and won the 6A state championship.

For a freshman, this is an incredible feat. However, Abby is not a typical freshman. Abby skipped kindergarten and fifth grade, both while living in New Mexico.

“It was weird at first but then I just settled in,” Abby said. “Everybody was really caring and nice.”

Abby comes from an athletically talented family. Her older sister Tyler is on the golf team and her younger sister is already involved with ballet at age seven. Their mom, Randi Riordan, coaches and teaches at the 9th grade center. From early on, Randi has coached Abby in soccer.

“I really did like coaching her,” Randi said. “I was no easier on her. In fact I was, and still am, more hard on her than I am on other people. It’s because I expect more from her. Which probably isn’t fair to her, but I do.”

Abby is 13 years old and has already accomplished more than the average 18 year old. Besides joining her team in the state championship, Abby also competed in the Nike Cross Nationals, where the team placed eighth. Now that cross country season is finished, Abby competes on the track and field team running the mile and two-mile. At the last track meet, Abby won the mile, with a time of 5:22.

“I just went out as hard as I could,” Abby said. “I knew that I wanted to win the race so I just pushed myself until I did. I was really happy and I knew my training had paid off. [My favorite experience] is the finish. When I know that I’m done with the race, I just sprint it.”

Abby is not all hard work in humility, but is also grateful for the friendships she’s made with her teammates.

“We are really close and hang out outside of school,” Abby said. “It’ll be hard next year without our senior, Megan [Montgomery], because she’s the best and helps our team out a lot.”

Being such a gifted athlete and student, Abby has many possibilities for her future. By the end of the school year, Abby’s goal is to break 5:20 for the mile time, and by the time she graduates she wants to break 5:00. Despite her clear success and achievement, Abby only started running last summer. In regards to her future, Abby wants to run in college, but after that is not sure.

“I think she deserves all the credit she’s been given because she works for all of it,” Randi said.