Are You Ready For the Magic? 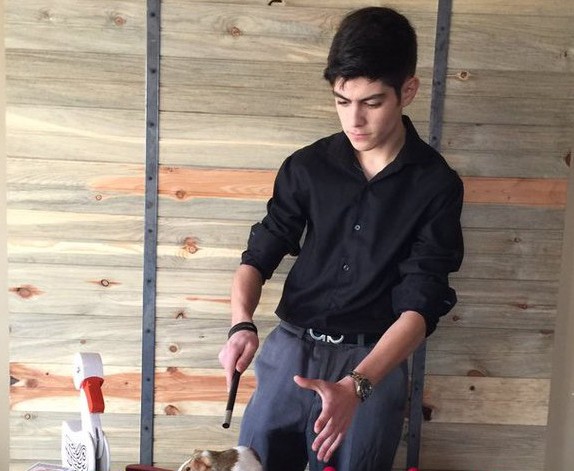 Junior Fernando Krasovsky walks down the hallway, heading toward his usual lunch destination. Suddenly, someone he doesn’t even know stops him and begins prodding him to perform a magic trick. He stops, smiles and jumps into a routine that he has practiced countless times.

“It happens to me at least once a week,” Krasovsky said. “It definitely helped me meet new people. It’s cool to see that most people know me and my magic.”

Krasovsky came here three years ago, shortly after immigrating from Mexico. He understood English but struggled to speak it, preventing him from conversing with others. He needed a way to express himself.

“When I moved here, I found a deck of cards in my house,” Krasovsky said. “I Googled how to do a basic card trick, and I failed 10 times before I got it right. I started to do more tricks with that same deck of cards, then purchased some trick coins. I got more and more into it, and then I started doing it at school.”

“The last day of the first week of the class, he spontaneously did an awesome magic trick,” Hayaud-Din said. “He randomly said ‘Are you ready for the magic?’ We were all confused because he was really quiet and didn’t say much. He was branching out, and he would do magic tricks for us from there on out.”

That magic trick created a bond between Krasovsky and the theater department, one he is grateful for. He attributes that bond to making life much easier for him. He felt more comfortable and even helped in this year’s production of Mary Poppins by volunteering on the sound crew.

“All the theater teachers have helped me because I see them a lot, especially since I have taken theater the past two years,” Krasovsky said. “They are the ones who have seen the most of my magic and encouraged me to start performing my magic on Fridays. That’s when I started doing magic at school. It was called Fernando Friday, and I would do a trick in my second period theater class.”

Krasovsky’s love for magic started before he moved to America, however. He has known about famous magicians such as David Blaine, Criss Angel and David Copperfield (who he thinks is the best magician right now) for a long time, but the most influential magician was his own grandfather.

“He used to do some tricks when I was young and it was really cool to see him take his finger off his hand,” Krasovsky said. “I never knew how he did that until later on. My mind was blown.”

Lately, Krasovsky has been the one blowing minds. His first job offer came right after he amazed Robert Waldo, the manager at Pie 3.14 Everyday Eatery, with a card trick.

“We were working on a busy Friday night, and this kid comes up and says that he’s pretty good at magic and wondered if I would be interested in hiring him,” Waldo said. “I had never even heard of him. I told him that he would actually have to show me, so he performed these card tricks in front of the owner and I and we both immediately said ‘yes.’ He came in and knocked our socks off and he’s been here ever since.”

Krasovsky’s job offer included coming in on Sunday mornings and keeping little kids busy while their parents got a quiet bite to eat. He puts on a magic show, and they instantly gravitate toward him.

“When you show a little kid a magic trick, they are amazed,” Krasovsky said. “It’s really cool because they’ll freak out and have no idea how you did it. They just enjoy it and don’t try to figure it out. Making them happy and excited about magic is what I love most about it.”

Krasovsky’s success at Pie 3.14 Everyday Eatery along with a marketing campaign through his magician Twitter account has created an increase in interest. He is approached for lots of birthday parties, special events and just picked up another restaurant offer. Waldo said his presence may even boost sales.

“Parents will bring their kids in knowing that they can enjoy some alone time with him there without actually having to leave their kids somewhere else,” Waldo said. “They know that their kids are taken care of and they don’t have to worry about their kids wandering off because they’re sitting and watching a magic show. It allows them to enjoy their lunch or dinner just a little bit more.”

Hayaud-Din is confident that Krasovsky has a bright future not only for his magic skills but because he is not scared to put himself out there.

“I think he’ll be very successful because he has a personality that people are drawn to and he’s entertaining,” Hayaud-Din said. “He literally and figuratively brought magic to theater. He doesn’t feel weird or like an outcast because everyone is so into what he does.”

Krasovsky performed at Hebron’s Got Talent on Feb. 21 and based his entire four-minute routine around objects inside of his lunch bag. He pulled a giant bamboo stick out of a bag, magically refilled a Coke bottle and pulled a massive scarf out of his mouth. Perhaps his most impressive trick involved cards. After he guessed the card that an audience member had picked, he asked another audience member to flip over a poster that he had placed at the edge of the stage before he started his routine. When the poster turned out to be the same as the card, the audience went nuts. No one knew how he did it.

“It’s fun to call on volunteers to help me out and have them do the magic in their own hands,” Krasovsky said. “I try not to reveal my secrets, especially for tricks I do often. I have taught basic tricks to my friends and little kids, but a good magician never reveals his secrets to a good trick.”

Magic has helped Krasovsky discover who he is. His English has improved because of it, and he has developed friendships that make him comfortable in a previously foreign environment. A hobby that he picked up has now become something much larger. He now has one goal in mind.

“I want to continue doing magic,” Krasovsky said. “I’ve gotten more opportunities to show my talents. Hopefully I can have a show one day; it’s my goal.”