Freshmen use LEGOs to assemble a robotic model of a medical innovation. 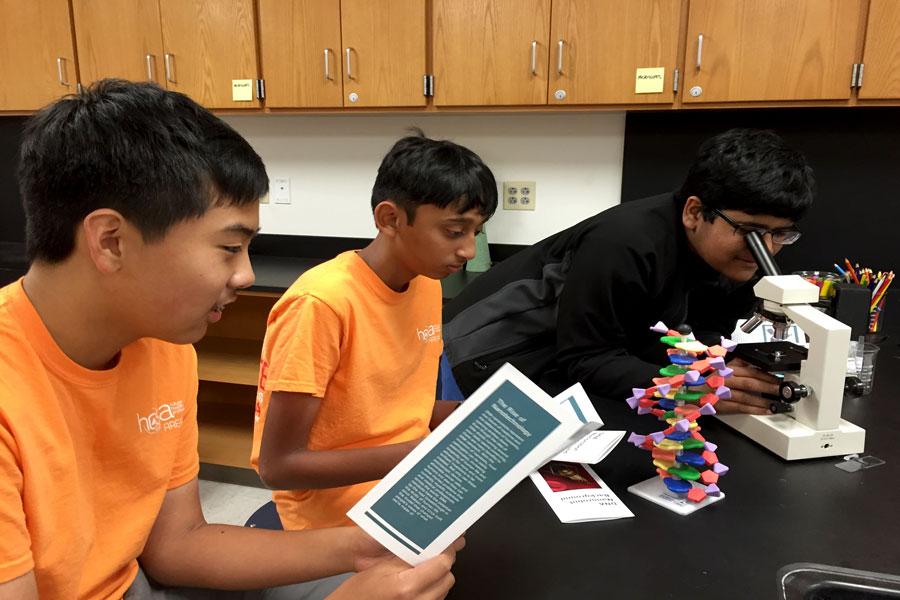 It’s the weekend and freshmen Sunil Krish, Nivedh Neelamkavil, and Justin Jiang decide to hang out. They take out their iPads and legos and begin assembling. Done. In a matter of hours they have created a robot, more specifically, a functioning macro-model of a nanobot which could potentially change the medical world.

“My group and I have different backgrounds so we found inspiration to do this project in different ways,” Krish said. “Nivedh [Neelamkavil]  wants to be a doctor and he’s very interested in how this [topic] relates to cancer because his grandpa suddenly passed away to it. Justin and I are more interested in the technological side as nanotechnology is a huge factor in the tech industry.”

This group will be the only freshmen team participating for Hebron HOSA at the state competition which will take place in Galveston Apr. 14-16.

“Making it to state for the first time is a very rewarding experience for us,” Neelamkavil said. “We didn’t really know what to expect from this, but after doing it and understanding what it’s like, it feels good because we were able to succeed. Hopefully we can get those results again at state.”

This HOSA group is participating in an event called Medical Innovation, in which they will be presenting an upcoming breakthrough in medical and technological science. For this event, the group will be focusing on DNA nanotechnology and how nanobots could potentially cure cancer.

”This event really let me work with the things I’m interested in like robotics and technology,” Jiang said. “I was also able to work with my presenting skills by working with others. It has also allowed me to compete in something important and life changing, not just for a good grade.”

When they participated in this event during area, Krish, Neelamkavil and Jiang were the only ones to win first place for their event out of the rest of the participants coming from Hebron.

“Since our team members are pretty tailored, we could’ve done HOSA Bowl or something but Sunil [Krish] is good at debating while me and Justin [Jiang] are really not,” Neelamkavil said. “So we decided to do something where all of us could participate in. Justin is really good at technology, I’m pretty good with medicine and Sunil is good at presenting, so we decided to do Medical Innovation since it involved all three skills.”

For their presentation, they have a large scale model of a nanobot which has been programmed as if it were scanning for prototype cancer cells and attacking them. To create the robotic model they used Lego Mindstorm, a programmable robot software. They adjusted the model to make it function like a nanobot releasing  the cancer killing drugs.

“HOSA is just an experience by itself,” Krish said. “It doesn’t necessarily have to be focused on one thing so that’s why I think joining HOSA would be very helpful, you can go to compete against many other peers, you can practice presenting to older people and how to persuade them to support you. So I think that this can be very beneficial to your future life.”