Kalindi Cordero: Reaching out with Hands of Hope 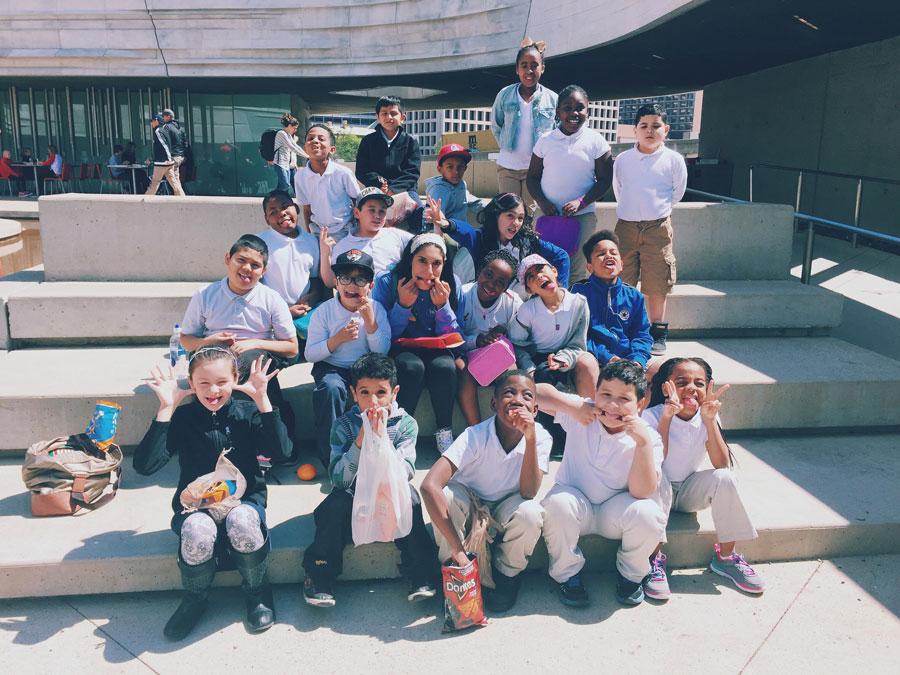 She got into her car with a load of journals that had been previously written in, and headed off to Anne Frank Elementary School.

This is a part of senior Kalindi Cordero’s usual morning routine. In the beginning of the school year Cordero started a club called ‘Hands of Hope,’ a pen pal organization to elementary school kids at title one schools (where at least 40 percent of a school’s students must be from low-income families), founded by Cordero herself.

“I have A.M. off, so I’ll go in the morning and visit, taking some of the seniors with me. We’d go bond with {the kids}, and help them out in the classroom,” said Cordero. “I’ll go in and tell them what to write about for the week or what they want to talk about with their pen pals.”

The idea for this club came to Cordero over the summer when she decided she wanted to make a change.

“I really didn’t think there was a club that would reach out to the kids that need it,” said Cordero. “I really wanted to focus on helping them, mainly minorities, because they don’t get as strong of an education as we would get, so I really wanted to branch out and find a school that I could do something to help the children’s education improve.”

Finding a sponsor for this club was easy for Cordero, and who she found was chemistry teacher Loreen Moreno.

“I thought it was a great idea, anything to help kids at title one schools,” said Moreno. “When Kalindi brings me an idea, then I’m automatically going to jump on it. If it’s something she’s put a lot of thought into then you know it’s going to be good. It turned out really well.”

Members of the club wholeheartedly agree with Moreno involving the ongoings in the club and Cordero’s major contribution to it.

“Kalindi did an awesome job with organizing it,” said junior Julia Gambell. “It’s a really good club and has a really great cause. I get to know someone who I would’ve never known before.”

Cordero was inspired to start Hands of Hope by her experience with a pen pal in elementary school. She also wanted to bring back the sentimental value of handwritten notes, after noticing that this way of communication was dying out within the new millennium.

“I had this pen pal in elementary school and I loved the idea of having this older role model to look up to,” said Cordero. “You can send a text, you can send somebody an email but there are no handwritten sentiments anymore. I wanted that to be something they experience.”

Working with children is something Cordero wants to continue towards her career, and for her  this was the place to start.

“I want to work with kids for the rest of my life and this is only the beginning,” said Cordero. “I want to be able to start my own non-profit in a third world country, or an orphanage, or a place where a child who is not able, be able to learn or get an education.”

The children at Anne Frank Elementary School were at first very shy and taken a back when Cordero first started visiting, but with time they grew accustomed to her.

“Starting out they were so reserved and we like ‘who’s this girl, why is she here,’ or ‘oh she’s not going to come back,’ but I did keep coming back,” said Cordero. “Each week they opened up more and more and share little parts of their life with me and it’s nice because they aren’t used to being able to trust people.”

In particular, Cordero has been impacted by her own pen pal, a nine year old girl named Lizette.

“She didn’t have a really good home, her mom works three jobs and her dad works two jobs. She has all brothers so I was kind of like the sister she never had,” said Cordero. “It’s crazy because there are times that she’s having such a bad day and she just finds the joy in it; and someone that’s so underprivileged like her and be able to have that positive outlook at the age of nine is insane.”

Like Cordero is greatly impacted by these kids, she is doing the same for them.

“I’m really impacting these kids lives, I’m totally making a difference, I’m totally helping them if they’re struggling,” said Cordero. “I met a couple of the kids’ parents and when they finally meet me they’re just like ‘wow, thank you so much for impacting my child and making them happy when I’m not there to give them the attention that they need.’”

Being able to provide to these children and bringing them happiness was part of Cordero’s goal with this club, and she feels she had reached it.

“It’s like my job to make them happy and to make sure they’re getting everything they need taken care of,” said Cordero. “It’s crazy to know that they love and care so much. My love for them is infinite.”

Hands of Hope has been a life changing experience according to Cordero, and for the children as well.

“Being able to give back to them is something that has changed my life this whole year,” said Cordero. “Not only that, but it’s like me changing their lives, but they’re changing mine more than I would have ever thought.”