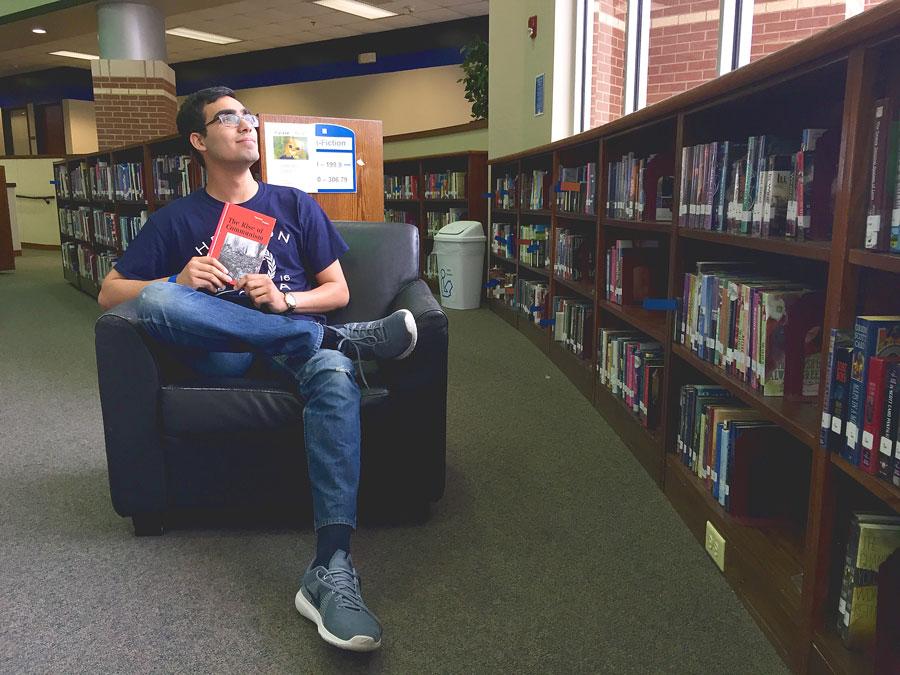 His heart was pounding. He kept wondering, “Did I drop?” while the transcript loaded so slowly it was painful. Finally, he stared at his rank.

One. The first in the school. The kid with the best grades. The “one.”

“It’s an honor,” senior Azim Dharani said. “I never thought I’d be valedictorian when I was in middle school.”

Dharani obtained the highest rank during the 3rd 9 weeks of his sophomore year.

“I was never really stressed,” Dharani said. “I’m good friends with the rest of the people in the top 10 and we always helped each other out. I just worked really hard. People always think I’m smarter than I really am, but the key was really just doing the best I could.”

“I still get to have a ton of fun,” Dharani said. “I have sleepovers and watch movies with my bros. Band gives me a lot of time to socialize and so do some of my other clubs.”

Dharani plays the bass trombone and is a band officer. He is also the president of the National Honor Society (NHS), secretary of the Science NHS, and an Eagle Scout. He created the first Boy Scout band in America.

“Band gave me a passion for music,” Dharani said. “With being a Boy Scout it seemed completely natural to combine music.”

“I really love service,” Dharani said. “It’s my thing. I love gardening too. I used to have a huge garden at my old house, but then we moved. But now I have my outlet in garden volunteering.”

Dharani’s green thumb has inspired him to become a professor in the future and research renewable energy resources. Over the summer, he will do research at Rice University and MD Anderson. He will be going to Duke University in the fall on a full-ride scholarship from Angier B. Duke.

“During the interview, it was amazing to be sitting around a table with some of the best and brightest,” Dharani said. “I was a little intimidated, but I had a lot of fun having philosophical discussions with everyone.”

Dharani also received acceptance from Cornell, UPenn, Brown, Rice, Johns Hopkins, Emory and Berkeley. In total, he received $400,000 in scholarships, $20,000 of which he received for being a Coca-Cola scholar.

“I wrote Azim his [recommendation] letter,” AP chemistry teacher Kerri Boyd said. “There are so many good things I can say about him. His personality is so down-to-earth. His greatest asset is being able to understand content quickly, teach it quickly to others and being socially adept.”

The people Dharani has interacted with agree about his personality as well as his intellect.

“Azim is hilarious,” sophomore Maryam Rizvi said. “I met him recently when I asked him a question on  {chemistry} and he started cracking jokes to help me remember a concept. He was so helpful and chill.”

Though Dharani has had success, he says his religion keeps him humble. The Agha Khan, the leader of the Ismaili Muslim faith, acts as a role model for Dharani.

“I try not to be arrogant about it,” Dharani said. “The Agha Khan has so much, but he always stays humble. All the work I put in also keeps me from getting a big head.”

Dharani will be staying in the dorms at Duke and is excited about beginning a new phase of his life.

“All I want to say to underclassmen is this,” Dharani said. “Don’t sweat the little things. Grades aren’t everything. Live a little.”