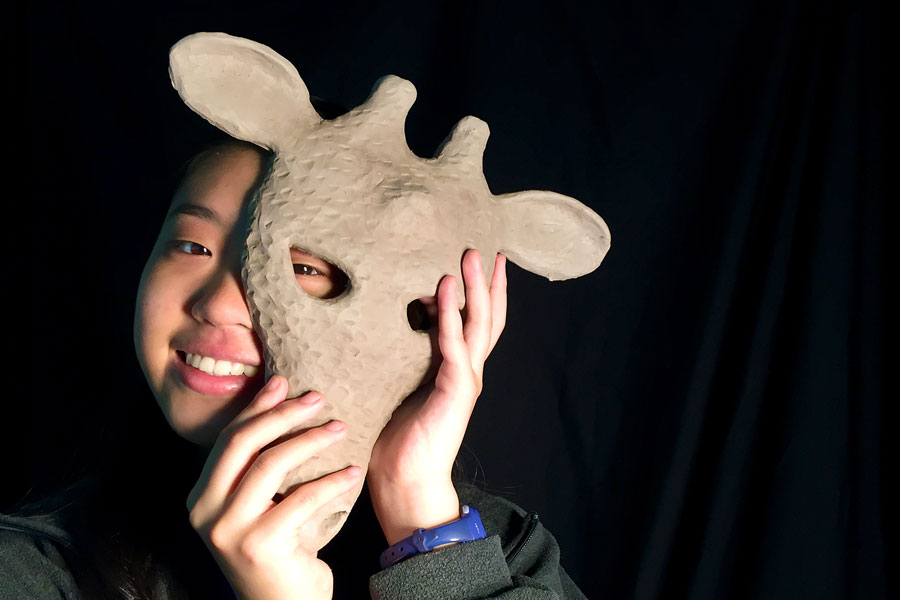 She walked around the art gallery looking for her pieces placed with the other submissions. But they weren’t there. The walkway was coming to an end and her confusion turned into worry. As she proceeded, she found a smaller exhibit that read “Gold Seals.” Intrigued, she moved toward it.  After a quick glance, she saw them. There they were, her two paintings, with the best of the best.

Both of freshman Brittney Fang’s Visual Arts Scholastic Event (VASE) submissions received a gold seal, an award for pieces that earned an exemplary rating. The award that was given to the top 150 of the 32,000 submissions statewide.

“I feel extremely honored, especially with all of the awesome art that goes to State VASE,” Fang said. “I mean, going to state is already a pretty great. I was also pretty shocked that I did, in fact, get a gold seal because the night before [my art teacher Ross] Hines had already found out the results and he was giving off the vibe that I didn’t get one.”

Fang, along with freshman Gracie Baek and sophomore Sumin Seo, were the only students in the district who received a gold seal.

“I started off doodling when I was younger,” Fang said. “It was something that I wasn’t really going to pursue. I actually was really into the anime drawing style, but I didn’t watch anime or anything like that, and I wasn’t very good.”

For her art pieces, Fang oil painted a still-life of fruit in a basket and a portrait of her sister Su Fang.

“I think every year there is always someone who is an amazing artist,” Hines said. “I remember in my high school days we never had someone as good as the students that come through [now]. Brittney is no exception. She is easily in the top 1 percent of the students I’ve ever taught as far as skills and motivation.”

After participating in Junior VASE last year in middle school, Fang began working on her two pieces which were completed two weeks before the Feb. 19 deadline.

“I didn’t develop a sort of artistic style until I began painting,” Fang said. “I find that painting is a pretty lenient medium that allows you to express yourself in many ways, in how you apply your paints and which colors you choose.”

Fang said she aims to become a curator at a museum and hopes VASE will give her the credentials to get into a good art college and receive a doctorate in art history.

“Art is a way to show progression of time and also reveal the state of the artist perhaps at the time of the painting,” Fang said. “How the media is applied and the composition of the piece can indicate things happening in the artist’s life.”

For VASE next year, Fang plans to do an oil painting of her friend and is still thinking about painting another piece or not.

“[Going to] state VASE and getting the gold seals now puts me on edge with how good the non-gold seal art was,” Fang said. “Now I’m ready to step up my game. The art world is quite a competitive one, as the world seems to have an abundance of artists and sculptors, but never quite enough jobs. I need to improve so I can hang in this tough community.”