Why he will make America great again

Senior shares why he supports Donald Trump for president 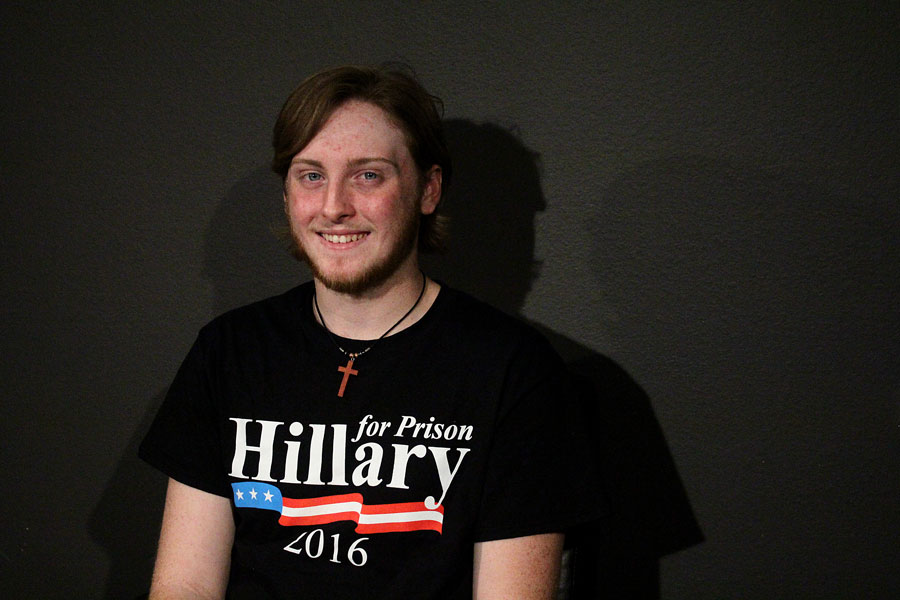 Hardaway poses in an anti-Clinton shirt.

“Man is not free unless government is limited.”

These words, spoken by President Ronald Reagan, is what senior Josh Hardaway’s political beliefs can be boiled down to. As a conservative, Hardaway believes in a limited federal government, a strong capitalist economy, and unrestricted personal freedom. He also believes presidential candidate Donald Trump will be the one to restore America to what it “once was.”

“I grew up with stories of simpler times from my grandad,” Hardaway said. “The ideal American Dream used to be you had a steady job, good friends and family, but now it seems to be you want to live and not be offended. You want to be constantly taken care of by the government and everyone is so entitled now. That’s just not right.”

Hardaway initially became involved in politics after his uncle became interested in it. His family is primarily conservative as well.

“When it comes to my family, I listen,” Hardaway said. “I sit there and I pay attention and since then we have become a lot more knowledgeable about the actual things going on in federal government. We make sure that we are in the know.”

Many Americans are left conflicted as to who to vote for in the upcoming election. While Hardaway is not part of that group, he is not exactly pleased as to how this election has turned out.

“This election has been all kinds of crazy,” Hardaway said. “There’s a lot of trying to steer away from actual agendas and [the election] has been focusing more on the controversial stuff that [the candidates] have done as people.”

Hardaway came to support Trump after seeing his economic plan.

“I’ve done like a lot of research and, in the past, Trump has said he would not ever run for president unless he feels that economically, it is absolutely necessary,” Hardaway said. “Having a businessman as president would be better because his livelihood is trading and selling and buying. And that’s something this economy needs.”

His dislike for Democratic candidate Hillary Clinton also fuels his support for Trump.

“I think [Clinton] has really bought her way to this point; I don’t feel like she’s actually earned the right to be a candidate,” Hardaway said. “I mainly don’t like her because of Benghazi and the emails, because those were both very treasonous things she did. I see her as an American traitor and that she should be put in prison.”

Because of some of Trump’s more radical beliefs, some members of the GOP have discontinued their support for him. While some Republicans view this as bad for the party, Hardaway thinks it’s a good sign.

“The GOP establishment definitely does not like him, which I like,” Hardaway said. “Whenever you have both sides of the party not liking him, while you have many Americans absolutely loving him, that for me is usually a good sign because he’s not going to let globalists or left-wingers take over. He’s going to put a stop to them.”

As a member of theater, a traditionally liberal community, Hardaway faces backlash for his conservative beliefs. According to him, Hardaway has learned to restrain from the constant debate.

“Whenever I started getting into politics more, it was hard for me to actually restrain myself and step back,” Hardaway said. “I have learned that there’s a certain point in which you need to realize the fight no longer needs to be fought, because at that point you’re going in circles.”

While the negative response to his beliefs is taxing, Hardaway says his friends and family keep him grounded.

“I do have a lot of more liberal theater friends, I also have a lot of friends in my church that are conservative and my family,” Hardaway said. “They all keep me grounded and keep me in the know and they help me not like stray off and get mixed up in the ideologies of other groups.”

Hardaway agrees with most of Trump’s beliefs. However, some of his more controversial statements have caught Hardaway off guard, especially the recent comments Trump made in a leaked video about women.

“That video was very bad,” Hardaway said. “He should have never said that, but on the same side, like there is locker room talk. I’ve definitely heard people talk like that, and it’s not okay, but I’ve definitely heard people talk like that. I don’t want to defend him, like it’s gross and disgusting but, there are more stories about him being a complete gentlemen than there are of the opposite.”

Currently, Hardaway is not old enough to cast his vote for Trump in this election. However, he plans to continue this involvement in politics, and even offers a few words of advice to future generations.

“Don’t be blind to what the government does,” Hardaway said. “Don’t believe everything you hear. Go investigate and figure out the actual solution for yourself. Don’t let other people tell you what your beliefs are; come up with your beliefs by yourself.”