Freshman violinist makes it to all-state 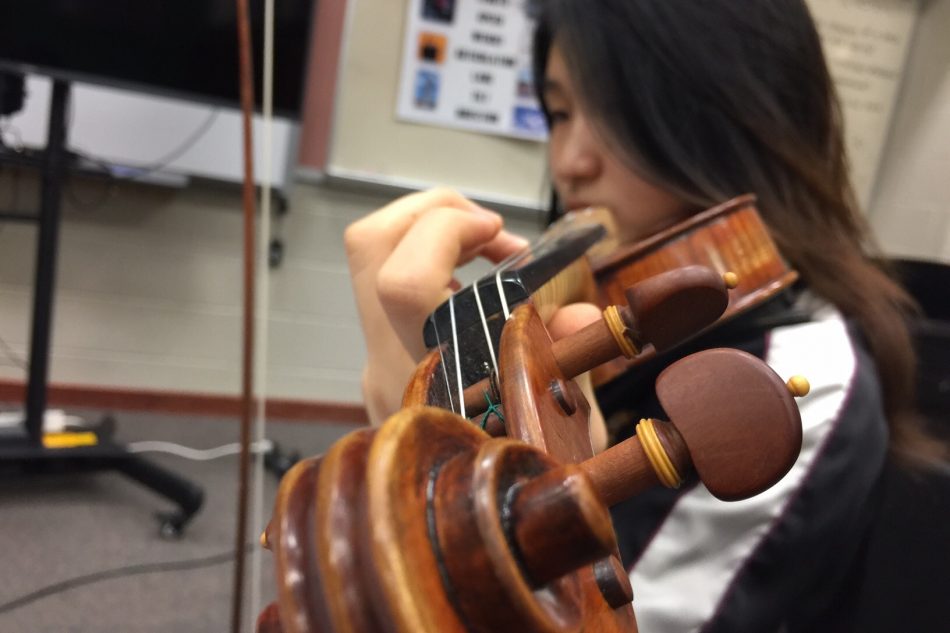 Kang practices a new piece assigned by Cautivar. Kang has been playing the violin for more than seven years and has been a part of an orchestra for more than three.

Fifth grader Grace Kang walked into the Killian orchestra room, in hopes of making it into the top orchestra possible in the middle school. Now, as a freshman, Kang looks back at her achievements as she has now made it to the best orchestra in the state.

The three all-staters, Kang, sophomore violinist Elizabeth Wei and sophomore cellist Hee Jae Hong will meet from Feb. 8-11 with the other all-staters to form the state orchestra and host a music festival at the Texas Music Educators Association Convention.

The lengthy auditions for all-state began in the summer, in preparation for all-region. Those who topped at auditions for all-region were then chosen to record their audition for all-area and then all-state. During judging, half of their recordings would be listened to one day for all-area. If the student topped at all-area they would then be evaluated for all-state with their second half of recordings.

“We are extremely proud of them and I personally admire the work that they did,” orchestra director Matthew Cautivar said. “I tell all of my students sometimes to [stay] in their room and practice until it is right, and we do that for all of our music but those all-staters had all of those extra music.”

This is the first time in four years that orchestra was able to send students to all-state.

“Honestly, I didn’t really think I would make it, because I made so many mistakes,” Kang said. “I remember crying at my home from the auditions, because I really wanted to be in that team. But it’s like Hebron made a comeback with their orchestra, so I feel really honored.”

As a fifth grader, Kang auditioned for the Killian Middle School orchestra and was placed into the varsity orchestra in sixth grade. Then, she soon became the concertmaster, or first chair, of her section.

“Grace had to compete against 10, 11, and 12 graders. So for her to make it as a freshman again, it’s a huge honor,” Cautivar said. “For [Kang] to make that leap from middle school all region to high school all-state just within that span of one year [is] a huge leap.”

Before joining the middle school varsity orchestra, Kang had been playing the violin since the summer of second grade.

“This is a really stupid story but on the way home from my sister’s flute lesson we were listening to classical music on the radio and my mom asked me what I wanted to play,” Kang said. “And the only thing that was playing [on the radio] was a violin concerto, so I said violin because that was the first thing I heard but also I liked it when I started.”

When Kang joined the varsity orchestra this year, she found motivation from the sophomore all-staters Wei and Hong.

“I’m really proud and happy for [Kang] to make it,” Wei said. “Getting in is already pretty hard and for her to make it as a freshman is awesome.”

“[Kang] plays really well and has a very pretty sound production on the violin,” Wei said. “I’m super proud of her for making it to all-state since getting in is already pretty hard. For her to make it as a freshman is awesome.”

Kang now aims to audition for the Greater Dallas Youth Orchestra, which is like an apprenticeship for the Dallas Symphony Orchestra. She hopes that it can help for future auditions and help her with her style on the violin.

“I think [the violin] taught me more on how I should express myself,” Kang said. “I used to be a very angry person, I think music is a counselor. When I’m listening to it, it calms me down and I learned how to not just throw [my feelings] out there but think about everything.”

What Cautivar admires about Kang’s style as a musician is how she plays aggressively and isn’t afraid to take control of the instrument. Cautivar also said he believes through her orchestra achievements, she can take this as far as she wants it and be successful in it.

“I am not sure of my career path at the moment,” Kang said. “But I feel like music calls and I feel like I was born to be involved with music and art.”