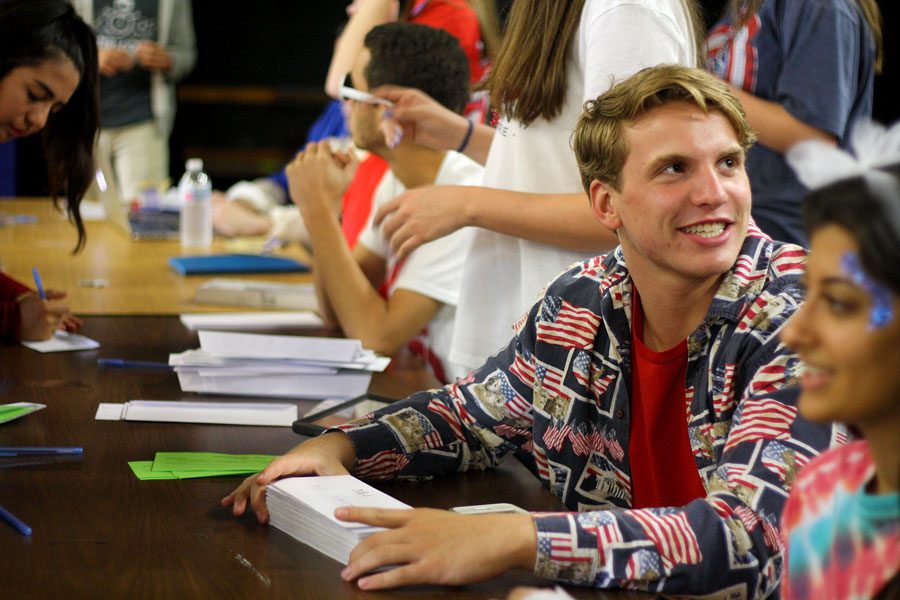 Finding senior Chris Bedell can be difficult. Before school, he is likely at a club meeting leading worship or an early morning football practice running plays. After school, he might be at tutorials getting help with homework or volunteering with NHS. That is, if he’s not helping Student Council paint signs for the hallways.

Chris enjoys being involved in organizations such as NHS, SNHS, FCA, Student Council, I Am Second, Future Professionals Club, and Ruckus and Rowdy. He does this alongside taking AP classes, playing on the football and basketball teams and being senior class vice president. Recently, he was named September’s student of the month.

“It’s not very easy,” Chris said. “I don’t necessarily have all the free time in the world. I don’t get to do everything that I want to do on the weekends. I don’t watch a whole lot of Netflix or anything like that. I care enough about all those things that I make time to do [them.]”

Chris didn’t plan on running for senior class office. In fact, it was a backup in case he didn’t win the senior representative position in Student Council. Although Chris did not get the position he originally wanted, he became social media chair, prompting him to run for senior office and winning the vice president position.

“[Running for VP] didn’t really cross my mind until [people] started talking about it at the end of last year,” Chris said. “I thought it’d be a good idea just because I like to know what’s going on in the school. It makes high school more fun that way.”

Being involved was not always at the top of Chris’ list, but having supportive parents and a sister who had been involved during her high school years helped push him toward it.

“Ever since I’ve started high school, I’ve tried to be involved in a lot of things,” Chris said. “Sometimes I feel obligated to do stuff, but for the most part it’s really because I like being in those organizations. Most of it is because I just enjoy the opportunities that I get to do things, to meet people, to be with people through those organizations.”

Chris’ parents, Dan and Kristen Bedell, although supportive, make it clear to Chris that even though he’s so involved, his priority is his academics. They’re both impressed by his ability to juggle so many activities while maintaining a positive attitude.

“I admire the fact that [Chris] chooses to do all these things,” Dan said. “We always worry that he might spread himself too thin, but if he’s willing to take these things on, he is dedicated to making sure he excels in all of them. Chris doesn’t sleep very much; he stays up very late, almost every night to finish homework and he gets up very early almost every morning for football practice, but it’s not OK with him to do things poorly or halfway.”

Chris is a part of the football team and had been a part of the basketball team as well until he tore his ACL and meniscus three weeks ago during football practice. The injury might prevent him from playing basketball this year. After being a high school athlete for four years, Chris wants to erase a misconception about athletes when it comes to school.

“[I’d like to erase that] athletes care more about their sport than they do about school and that in Texas, where high school football is a big deal, teachers are going to pass you,” Chris said. “That may be true in other places but that’s definitely not the case here. A lot of the guys that I know, that play football, that play basketball, they actually do really care about their academics, because they know that if they want to go play at the next level, academics are really important.”

According to one of Chris’ best friends, senior Michael Betrus, Chris’ leadership skills are off the charts, and when Chris speaks, you feel like you should be listening.

“He’s passionate about everything,” Betrus said. “Chris is never working at something halfheartedly; he’s all in. He pours all of his effort into his spiritual life, football, basketball, school and his relationships. You’ll even catch him working hard in calculus, which I know isn’t his favorite thing in the world. I admire his perseverance and diligence.”

Chris’ reasoning behind being involved in multiple things is a philosophy he lives by.

“‘Keep as many doors open as possible,’” Chris said. “It’s hard to keep a lot of doors open. It makes the decision harder, but I’ve put myself in a better situation if I have ten options that are pretty good, than one or two that are okay.”

Although Chris was planning on playing football for an Ivy League university, the offer might not be on the table due to his injury. His next choice is Texas A&M University, where he wants to major in biomedical science and eventually become either an orthopedic surgeon or a neuroscientist.

“My hopes for his future are that he’s able to pick something that he’s passionate about and excel in that, because Chris does so many things and does most of them well, ” Dan said.

According to Chris, being involved has made him more mature by teaching him how to manage time and responsibilities. Also, he’s learned that participating in dress up days and being a part of clubs and organizations is the way to get the most out of high school, because they allow him to create memories.

“When I’m 60-years-old and looking back, I’m not going to think about all the times that I sat on my couch and watched ‘The Office’ on Netflix,” Chris said. “I’m going to think about the things that I did that were fun and meant something. That’s what these clubs and organizations have given me, they’ve given me a way to do that.”