Junior creates her own jewelry company 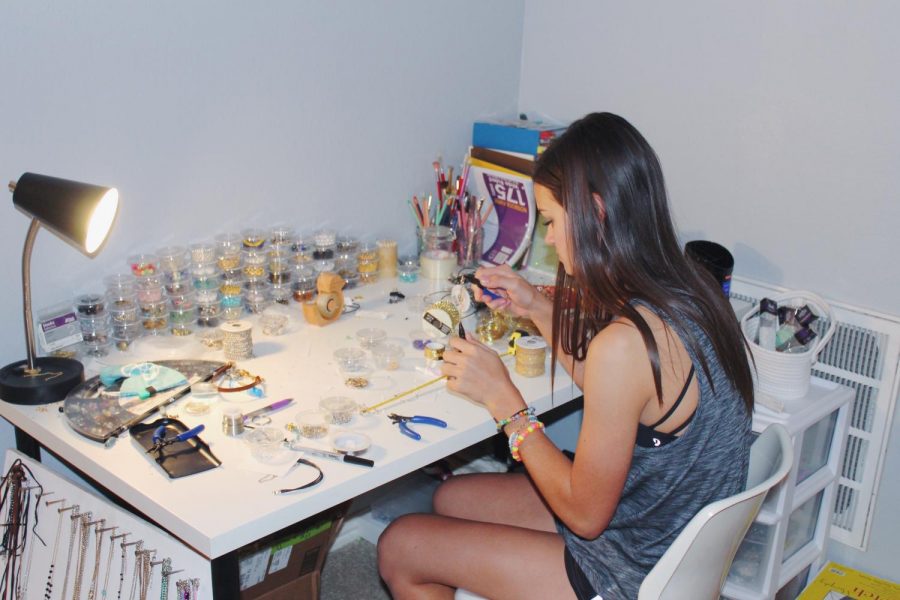 Junior Murphy Carlson works at her desk, creating jewelry for her customers. This is Carlson's first business and she runs it herself while being in school and extracurricular activities.

Along with balancing academics and extracurricular activities, junior Murphy Carlson has managed to create her own online jewelry business. Carlson sells a wide variety of styles of handmade necklaces and bracelets internationally.

Carlson first began creating jewelry in April, selling her jewelry mostly to friends. During this time, she decided to work her first job at a restaurant. Not enjoying her job, Carlson decided she wanted to find out how to independently make money. Carlson decided to sell her collection of jewelry, and launched her jewelry business, Murphy Carlson Jewelry, on July 14.

“My goal in the beginning was to just make a brand that [represents] me,” Carlson said.  I’ve definitely been into fashion my whole life and when I started it, I wanted to create my name into a brand [which in the future, can become] a well-known name. It took a lot of experimenting with, creating the website and figuring how it all works. My dad did help me with the finances and linking bank accounts, but I did almost all of it on my own.”

During the summer, Carlson experimented with creating websites and ended up creating her own. Carlson posted her jewelry on there and began to expand the website by adding names to her jewelry and creating different sections for necklaces and bracelets.

“I was with my friends when I was designing,” Carlson said. “I was trying to post the new items to the website, [but] I didn’t know what to name them. So I decided to name them after my friends, which is good because it makes them have a connection to the website.”

Before creating her business, Carlson was not interested in jewelry and said she hardly wore it. But what inspired her into creating the jewelry was her interest in arts and crafts.

“I was at Hobby Lobby and saw all the supplies at the store,” Carlson said. “Hobby Lobby has basic supplies, so I just started messing around. Soon, I learned how to use more advanced supplies to create better jewelry. I could be walking out of a class and see someone wearing a necklace I thought would be cute, and change it a certain way. Whenever I have a pad of paper, I’ll make a sketch quickly [and] try to design it when I get home.”

While working on creating her jewelry line, Carlson had a job at a high-end jewelry company, Catherine Page Jewelry, where she learned new ways to create jewelry and new skills to transfer over to her designs.

“Some necklaces are definitely harder to make than others,” Carlson said. “It takes a lot of practice, and at my job [at Catherine Page] taught me skills and I made them jewelry.”

As Carlson acquired more skills and expanded her business, she created a process for creating and selling the jewelry by coming out with arrivals every other Saturday and making duplicates of each piece of jewelry. While her business is a priority, she still manages her time for homework and hanging out with friends and family.

“It can be hard managing school, business and being in softball,” Carlson said. “The biggest thing is creating priorities. School is a priority, but also I can’t just have 10 orders and wait three days to ship them out just because I have homework. I sometimes have to put [my business] first because my customers are depending on me. My friends and family are proud of me for doing my own thing, but they can get a little frustrated with me because I can’t hang out when I’m working.”

Despite Carlson having to put her business in front of her family and friends at times, junior Sydney Demski said she is proud of what her friend has accomplished.

“Murphy having her own jewelry business is awesome,” Demski said. “It’s so exciting to see her do all these big things, and I love it because now I have an unlimited supply of necklaces. She’s just so talented. I think she’s going to achieve a lot and grow up to be her own boss.”

Along with Demski, Carlson’s father, Arne Carlson, said he sees the business as a great opportunity for Carlson.

“Murphy is going to learn responsibility and accountability,” Mr. Carlson said. “She’s going to learn how to manage money and design websites. All of these qualities will help her in preparing for college and life.”

Despite her initial concerns about the business, Carlson has been able to grow internationally through many advertisements.

“The company is doing so much better than I thought it would,” Carlson said. “ Eventually, I would like to get in stores in the future and my top goal is to have a customer to product relationship rather than an online relationship. In college, maybe I’ll take some fashion classes, but I would rather focus on business and finance, like investing in and starting companies. This is my first business, but in the future I want to be an entrepreneur with investments and more businesses.”