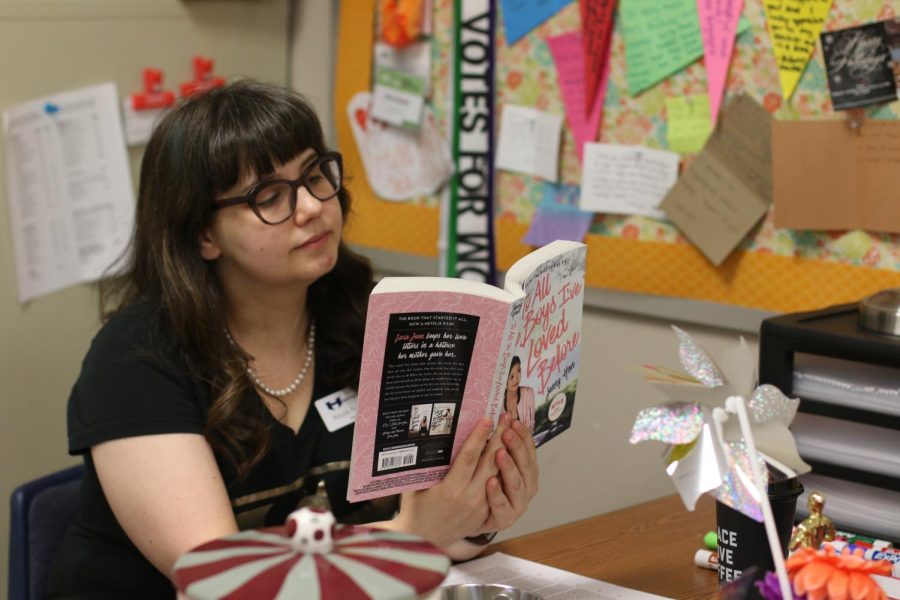 English teacher Nicole Perkins reads at her desk before school hours. Despite living a self-appointed ‘crazy, but in a sad way’ life, Perkins consistently has a smile on her face and a witty remark on her tongue during her class periods. “At the end of the day, we’re all learning, and sometimes that’s all you can ask for,” Perkins said.

Teacher Tea is a new series that, in an attempt to humanize teachers, allows them to share personal stories about their life, their past and other moments that shaped them into the person and teacher they are today. Every few weeks, The Hawk Eye will feature a new teacher.

The American Dream typically features a perfect family: a loving mother and providing father who live happily ever after with their children. However, for most people, this dream is simply not a reality. AP English 3 teacher Nicole Perkins is one who grew up with a particularly unique version of the typical American family.

In her childhood home, Perkins lived with her mother, father, and another man whose role in the family she never really understood. He even came with them when they moved from New York to Virginia.

“I normally didn’t think anything of it,” Perkins said. “I always thought, ‘Alright, there’s just an extra person in our house,’ but then he would spend more time with my mom, so I thought that was weird, because my dad was still living in the house, too.”

Eleven years later, she found divorce papers between this man and her mother.

“My mom, closer to her death, revealed that the reason behind it all was that we needed money, and this man was willing to pay her to marry him [because he was a foreigner and needed a way to stay in the country],” Perkins said. “But apparently my mom and this guy were married at the time [while] my dad was living with us, too.”

Perkins said she believes this man was a friend of her father’s, but she refuses to contact the man with questions about the situation. Her sister has reached out to aunts on her mom’s side to get some answers.

“[My aunts] said that some of my dad’s other friends had also approached them with a similar offer of paying them to get married and they turned it down,” Perkins said. “My mom and her sisters’ relationships weren’t very good, though, so we don’t know if they were telling the truth about it.”

As a child, Perkins thought everyone had similar living arrangements to hers; it wasn’t until later in her life she realized how strange it was that this man, who she no longer knows, was a part of her life for most of her formative years.

“I’m still trying to put all the pieces together,” Perkins said. “It was all really bizarre and it’s one of those things where I’ll never really get an answer because the people that I could ask about it aren’t around anymore.”