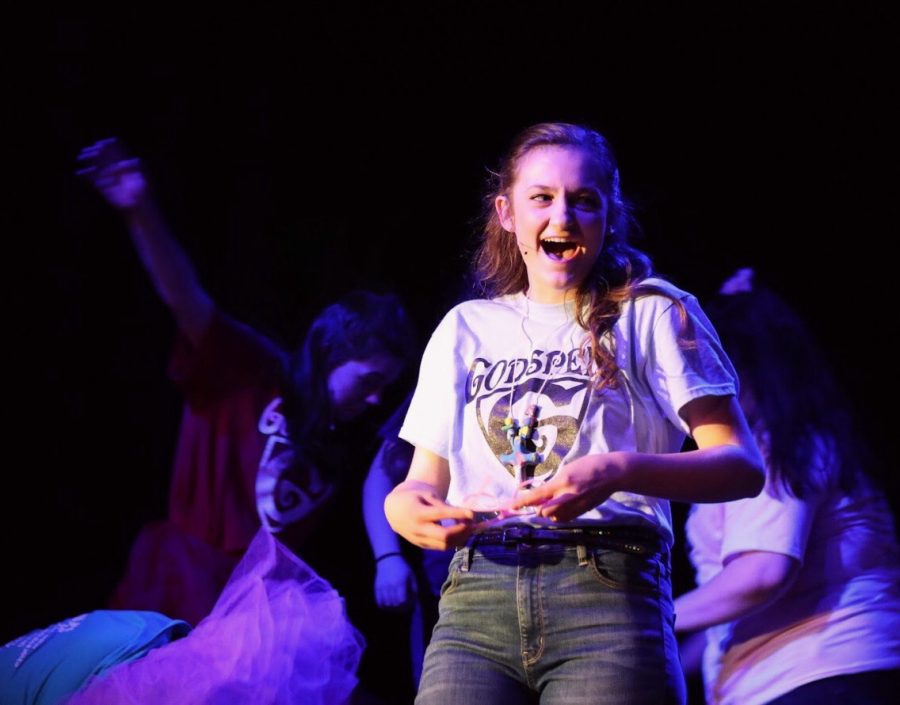 Senior Addie Thrower performs in the play Godspell in the role Peggy and Joanne.

It began with a simple advertisement listed in the Dallas Observatory. Listed under the entertainment section was a children’s production of “The Sound of Music.” After going to the theater to see the musical with her sister and father, then first-grader, Addie Thrower was determined to make the spotlight hers.

After rehearsing and performing countless shows at Plano Children’s Theatre throughout the years, Addie, now a senior, realized that both her talent and appreciation for musical theater increased exponentially.

“I love getting to share stories with people on stage,” Addie said. “Our goal in musical theater is to have the audience feel changed after a show is done. It’s to inspire people to feel a certain way or have a different view on something. I love just knowing that people in the audience are enjoying something.”

With an uncertain and competitive future awaiting, Addie’s mother, Nicci Thrower, has expressed a few concerns expressed for her daughter. Despite her worries, Nicci fully supports her daughter and has confidence in her abilities.

“I absolutely want her to pursue what makes her happy,” Nicci said. “Of course, there’s that little bit of concern about whether [musical theater] is something that’ll be lucrative, but when Addie puts her mind to something, she tends to get it done.”

Addie’s time performing in a theater after school has proved beneficial in teaching her valuable lessons that she believes will help prepare her for her future.

“In theater, you don’t always get the role that you want, and sometimes I have to keep in mind going into musical theater that it’s never completely fair,” Addie said.

With the high stress and competition that comes with auditions, Addie consistently has to keep a level-head and stay true to herself in order to preserve her confidence in her abilities.

For Addie, the transition from doing musical theater just for fun, to dreaming of starring on broadway came quickly, influencing her to partake in numerous voice and dance classes in order to better her talents.

“I don’t know if the word ‘broadway’ came up right away, but as soon as she learned that term, she wanted to do it,” Nicci said. “Once she started musical theater [after a short break] back in sixth grade, it’s been full force ever since.”

With the countless memories and deep friendships Addie has made, she said theater has become a second home to her and has largely shaped her family’s identity.

“If you’re looking for a place to fit in, definitely join theater,” Addie said. “Theater is a place for everyone. Even if you’re shy or think ‘I’m only athletic, I can’t do acting.’ No. In theater, we don’t care. We just love everyone to join.”