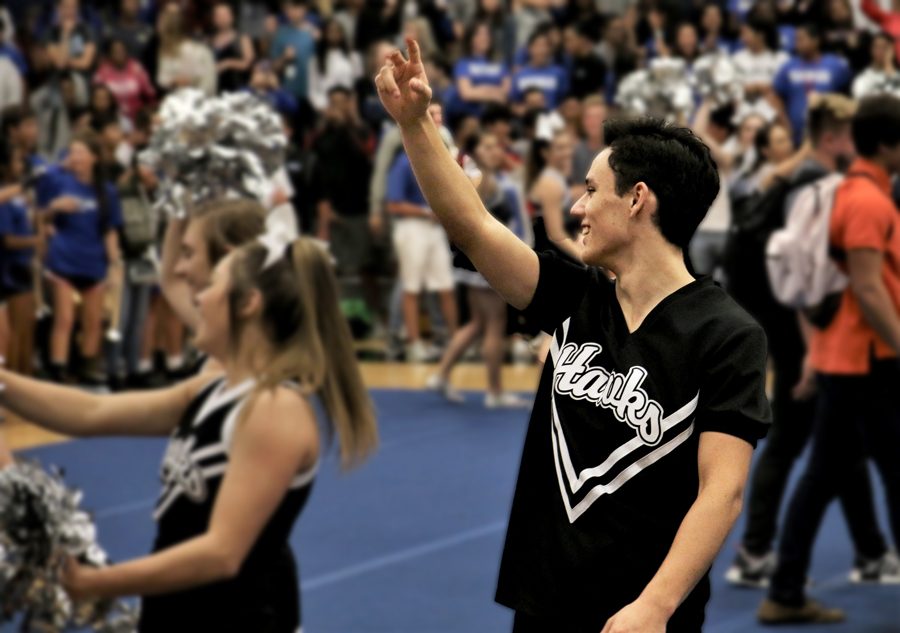 Sophomore Nathan Drew cheers at the pep rally held on October 5th. The cheerleading team attends many school events to bring spirit and excitement to football games and more. “I cheer at all the JV games: football, volleyball, basketball, all of those,” he said. “We do pep rallies too, and if the school has a fundraiser event, we’re there.”

Back handsprings, cartwheels, walkovers: tumbling is a physically and mentally challenging sport. It can take years to learn each movement and even more to link them together. Sophomore Nathan Drew has been honing this skill since he was in third grade, and has now brought his talents to the Hebron cheer program.

Drew, although he’s been tumbling for years, has never been on a cheer team for school. He transferred districts from Plano ISD last year, but missed tryouts. During his freshman year, English teacher and cheer head coach Courtney Kennedy encouraged him to join the squad.

“[Nathan] knew that I was a cheer coach, so he started talking to me about it because he was involved with cheer before and wanted more information about doing cheer at school,” Kennedy said. “That kind of got it rolling, and then he tried out like everybody else in March.”

Many high schools consider having boys on their cheer squads as normal, but Hebron hasn’t seen a male cheerleader since 2005. Ever since a group of senior guys graduated from the team that year, no one has taken their place until Drew.

“Nobody here is used to seeing a guy go out and run with the cheerleaders or work out with them, but the more time I spend on the team, the easier it gets,” Drew said. “Because it’s uncommon here, I’ve just had to look around at other high schools around me to see that it is normal – Lewisville High School even has more guys on their team than girls.”

Drew learned to tumble at East Texas Twisters in Canton, Texas, then took lessons at Cheer Athletics after sixth grade. He spends time at home practicing as well. Though he’s well-versed in tumbling and provides multiple other advantages to the squad, Drew had to learn other cheer skills to fully participate on the school team.

“It’s been a learning curve for him because it’s not just tumbling, there’s all the other components too,” Kennedy said. “He’s definitely caught on very quickly – we’ve had to help him with some stunts and partner stunting, but he’s been working on that and his motions from the beginning, and those things are easy to tweak and help. He has a sense of leadership, he’s strong, and he’s good at tumbling. I’ve really enjoyed having him on the team for sure: he’s a super nice kid, and he’s brought an air of excitement and something new to the squad.”

Drew’s biggest role model and motivator is his father; he inspired Drew to take up tumbling when he went back to school and cheered for the University of Texas.

“I went to the basketball games he would cheer at, and it was so fun to see him tumble – it was always really cool to me,” Drew said. “I figured if I got into it my high school years, I could do it through college just like he did. Hopefully, whatever college I choose to go to, I can go on some sort of scholarship for cheer.”

After being out for a year and a half due to an injury, Drew nearly quit cheer, but his father encouraged him to continue tumbling.

“I broke my hand my eighth grade year,” Drew said. “It was a really hard time for me because this sport had been such a huge part of my life for such a long time, and I don’t think there was ever a time since the third grade that I spent that long without tumbling. It was very hard for me to keep going afterwards because I hadn’t done it for so long.”

Drew doesn’t have much time to be a part of outside cheer organizations because of his class load, but he’s on Hebron’s competitive squad as well as JV, and he’s excited for competition season.

“[Getting a guy on the team] was big because we had to change where we competed: instead of being an all-girl team at a 6A school, we’re a coed team now,” Drew said. “It’s a different dynamic for everybody and I’m really excited to see where that goes with the season.”

Though Hebron’s male to female cheerleader ratio is slim, it doesn’t have to be that way. Drew said the girls have been very kind to him, and he hopes to possibly inspire a new wave of cheer boys.

“Everybody in the Hebron cheer group has been some of the most supportive people in my life,” Drew said. “Coming in here, it’s like a huge family and it’s super cool to hang out with all of them. It’s a really fun sport, and it’s not just all girls. People always thought our cheer squad was specifically for girls, but if anybody next year wants to try out [who is] a dude, they’re welcome to.”