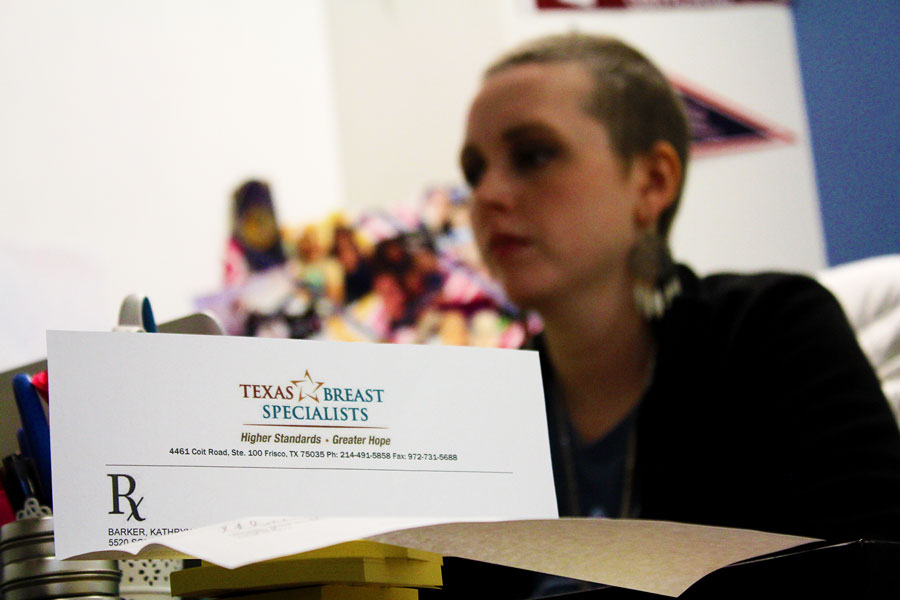 English teacher Kathryn Barker works at her desk as her return to work letter is displayed in front of her. (Photo by Mrunmayi Sathaye)

English teacher Kathryn Barker works at her desk as her return to work letter is displayed in front of her.

A path to recovery

It was sometime in February when she felt a lump in her chest.

It was a few more weeks after that when she finally made a doctor’s appointment to check it out.

She was at school teaching her fourth period English class when she got the call disclosing the results of the several tests she had gone through – a call that would change her forever.

The tumor was two centimeters and had not spread, classifying her cancer as a stage two. Triple negative breast cancer, which is not caused by hormones or protein, is considered one of the more aggressive kinds and tends to happen to younger women.

“[Before I got the results of the test,] I felt like it was cancer, but I also felt like it was one of those things where I was thinking of the worst case scenario,” Barker said. “Everyone kept telling me that it was probably nothing, that I was so young, and that there was no family history. For the most part, I felt pretty confident, but in the back of my mind, I felt like there was something really wrong.”

When Barker got the results of the test, her doctor gave her recommendations of top surgeons to call next. Barker made an appointment and the doctor disclosed all the potential side effects which she said was hard to hear all at once. The chemotherapy began shortly after on April 25 and Barker went through a total of 16 rounds.

“The tumor was growing very fast,” Barker said. “They wanted to get [to the cancer cells] as fast as they could [because it was so aggressive], so we did chemo before surgery. The idea is that you want to try to kill any cancer cells that could be anywhere on your body [before doing the actual surgery].”

Barker felt the effects cancer and chemotherapy had on her body: she was more tired, she lost her hair and she felt nauseous.

“[The idea of my hair falling out] was pretty hard on me since I’ve always had long hair, so I cut it short just to get used to it,” Barker said. “When it started falling out, I decided to shave [my head] before my hair started falling out in big clumps. It wasn’t until the very end when my eyebrows and eyelashes [fell out] and that was very frustrating because you look very different without those things. There were a bunch of other side effects like nausea and acid reflux and weird things that I didn’t know [were] going to happen.”

“[After I got the call,] everyone rallied around me while I was dealing with it,” Barker said. “The couple of teachers I was close with sat with me while I was crying. [While I was going] through chemo, I was exhausted [but I was] still working; my students were great. They would help me out a lot and would do anything for me that I needed done so I wouldn’t have to get up or overdo it.”

In October, cheer coach Courtney Kennedy organized a pep rally in support of Barker, and through the “Big Blue Goes Pink” shirt sales, the school raised about $2,080 in funds.

“In the past we did the same kind of thing for [the head custodian] at Hebron, and I wanted to be able to help Kathryn in the same way,” Kennedy said. “If we could help her out by raising money from our “Big Blue Goes Pink” shirt sales, then we could give it to her. In the past we have donated it to [the] Susan G. Komen [foundation], and I felt that [donating to Barker] was a more personal use of our funds so it could benefit a teacher that people knew.”

On Oct. 22, Barker received pathology reports deeming her as cancer free. Barker’s outlook on life has changed through this condition. She said she has become more appreciative of the life she has been given.

“Anybody, when you’re this young, would never think they would get cancer,” Barker said. “I had my birthday in August and I turned 29 and I think it was one of the first times I realized how much cancer had affected me because I got really emotional about my birthday. I wasn’t expecting to, but all of a sudden I started crying talking about my birthday with my friends. It’s little things like that [which made me realize] not to take things for granted.”