Speaking it into existence

Sophomore's optimistic outlook allows her to overcome her past 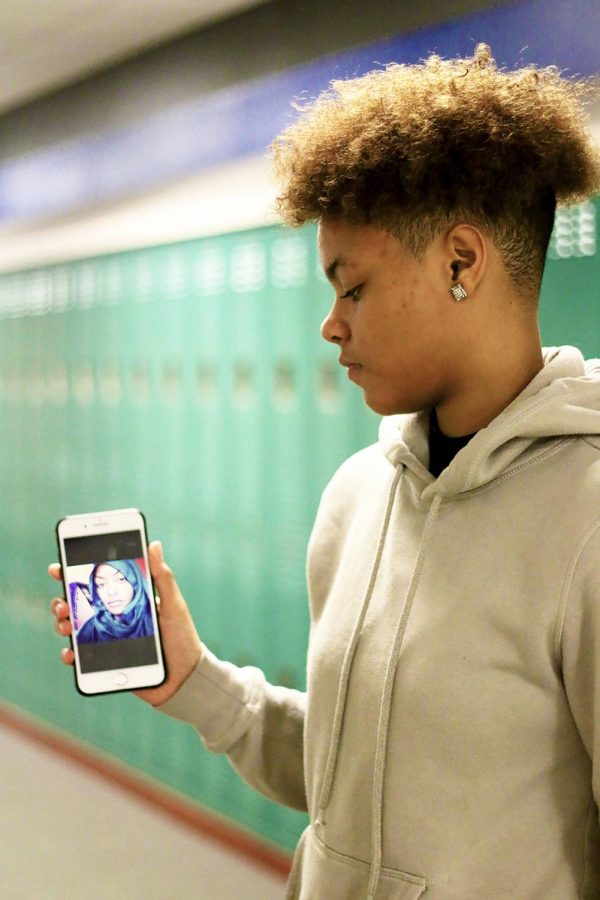 Sophomore Rachaelle January poses with a picture of her mom. Despite the difficulties her family has faced, Rachaelle said she is determined to bring them back together.

In a cozy white town home in Portland, Ore., Rachaelle January’s mom is preparing for a special day: Rachaelle’s 7th birthday. She clears the room of furniture, mixes the perfect combination of soap and water, and pours the slippery mixture on the hardwood floors — turning the house into a “slip-and-slide.”

The birthday girl, enjoying her day with her siblings, mom and close relatives, slides into the wall and bursts into laughter. Coming to her “rescue,” her siblings find themselves in the same position. The rest of the day was filled with loud music, laughter and the family’s favorite junk food.

Rachaelle and her siblings still look back on that day with an indescribable fondness: one unmarked by the struggles in their home.

Less than a year later, Rachaelle waits inside a courtroom trying to make sense of the situation.

Her older brother, Scarsponee Johnson and older sister, Naomi Johnson were going with their dad to Texas, and her younger brother, Giovonni Diaz, was going with his dad to Las Vegas. Rachaelle waited and learned she was to stay with her aunt and uncle in Portland.

They never returned to their family’s white house, not even to gather their belongings.

It was years later, in 2018, that Rachaelle finally discovered the reason behind her family’s separation — her mom’s drug addiction.

“Someone told me and that broke me really bad,” Rachaelle said. “Last year I was really mad at my mom and did not want to associate with her. Then my auntie sat down with me and [said]  ‘You can’t do that, because your mom still loves you. Why would she do all that stuff for you? Why would she call you all the time? Why does she call you more than your dad? She still cares.’ It made me think that somewhere in her mind, even though she’s going through the drugs and all that type of stuff, she still does care.”

Rachaelle stayed with her aunt’s family for roughly eight years, and although her aunt treated her like her own daughter, Rachaelle said she felt like a foster kid.

“I didn’t feel like I was welcome there,” Rachaelle said. “I wanted to feel like that was my family, but I just didn’t get that connection.”

At her aunt’s house, Rachaelle was surrounded by her aunt, uncle and their children. Along with the full house came arguing and negativity that pushed Rachaelle to want to leave.

“If I don’t like something, I’m going to try to change that [in] any way I can,” Rachaelle said. “And so that’s why I left.”

After five attempts of running away from her aunt’s house, Rachaelle was finally given legal custody under her 21-year-old brother. Her aunt bought the plane ticket for Rachaelle to go to Texas.

“The process of getting custody of Rachaelle [began with] a question to myself [asking] if I was ready,” Scarsponee said. “Being 21, I’m still a kid myself. I have a lot of learning [to do], but I didn’t hesitate when I had the opportunity. Having custody of her now is just a day-by-day process. We both help each other in ways to better ourselves for the future and what life has planned for us.”

With the move to Texas in January, Rachaelle said it has been difficult to get the support she had

in Portland, where most of her family still is.

“It was kind of a mistake and also not a mistake leaving,” Rachaelle sad. “When I was there, there was good things like my cousin — he was like my brother, we did everything together — I lost him and all the people around me that lived there. All my family lives there and [so when I came] here, I only know my brother and my sister.”

Though Rachaelle has not been able to visit her mother after the separation, she gets to catch up with her over the phone. Rachaelle’s main goal is to help her mom recover from her drug addiction.

“Those are honestly the best times,” Rachaelle said. “When I talk to my mom, my whole day is better. I don’t care [what] nobody says, it’s just the way that me and my mom have a connection. She’s my best friend. The times that we don’t talk, it kind of like makes my day worse. If I can’t talk with my mom and she won’t answer her phone, I get worried about her and be like, ‘What’s wrong?’ So I don’t like feeling that way, but the times that we do talk, it’s good.”

Rachaelle’s sister Naomi said that even though the separation put some limits to their relationship, she knows Rachaelle will support her when she needs her and she will do the same for Rachaelle.

“Rachaelle [has] grown a lot since she was younger,” Naomi said. “She is such an intelligent, bright young lady. She [has] been through a lot of stuff to be only 15 and still [be a] bright, goofy and outgoing person. It’s a beautiful thing. I know my sister still [has] a lot to learn in life to get where she needs to be, but I have the most faith and hope for Rachaelle. She learned to stand her ground, love herself, [and] love others no matter what they do to [her]. She’s such a big help to everyone else she comes across.”

Despite their tough history, Rachaelle and her siblings do not allow their past situation to ruin their future and continue to keep an optimistic outlook on life.

“We are strong and I’ve never met any other kids stronger in my life,” Naomi said. “We stick together no matter what. Nothing can bring us down because we are one strong empire. Rachaelle [is] beautiful and my backbone, and without [her] there would be no me. And for my brothers, we will always have unconditional love for each other.”

Scarsponee, the oldest of the four siblings, was 13 when the separation occurred. He said he often talks to his siblings and hopes they never give up.

“The separation impacted me hard,” Scarsponsee said. “But I knew [that] being the oldest [meant] I had to break the chain reaction and set stones for my family. I love my mother to death. I would never have a different viewpoint on my mother, she is the queen and she made me who I am today. I never let my past reflect my future, so what happened then is only bettering me for now and my future.”

Currently, Scarsponee and Rachaelle live with Scarsponee’s father’s side of the family as a temporary living arrangement. He plans to have everything he and Rachaelle need to live on their own before the next school year.

“Rachealle has taught me that anything is possible, [no] matter what age,” Scarsponee said.
“Everything happens for a reason. [Rachealle didn’t change since I last saw her], just got a little more older and interesting. Texas has a lot to show that she hasn’t seen yet. I was once in her shoes.”

Transitioning from a busy house back at her aunt’s, to her brother’s, Rachaelle said she missed having her cousins around her.

“It was relieving, but also devastating because I was leaving so much behind,” Rachaelle said. “It was a big step to take, but I’m glad I took it. It was like getting a whole bunch of weight off my back because I was starting over [and] getting a fresh start. [Me and my brother,] we’re still trying to get back into the sister-brother bond, so it was kind of hard. I was surrounded by a bunch of siblings at the old house, and now it’s [has come] to just being on my phone.”

Rachaelle said her brother is trying to get a better job — one that will support them both.

“I can see it in his eyes; he’s stressed out,” Rachaelle said. “He’s never taken care of nobody. He’s always been independent like me, so it’s kind of hard for him. I just try to keep it soft and not really annoy him and just stay to myself.”

Scarsponee is currently a party promoter and wants to to secure a better life for his family. He plans to get a good sized house start a business in the future.

“The thought of my sister not being with her mother or father [is sad],” Scarsponsee said. “So in my eyes, I’m the next in line.”

After moving to Carrollton, Rachaelle noticed a change in her academic motivation — she said that she did better in school back in Oregon.

“I don’t have motivation to do better [here],” Rachaelle said. “So I have to motivate myself and it’s kind of hard. That’s what I was lacking in Portland too, but the reason I got good grades was because [my aunt and uncle] were strict. They would take my phone if I had one D or F. That’s understandable, but my brother just keeps saying “you can do it, you can do it.” And he doesn’t look at my grades, so I have to just motivate myself to do it.”

Through self-motivation, Rachaelle wants to achieve another goal: bring her family back together again. For a short duration following the initial separation, Rachaelle and her siblings were living together at their aunt’s house; Rachaelle said she didn’t like the feeling of them leaving.

“Next thing you know, people started leaving,” Rachaelle said. “Now everybody is split up again. I don’t know why it keeps happening. It was really hard on me because of how emotional I am. I didn’t have my siblings. I didn’t have my mom.”

With three of the four siblings back together in the same area after five years, Naomi said she believes her family will be reunited again.

“Me and [Rachaelle] have the same goal and I do believe it will happen,” Naomi said. “One thing about my mom’s kids [is] if we want something, we will do everything in our power to make it happen until it happens.”

Like her brother, Rachaelle does not want to let her past define her future. She said she is going to keep the mindset that she will achieve her goals.

“God does everything for a reason — that’s the way I look at it,” Rachaelle said. “I always think about how [life would be like] if I had my parents. I would like that, but at times, I feel like [the past has made] me a stronger person. If I keep believing the way I [do], my mom’s going to get better, my siblings are going to be back together and I’ll reach my goals.” 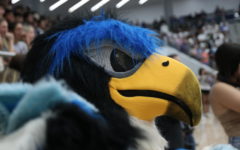 Students behind the mask 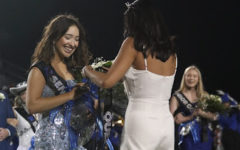 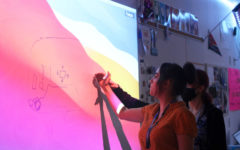 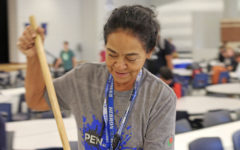 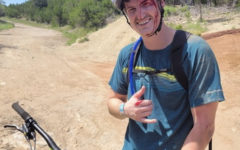