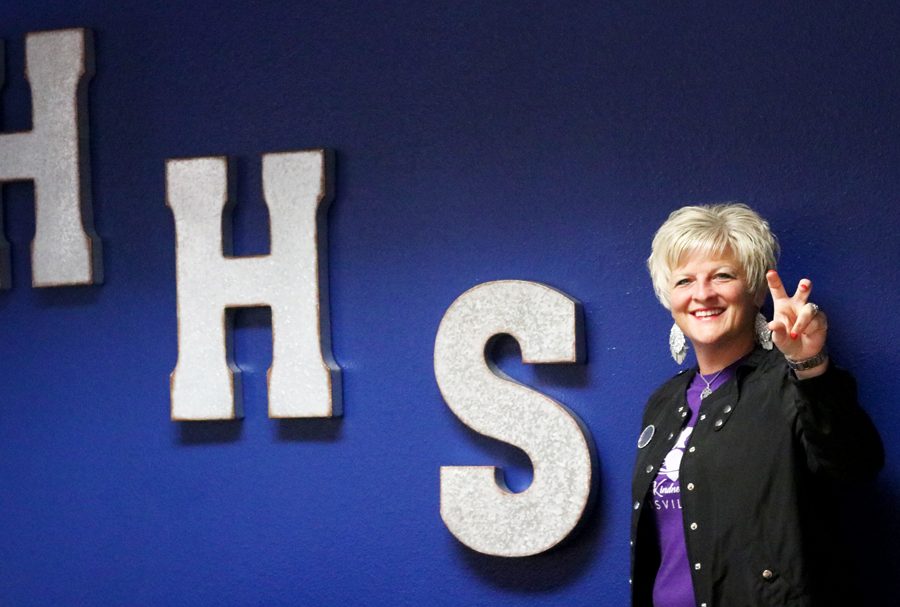 Principal Amy Boughton poses with the HHS wall in her office. Boughton moved into her office the weekend after her appointment on June 20.

Finally, it’s the first day of school. Ever since she stepped into the school, life has been non-stop for new principal Amy Boughton.

Previously the principal at Griffin Middle School, Boughton was appointed as Hebron’s principal on June 20, after former principal Scot Finch’s retirement. Becoming a high school principal, especially at Hebron because of its diversity and drive, is a dream come true for Boughton.

“There’s an undertone of competitiveness that you don’t see everywhere where the students and the faculty and administration all want [Hebron] to be the best at everything it can possibly be the best at,” Boughton said. “That is why Hebron was the high school I was so drawn to. The only one, if I could pick, that I would be the principal of.”

Boughton aims to work on building relationships with students and staff.

“I want the students I end up working with to say that I cared about them, I listened to their input and I was at as many things as I could possibly be at in support,” Boughton said. “Whether it’s academic or fine arts or athletics, you know, I was just all in, and they could count on me to listen to them or be there.”

Boughton became interested in an education career when she was in seventh grade. The experience she had interacting with and watching teachers, including LISD superintendent Kevin Rogers, who was a science teacher at the time, piqued her interest in the field.

In high school, Boughton was heavily involved in athletics and extracurriculars such as Student Council. However, her social and athletic confidence did not translate to the classroom, and she worried about being successful in college. As a principal, Boughton regards her high school academic experience as a way to understand the situations of different students.

Boughton did not intend on pursuing an administrative position until around four years into her teaching and l coaching career, which began at Newman Smith High School.

“Every year, I tried to take on more things as I was teaching and coaching there,” Boughton said. “I finished my masters degree, and I knew I wanted to be a principal at a high school.”

“When you’re on a campus for nine years, you get the opportunity to work in every single duty there is,” Boughton said. “I was able to see families go through and work with so many different student populations.”

Moving from Griffin to Hebron with Boughton is her secretary, Pamela Humphries. This is their fourth year working together.

“We have a good working relationship, we really do,” Humphries said. “Some people laugh and they say we sound like an old married couple sometimes because you know, you work very closely with the principal.”

Humphries said Boughton has grown a great deal in her three years as a principal at Griffin.

“She’s just really good at mentoring and developing and helping schools grow to their potential,” Humphries said. “She walked in and saw what the needs were and she addressed them head on, and I think that’s where I’ve seen her grow from the three years in Griffin to now.”

Senior class president Lexi Pepper said while there hasn’t been any big changes in student life, she’s looking forward to having Boughton as principal.

“She’s really big on working for us and not just because it’s her job,” Pepper said. “And so she’ll be doing a lot to make our student life a little bit better. I just think she’ll be a great addition to Hebron and really increase energy levels in general. It’ll be really cool to have some liveliness in our administration.”

Boughton said she hopes to carry on Finch’s legacy by maintaining the success of the school.

“The success of the campus embodies [the previous principal’s] legacy, and I hope to be able to live up to that same standard that you guys have always known,” Boughton said.