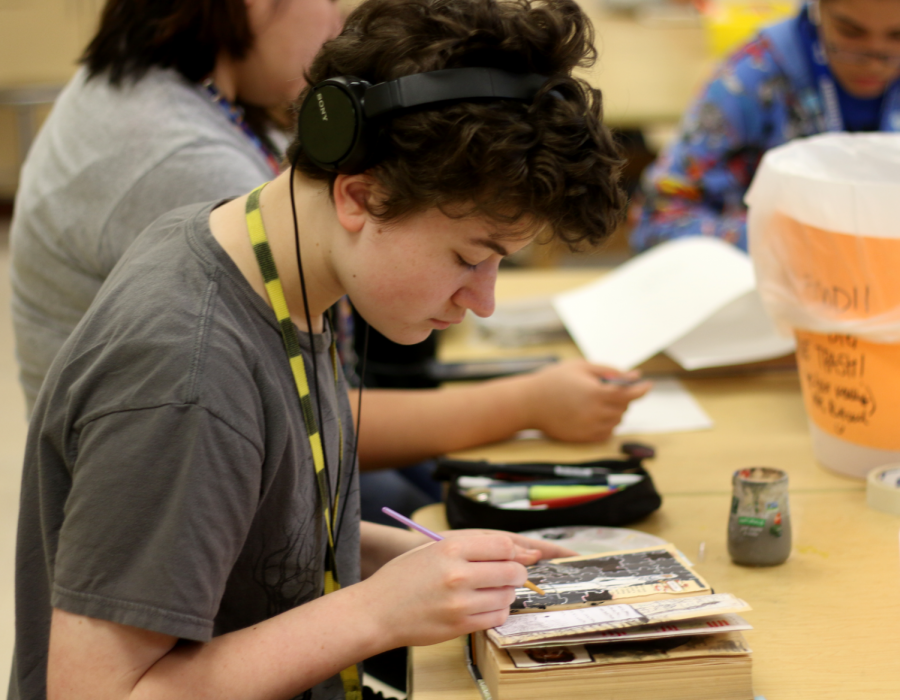 El Champion works on their current “inktober” piece. Inktober is a month long art challenge with different prompts for each day.

People often say that children’s minds are blank canvases waiting to be painted on. In student’s case this is entirely evident. Being surrounded by their father’s colorful comic strips, paint brushes and other various art supplies has left a mark on senior El Champion’s life and convinced them to pursue art.

Champion is currently working on their AP concentration where the artist chooses a central theme and bases 15 works of art around it.

As a child El filled sketchbooks with doodles of anime characters and cartoons. It wasn’t until sixth grade when they started taking art more seriously, leading to countless art competitions and awards, from events such as the state visual art scholastic event.

“[My art style is] messy, blotchy, and sketchy,” El said. “If have an idea in my head, usually I’ll just pick up a pencil and start drawing, but If I have a piece in my head, I’ll start painting.”

From a young age El was surrounded by art, thanks to their dad who is an art teacher as well as an amateur graphic novel artist. El’s father has a big role in their artistic development and one of their biggest supporters.

“I always downplay my influence,” El’s father Eric Champion said. “Sure, I’m an art teacher at Lewisville High School. But when El was in 8th grade, I realized that their talent surpassed my own. It was really fun to watch them develop. I tried not to nitpick their drawings, but ask big questions for them to work through the development into the next level. I think my biggest influence was our home life – we talk about art and we have lots of art supplies. Someone is always making things. Ironically, I think El helped push that artsy environment more than me.”

AP art teacher Jennifer Russell has been teaching Champion for three years. She has seen El’s art and personality develop over the years.

“El was always just awesome, but technically [their art] is just a little more refined and they’ve learned things along the way,” Russell said. “As a person, they are more sure of themselves and their point of view artistically has evolved, which is great.”

As someone who discovered their gender from a relatively young age, identity has made a large impact on El’s life. They identify as non-binary, which is a gender that is not specifically feminine or masculine.

“Non-binary is kinda a newer thing; it’s called a new concept, but it used to exist but nobody knew what it was,” El said. “It’s a more public concept now. It’s kind of weird, because as a kid I knew something was wrong, but I didn’t do anything about it because I didn’t feel like it. So I just leaned into heavy tomboy vibes, and whenever I learned there were terms and words for these things and ways to get to who you want to be and where you want to be, and I considered ‘maybe i’ll be a trans man.’ But I couldn’t really imagine being a man in the future, but I also can’t imagine being a woman in my future, so I just decided I’ll just be me instead.’”

El hopes their successful high school art career will lead them to art school and an art-based profession in the future. Russell has faith that El will find success within the art profession.

“I intend to go to art school so I can do visual development for movies,” El said.. “So I can be the person who does character, monster designs, outfit designs, vehicle props, backgrounds, any of that because it sounds like a lot of fun.”