Soaring through the skies

Junior pursues a future in aviation 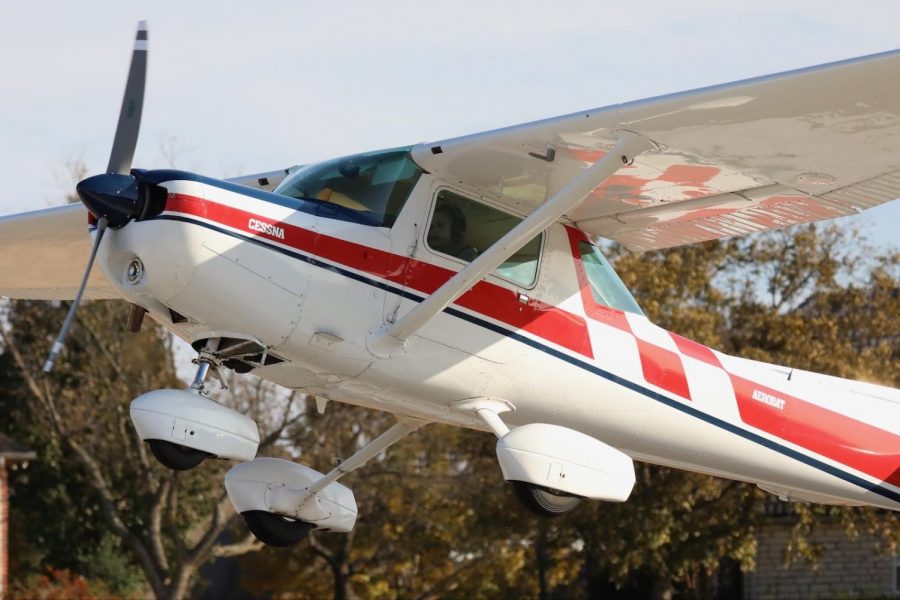 Newman takes off in a Cessna 152 Aerobat plane. Newman’s passion for flying began at a young age and carried into high school. “My whole family flies,” Newman said. “My mom was a flight attendant, my dad was a pilot, my [grandfather] was a pilot and my other grandpa was a pilot.”

The sky is a bright, clear blue as she lifts off. The whirring of the plane’s engine and the feeling of the yoke (the steering wheel of a plane) in her hands sends exhilaration and adrenaline through her veins. As she looks down, houses becoming gradually smaller and the vast expanse of blue sky in front of her grows larger. The sensation of overwhelming freedom washes over her.

Junior Macy Newman has spent what limited free time she has since age 15 learning how to fly planes with her grandfather. In addition, Newman is involved in many school organizations including choir, theater, Student Council, Circle of Friends and National Honor Society. She hopes her extracurricular involvement and flying skills will prepare her for the future.

“I’m not entirely sure what I want to do yet,” Newman said. “But I am considering going into aviation – maybe commercial flying. I’m also considering musical theater or acting.”

Newman has a long family history of work in the aviation industry including her mother, father and grandfathers. She often drives one hour and 40 minutes to Granbury, where her grandfather, who is also her flight instructor, lives in a gated community with its own flight strip.

“I just go over to my papa’s house and he hops in the plane with me and he just teaches me how to fly,” Newman said. “We practice turns or we do stalls. Stalls are really scary to people – that’s when there’s not enough air going over the wings, so the plane just stops and begins falling out of the air. You have to practice it in case it actually happens, so you’re prepared for it and don’t freak out.”

Newman’s grandfather, Grant Metsger, loves getting to spend time with her and seeing her progress in something he has loved to do all of his life. He grew up in aviation and has been flying for many years.

“I soloed an airplane 50 years ago,” Metsger said. “[I] started teaching flying at age 18 and had a flight school for seven years. [I] flew a business airplane for an oil company for eight years, and [I] flew for American Airlines for 26 years.”

There are different kinds of pilot’s licenses, and Newman is working toward getting her private pilot’s license, which allows the pilot to carry passengers in personal planes. A pilot must complete a ground school course (similar to  driver’s education), pass an FAA (Federal Aviation Administration) written test and complete a minimum of 40 hours of flying. The 40 hours must include day and night flying, cross country flying and learning maneuvers. Just like with a driver’s license test, once all requirements are completed, a pilot must take a “check ride” with an FAA examiner to demonstrate their abilities.

Both Newman and her grandfather agree that the most challenging part of learning how to fly is the amount of time it takes to get to Metsger’s house and Newman’2s busy schedule.

“The only challenging thing about teaching Macy to fly has been the distance between Plano and Granbury and the lack of opportunity for her to get down here more often,” Metsger said.

Newman’s love of flying is mutual in her close bond with her grandfather. They both claim flying gives them a sense of freedom hardly experienced elsewhere.

“There is not much I don’t love about flying,” Metsger said. “But the freedom of flight felt when in the air, especially when you are in control of the airplane, is something that cannot be put into words.”

Macy hopes to continue her journey toward obtaining her pilot’s license and possibly  develop her passion for flying into a career one day.

“I just love everything about [flying],” Newman said. “It gives you a sense of freedom. It’s just very freeing to be able to fly and be able to go anywhere you want.”