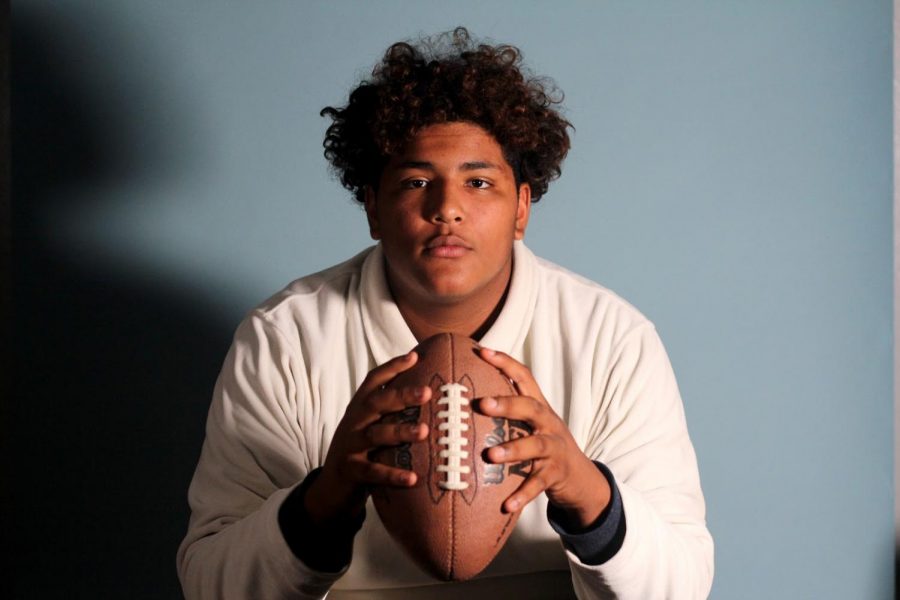 Junior Dakota Newfield holds a football and poses for a photo. He first developed an interest in football during sixth grade. “When I found out that my dad played I really started to develop an interest, especially when I started watching the NFL.” Newfield said.

He stood watching his three siblings as tears streamed down their faces. Feeling helpless, his emotions swirled and made his stomach churn. All he wanted was to understand why everyone was crying. All he wanted to do was see his dad.

Junior Dakota Neufield was six when his dad suddenly passed away from stomach cancer. Despite having to grow up without his father, he keeps his dad — an all-district high school football player who received an offer to play at the University of Tulsa — in mind, and he hopes to pursue the goals that his dad accomplished with football.  Dakota has been playing football since the spring semester of his sophomore year.

Dakota said when his dad passed away, he didn’t know what was happening at the moment. He was so young, he didn’t realize his dad was really gone until he got older. It’s hard for him to see every year go by without his dad there with him.

“I don’t remember crying about my dad because I didn’t know what was really happening,” Dakota said. “So when I finally started to understand what happened, like when his birthday would come around, it brings tears to my eyes because he’s been gone for so long and this would be the fifth year that I don’t get to celebrate my birthday with him.”

Dakota’s mother, Sonseray Neufield, said Dakota went through some hard times when his dad died. He became distant from everyone, but then he was able to find his passion for football.

“He was kind of lost when his dad passed away,” Sonseray said. “He didn’t do much with other kids, and he just kept to himself, but that is how he found an interest in football. He knew that’s what his dad played and how much he enjoyed it, so he wanted to do [it] for not only himself but for his dad as well.”

One of Dakota’s closest friends, Salma Elyoussoufi, said Dakota looks up to his dad mostly because of all the offers his dad got to play football in college. Elyoussoufi has seen the impact of Dakota’s father on his life. She has seen him mature and she said that he has also helped her through some difficult situations.

“His dad was a great man — he basically made Dakota the way he is,” Elyoussoufi said. “He taught Dakota how to be a man and now Dakota’s mindset is to do exactly what his dad taught him. His dad is the figure that he is trying to be.”

Even though Dakota’s dad has passed away, he still plays a big role in his life. Dakota started football once he got to high school because he got in trouble in eighth grade and wasn’t allowed to participate in any extracurricular activities. Despite that, he continues to improve in football and hopes to play in college.

“My father pushes me because even though he has passed away; he still has a very big part of my life,” Dakota said. “He has really inspired me because one of his years playing football in high school, he made it to district.”

Dakota’s mom said Dakota has been her biggest supporter in her own grief. She said he had a hard time growing up with only one adult to rely on, but it only made him grow closer and build a strong connection with his mom.

“He had to grow up with a single parent,” Sonseray said. “To me, some of the things he says and his actions are mature. He had to mature faster than most kids. He’s been my best friend. He’s my youngest child, so he’s been like my baby, but most of all he’s been the man of the house.”

Dakota’s dad motivated him to do things that none of his siblings have accomplished. Dakota said that, at a young age, he had to man up to support everyone in his family, which is how he has matured and grown so much in his life.

“My dad’s death was a huge shock to the family, so it showed me that when you go through hard times, it’s time for someone to step up and do good,” Dakota said. “No one in my family graduated high school and he as a person has inspired me to be different and graduate.”