A change in character 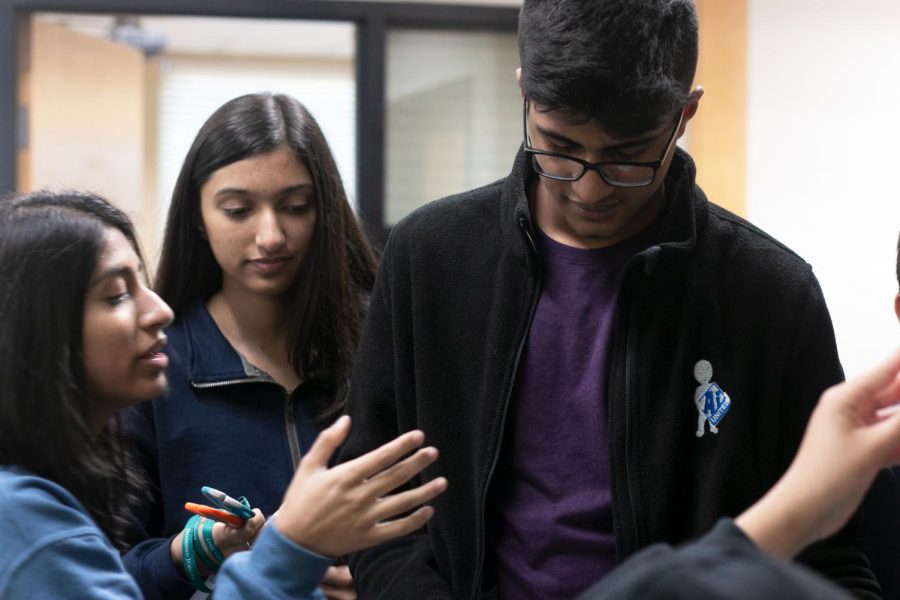 Senior Faiz Rajwani helps at the Dallas Headquarters Ismaili Center on Dec. 14. He helps out every other Saturday to support his religious community.

He walks into the small, cramped classroom, staring at the disheveled floors 135 orphaned girls sleep on every day with two thin blankets to cover them. Cooking themselves three meals a day and without a single clue about menstrual hygiene, they live in fear not knowing if they will get out. Sadness takes over as he realizes how lucky he is to have a bed and pillows waiting for him back home.

Last year, senior Faiz Rajwani was given an opportunity by the international Shia Ismaili Muslim program, Global Encounters, to travel to India to experience what everyday life is like for the citizens there. Traveling to India with a group of people from different parts of the world,  Rajwani’s experiences influenced him to start participating in community service events that he knew would make an impact on the community.

“My parents grew up in India, so I was excited to see where they grew up, but going there wasn’t what I expected it to be,” Rajwani said. “I saw that it was a life of struggle, and just seeing the quality of their lives was mind-blowing. My parents put a smile on their faces and have given me everything I want, but in reality, when they lived in India, they had nothing. They worked hard to pursue the American Dream and to be able to be in the place they are today.”

Before his trip, Rajwani hosted a drive where people helped make school bags for the students he would be visiting in India. People who participated were also able to make encouraging note cards to put in each of the bags.

After the trip, he decided to start engaging in a community service initiative called the Ismaili Community Engaged-in Responsible Volunteering (ICERV). ICERV contributes to the community by helping in elderly homes, homeless shelters, hunger busters and more. Rajwani said ever since his encounter with the reality of life in India, he has started to value the little things that he has access to.

“There are people all around the world who can’t enjoy simple luxuries like soap, pencils and water,” Rajwani said. “The reason I try to help out as much as I can is because everyone has these resources to start and make an impact, but they choose not to. Someone has to start and use what we have to create a difference in the community.”

Rajwani’s cousin, Sana Hamirani, sees the impact that the trip to India had on him. She said he has developed a more open mindset to people’s opinion which always used to bother him on a daily basis. In contrast to his behavior prior to the trip, Hamirani said he now listens and thinks about others opinion can make a difference.

“Before, he would take minor disagreements with his friends and family very seriously, and after his experience, things were put into more perspective for him,” Hamirani said. “There were certain people and circumstances which he would have some problems with, but after he came back, he became more understanding and forgiving towards these people and problems. He had experienced something that was so life-changing that it gave him a new image on how to view the problems in his life. He constantly wanted to do more.”

Hamirani is proud that her cousin was accepted into the Global Encounters program because she knew it required a lot of hard work. Along with the pressures of junior year, he had to turn in an application that was similar to applying for college. It included writing an essay and an interview.

“[Faiz] has wanted to [go] to this camp for more than several years,” Hamirani said. “There are only a few Ismaili students who can be selected from each country and since most of the applications are from the U.S. and Canada, it’s not likely [that] more than a handful of students will be selected.”

Sophomore Shamailah Poonjani has been friends with Rajwani since her freshman year. She thinks that even without the trip, Rajwani would eventually matured, but the trip definitely matured him sooner rather than later.

“It really put him on the right path, and help him realize aspects about himself that he never noticed before,” Poonjani said. “After he came back, he realized there are other people with different stories out there, and because of that, he became more open-minded and way less stubborn, especially about his own opinions.”

Rajwani’s friends and family are grateful to see that this trip has influenced him to start involving himself more in his community.

“It made me happy to see that after the trip, he started to put all his energy and time into service projects that he is passionate about,” Poonjani said. “Once he finds something that he loves, he sticks to it and makes sure the job gets done.”