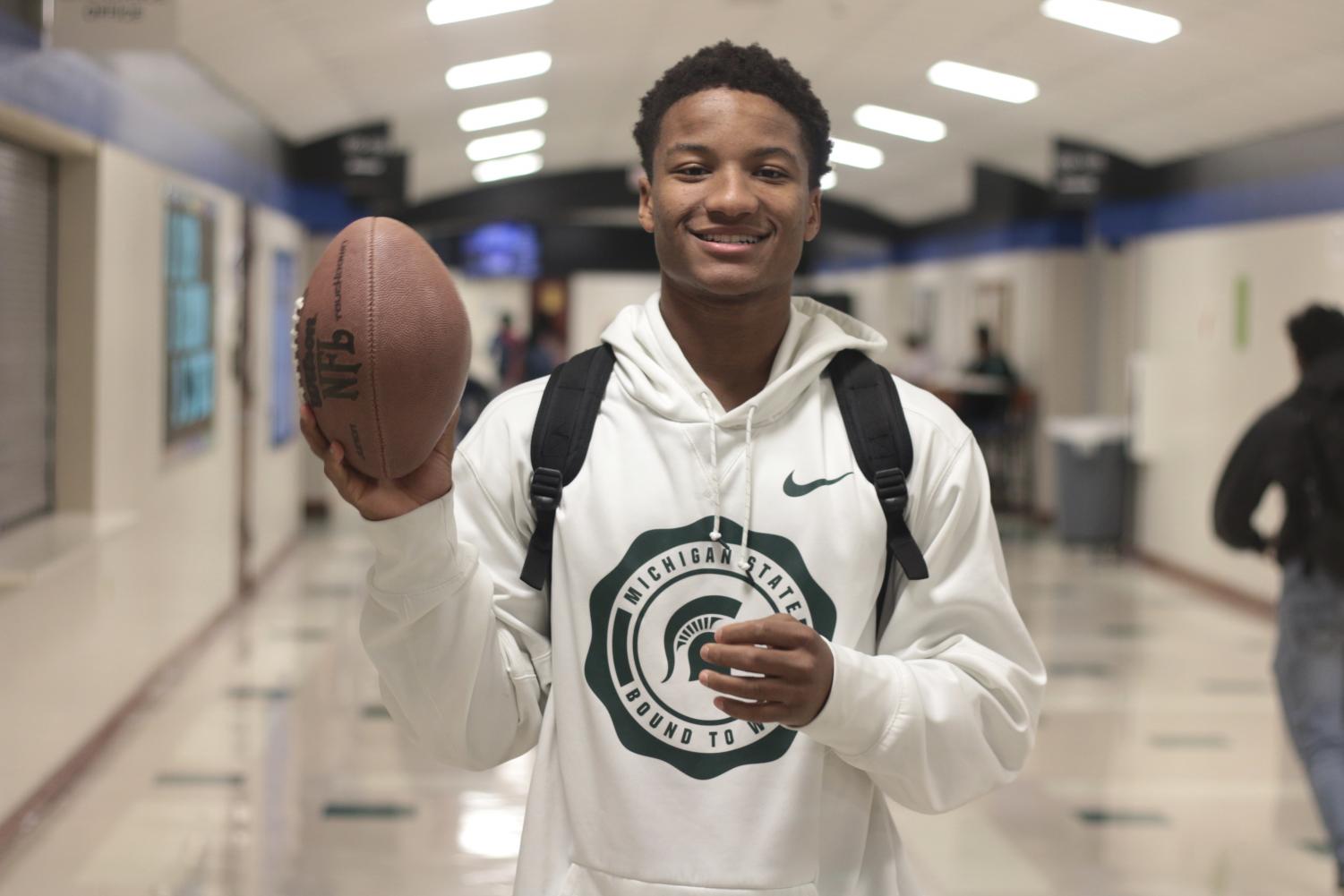 Senior Darius Snow poses with a football while wearing Michigan State merchandise. Snow will be graduating early on Jan. 2nd.

Charging into the Big Ten

It’s an ordinary day for 16-year-old Darius Snow: attending classes, chatting with friends and preparing for the game after school. That is, until head football coach Nick Saban of the University of Alabama took a trip all the way to Carrollton to pay Darius a personal visit. Saban pulled Darius from class to discuss a possible recruitment to Alabama, and that’s when Darius realized a career in college football could be on his horizon.

Now a senior, Darius has committed to Michigan State University and will be graduating early on Jan. 2 to enroll there for spring semester. After serious considerations, offers and refusals, Darius finalized his decision in April of this year.

Because Darius’ father is a coach, Darius moved schools every year until his freshman year, which affected his time to play football. Darius said he began playing basketball when he lived in Florida, but was convinced to play football again when he moved to Texas. After a five-year hiatus from football, Darius began to consider trying to play it professionally.

“When I was little, I always wanted to play football,” Darius said. “I had stopped playing from fifth grade to tenth grade, but only to play basketball. I started playing again in the spring of my ninth grade year and had a really good sophomore year, and I got my first offer from Michigan State in December of my sophomore year.”

Darius began receiving college offers in the fall of his sophomore year. Though the number of offers Darius got was overwhelming, he said he enjoyed every part of it.

“I had Michigan State, then a week later I got Georgia, a month later I got Baylor, a week later I got Texas and Arkansas in the same day,” Darius said. “It was a surreal experience. That’s why I didn’t commit very early, I was just living in the moment. When I was able to tone it down and stay humble, I got back to where I should be. I just had a lot of fun with the process.”

Darius said that if he hadn’t started narrowing down his offers down last summer, he thinks he would have received up to 40-50 offers. Coaches from different universities also began to form close relationships with Darius when they traveled to recruit him.

“Once I got Alabama, it was just every week, school after school,” Darius said. “I had coaches texting me every day. I had coaches coming to the school every other day and I had coaches calling. It wouldn’t even necessarily be about football, just about life. I had a lot of conversations with a lot of real people, even if I’m not going to their school.”

Hebron’s defensive coordinator Eric Mach said he’s seen much growth and development in Darius’ skills as a football player and as a leader.

“I’ve been fortunate to coach Darius ever since the beginning of his sophomore year,” Mach said. “He has grown mentally stronger, his leadership skills have grown tremendously, and he’s also taken better care of his body than he ever has — the results speak for themselves.”

“A lot of people would say it’s because of my family ties, but it’s not,” Darius said. “I’ve got a great opportunity to play early [at Michigan State], and it’s a family environment that I like. I’m already known there because of my family tradition, but it wasn’t really a big factor of me going there.”

Along with playing football, Darius intends to major in graphic design. After graduating from Michigan State, he plans on playing in the NFL or taking on graphic design as a career.

“I feel like I’m on a great track for [going to the NFL], especially going to Michigan State,” Darius said. “[The] NFL is just like any other job opportunity: you build your resume by playing, so the earlier I get on the field, the earlier I build my resume. I’m also pursuing a major in graphic design. I’ve become pretty good at it, and I didn’t know that you could find a career in it. I’m definitely going to look forward to doing something like that [in the future].”

“I’ve watched Darius grow into a confident and disciplined young man and player,” DeShawn said. “He always had the passion and he always was determined. Watching him overcome every obstacle and set and accomplish every goal has been a blessing.”

Darius said he will miss the relationships he has made when he graduates early. With his father’s occupation, high school was the first time he attended the same school for over a year.

“I made a lot of friends here,” Darius said. “High school was the only time where I got a steady four years in the same school, and I developed a lot of relationships that I think will stick for a long time. I’ll definitely miss those, but Michigan State is like a home away from home, so I won’t be too far away.”