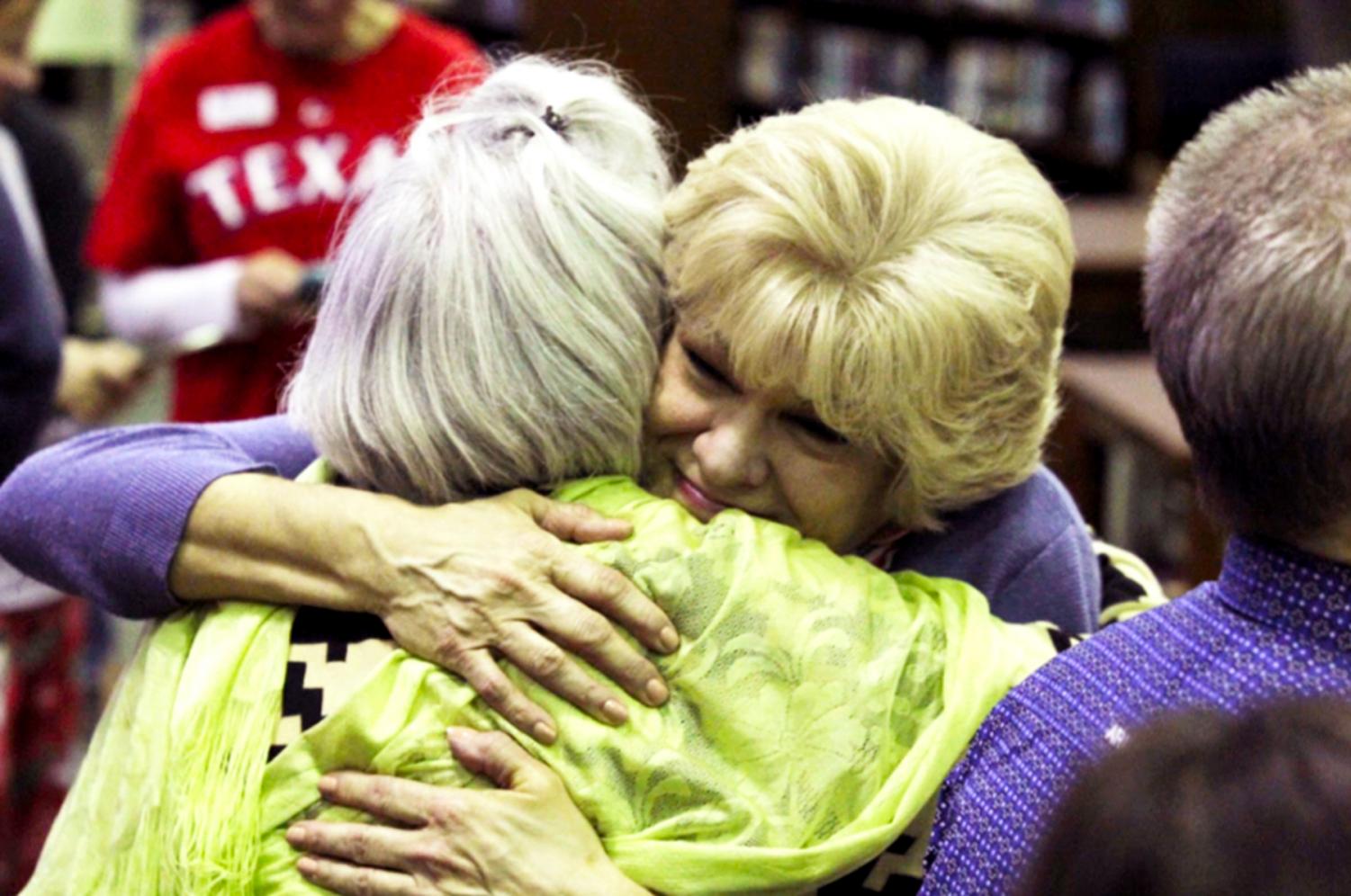 Librarian Liz Harrison hugs chemistry and physics teacher Dr. Kathleen Holly at her reception. Harrison will retire on Dec. 20 to travel with her husband. (Photo by Leila Olukoga)

Librarian Liz Harrison hugs chemistry and physics teacher Dr. Kathleen Holly at her reception. Harrison will retire on Dec. 20 to travel with her husband.

End of a chapter

Librarian is set to retire at the end of the semester

After 26 years of librarianship, 10 served at Hebron, librarian Liz Harrison has decided to retire. Harrison said she chose to retire to travel across the world with her husband.

“My husband is an executive for HPE, Hewlett Packard Enterprises, and he is the director of all the Americas,” Harrison said. “Once a year, they’ll go on these worldwide trips to have all of their leaders get together to decide what they’re going to do for the company.”

Harrison grew up in Las Vegas where her parents owned a cab company. Harrison’s siblings never went to college, and because of this, Harrison never thought of attending college until she moved to Louisiana.

“My parents owned a business, a cab company, so I always just assumed that I was going to grow up and work with them,” Harrison said. “I never had an inkling to go to college, but once I moved from Las Vegas to Louisiana, I went to college, and what a difference.”

After receiving her librarian degree, Harrison volunteered at her son’s elementary school before working at Hebron in 2009. Harrison said when she first arrived at Hebron, there were many things she had to change to better improve the library.

“When I came here, the library was very full, but filled with books that were very outdated and they had not been read very often,” Harrison said. “I had a very good book budget, and every year I would take books that were older than 10 years and promoted them in a display that would interest students. They also had five passes per lunch that a kid could come use the library. If they were at lunch and wanted to come to the library and the passes were taken, that was it. I stopped that right away, and now the library is filled at lunch.”

Since then, the library’s book circulation has been significantly higher than those of other schools, and Harrison said that it’s because of the different activities she has, too.

“Since I got here, Hebron has and still has the highest circulation of any high school in LISD,” Harrison said. “Every year we have these amazing students checking out books and I’d like to say it’s because of the welcoming environment I offer here.”

Librarian assistant Kathy Lemay has worked with Harrison for multiple years and said she has learned a lot from working with her.

“I’ve learned a lot from her,” Lemay said. “Mainly, of course, just doing things in the library. When I used to volunteer, I was just helping to shelve books and doing other little things but there’s so much more than that. She’s taught me all the behind the scenes stuff when running a library.”

Library aide Sanjana Sushil said she will miss Harrison’s compassion and the friendship she has made with her.

“I will miss her candor spirit and her connections that she builds with us,” Sushil said. “She’s not a distant teacher who just treats us like students. We’re more like her friends.”

There will be a long-term substitute filling Harrison’s place until the end of the school year. Harrison’s favorite part about being a librarian is forming memories with students that will last them a lifetime.

“I mainly wanted to be a librarian because I wanted to make memories for kids,” Harrison said. “They may forget who I am or what they read, and that is OK. As long as they grow up, and they go to a library and they got their kids with them and they go ‘hey, that is a really cool place to go. I have good memories from the library; let’s go there.’ Then they’ll be life-long readers.”