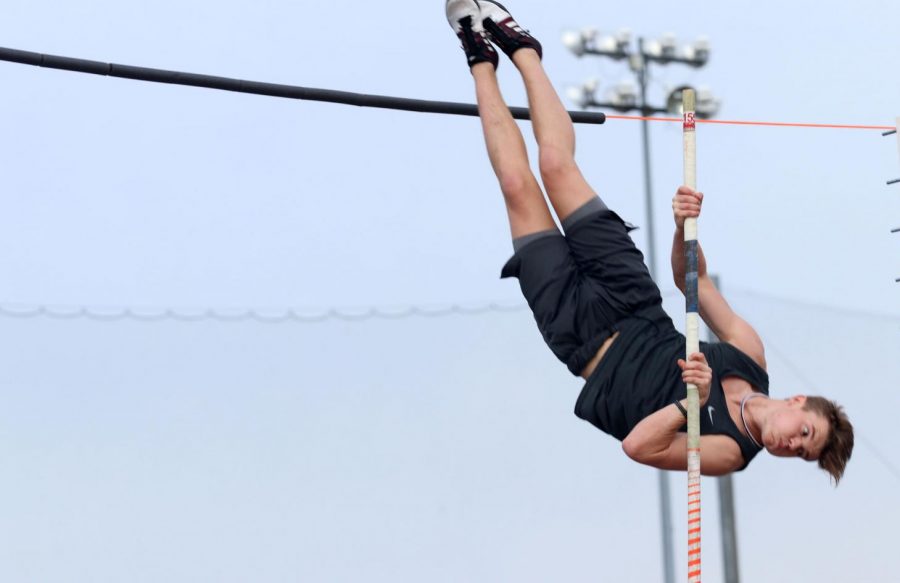 Junior Lucas Huckeba jumps 13 feet while pole vaulting. He practices almost every day during fourth period and after school. “To be a good pole vaulter, you need to be a good athlete,” pole vault coach David Brown said. “It always helps to have good speed, and the main thing is that you’re not scared of getting up on a tall stick 16 feet in the air.”

As junior Lucas Huckeba sprints down the lane as fast as his legs can take him, the world blurs around him. He focuses on his hands holding on to the pole that will, in seconds, launch him ten feet into the air. At the last second, he plants the pole into the ground and launches into the air. His stomach drops as he defies gravity. He’s flying, and he says it’s one of the best feelings in the world.

Huckeba has a passion for pole vaulting. He joined the team in seventh grade after watching someone vault. After years of work, he has finally reached the top, advancing to district in early April.

“I did it because it looked fun,” Huckeba said. “I liked the thought of flying.”

Huckeba wants to beat his record of 14 feet and try to jump 15.6 feet. He says he looks up to Armand “Mondo” Duplantis, who is the youngest person to jump 19 feet 10 inches on pole vault.

“My favorite part about pole vaulting is when you’re in the air,” Huckeba said. “There’s nothing that really matters. You just get to float there for a second.”

Along with practicing during fourth period, Huckeba meets with a private coach at Lovejoy High School. He also practices whenever he has free time and over the summer.

“It wasn’t until this summer that Lucas really got any better,” senior pole vaulter Jason Le said. ”Before that he was on track with me and over the summer he started working more and he was able to get better.”

Though he faces competition from Coppell, Flower Mound and Southlake, Brown hopes Lucas will advance to area, regionals and state. Brown first saw Lucas pole vault when he was in middle school and said he saw potential in him even then.

Even while Lucas was in middle school, he was beating records. In eighth grade at Kilian, he beat the school record of 10 feet by three inches.

Lucas hopes to continue to improve in pole vaulting. He hopes to attend LSU, where Duplantis attended, or Texas Tech, where Drew McMicheal broke many records last year.

“Lucas is dedicated,” pole vault coach David Brown said. “He would be out there every day practicing if I would let him. In the rain or the snow or the thunder and lightning.”