Junior commits to Howard University to play Division I golf 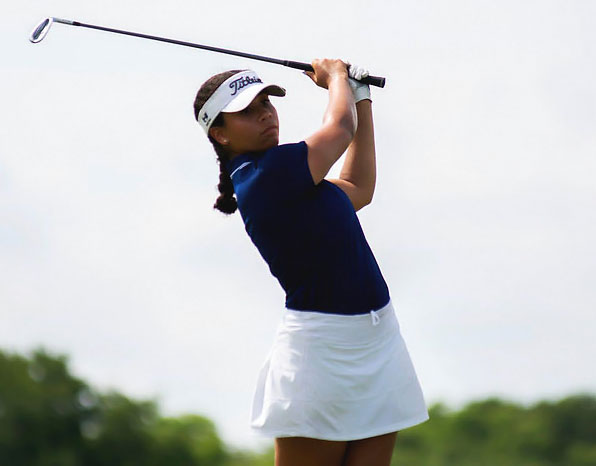 Junior Morgan Horrell swings her club and scans the course to see where her ball lands. In December of 2019, Horrell was frustrated with the game because her goals seemed out of reach; she even considered not playing college golf. “Once the summer came around, I was finally starting to hit those lower numbers I had been shooting for,” Horrell said. “That was when I realized that I love this game and once I knew I could [reach my goals], that was a total game-changer because I worked so hard to be able to do that.”

Junior Morgan Horrell has been surrounded by golf her whole life. The challenge of correcting failures and improving her mentality was addictive; she considers hitting even par as one of her greatest joys. Now, all of her hard work has paid off.

Horrell has been on varsity golf since freshman year and is now a team captain. She is committed to playing Division I golf at Howard University and plans to major in business/marketing and minor in TV/film broadcasting.

Horrell began competitive golf in eighth grade, after completing basketball and volleyball season at the middle school she attended. She played varsity golf for Newman Smith High School for one year before moving to Hebron after her freshman year.

“I eventually got tired of team sports,” Horrell said. “So I [thought] golf might be the answer. I already had a country club membership, I had the facilities, I already knew how to play. I was like, ‘let’s do it.’”

Horrell said golf is challenging because it takes hard work and a long time to reach certain goals, but that challenge is exactly what makes her love it. She believes the mental aspect is equally important as the physical aspect to be successful in the sport.

“The sport is definitely one of the hardest things I’ve ever done,” Horrell said. “You have to come to peace with failure and the mental challenge of it all. You have to fully believe that every shot will be great because you could have a great swing and great foundation, but if your mind is not in the right place at the right time, you’re never going to do well or meet your goals.”

The scouting process for golf is different from other sports because the students have to reach out to the college coaches, rather than the opposite. The process takes place in multiple stages: First, the golfer creates a resume including their golf scores and sends them to head golf coaches, then in the summer before junior year, coaches are allowed to reach out to golfers to plan to watch the golfer play, campus visits and meetings.

“I did talk to [The University of] Missouri, Mizzou, for a while,” Horrell said. “[I also talked to] Lin University in Bokaford and [University of] Houston, but after Howard University came in I just stopped emailing [coaches] because I knew in the back of my mind that nothing was going to beat it.”

Many of the juniors who committed to playing collegiate golf in the past year committed blindly because of COVID-19-related restrictions. Many of them have never seen the campus, never met the team and never met the coaches.

“It can be a very overwhelming process picking the school you are going to spend the next four years at and the team you will be spending so much time with,” head golf coach Mercedes Trent said. “I think Morgan made a great decision to go to Howard. It gives her a golf program on the rise that she can be a part of a wonderful historic school where she will get a great education and make lifelong relationships.”

According to Trent, Horrell’s positivity, work ethic and character are why she chose her to represent the golf team this year.

“I know that Morgan has worked continuously on her game to achieve her goals,” Trent said. “[Since] June, she has made huge strides in her game. I know that with her work ethic, the best is yet to come.”