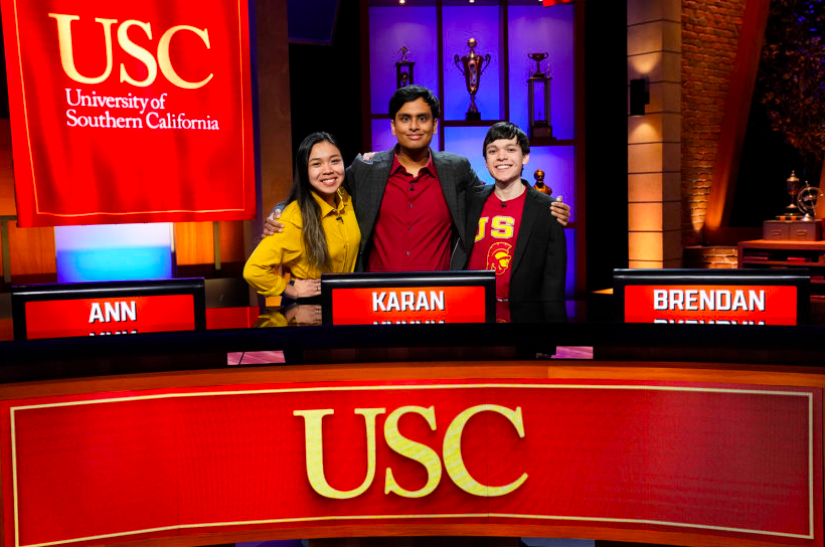 2019 alumnus Brendan Glascock (right) poses with Karan Menon and Ann Nguyen on the set of Capital One’s “College Bowl.” Glascock attends the University of Southern California and is a computer science major. “College Bowl” is currently streaming on Hulu. (Photo via NBC)

2019 alumnus Brendan Glascock (right) poses with Karan Menon and Ann Nguyen on the set of Capital One’s “College Bowl.” Glascock attends the University of Southern California and is a computer science major. “College Bowl” is currently streaming on Hulu.

2019 Hebron graduate Brendan Glascock grew up watching classic trivia game shows, and, in 2021, he found himself on one, fulfilling a lifelong dream.

“[Being on the show] was especially special to me because I’ve been watching game shows since I was a little kid,” Glascock said. “During [COVID-19], I discovered Buzzr, a streaming channel where they show classic game shows from the 70s and 80s. My dad and I watched that show probably eight hours a day.”

Hosted by NFL hall of famer Peyton Manning and his older brother Cooper, “College Bowl” featured 12 national universities in a tournament-style competition. Glascock discovered “College Bowl” when the show reached out to the USC quiz bowl team for casting. He, along with two other USC students appeared in four episodes of the 10-episode series.

“The first episode didn’t really feel like it was a TV show,” Glascock said. ”It just felt like we were alone in a room with Peyton Manning. The cameras were all hidden and all the production people cleared the area when the taping was going on.”

“College Bowl’s” first episode aired on NBC in June, and the series concluded with its championship episode on Sept. 7. Glascock didn’t initially process that millions of people would likely see his face on TV, but he gained recognition around campus, especially after the computer science department tweeted about the show and various USC publications wrote stories about their team.

“Sometimes I’ll just be walking down the sidewalk on campus and someone will say ‘hey, you were on TV,’” Glascock said. “The weirdest [thing] was when I was at the grocery store, not even on campus, and an adult also recognized me. That’s when I realized just how many people were watching this. It wasn’t just [a show] for game show nerds like me: the whole USC community was into it. It’s really great to know [that] I represented USC, and the school had my back.”

Glascock said he was happy to have represented Hebron as well since it’s not every day a Hebron alumnus is on national TV. Glascock spent his four years at Hebron as part of Academic Decathlon, a competitive testing team, and served as a captain in his junior and senior years. Academic Decathlon coach Donna Friend submitted a recommendation for Glascock to be on the show, and she watched the show as it aired, yelling at the screen and messaging Glascock.

“There were so many times, specifically with Brendan, where he buzzed in faster than other kids,” Friend said. “And they were things we had studied in his four years here. He answered something about the solar system, and one year that was our science and I knew he knew it. I’m really proud of him. The work he did [at Hebron] paid off.”

Having placed second, Glascock received a $25,000 scholarship with which he hopes to spend another year at college pursuing his teaching credential. Glascock was always interested in teaching AP calculus and attributes much of his interest in teaching to Friend, AP English teacher Jeannette Rooks and AP calculus teacher Ryan Woodward.

“I had a lot of great teachers in high school who made me feel like I could do anything,” Glascock said. “Yet [I decided], I want to be like them.”

“I might have to wait, but I’m definitely interested in another game show,” Glascock said. “[Being on a gameshow] was a great experience. I’d love to do it again.”