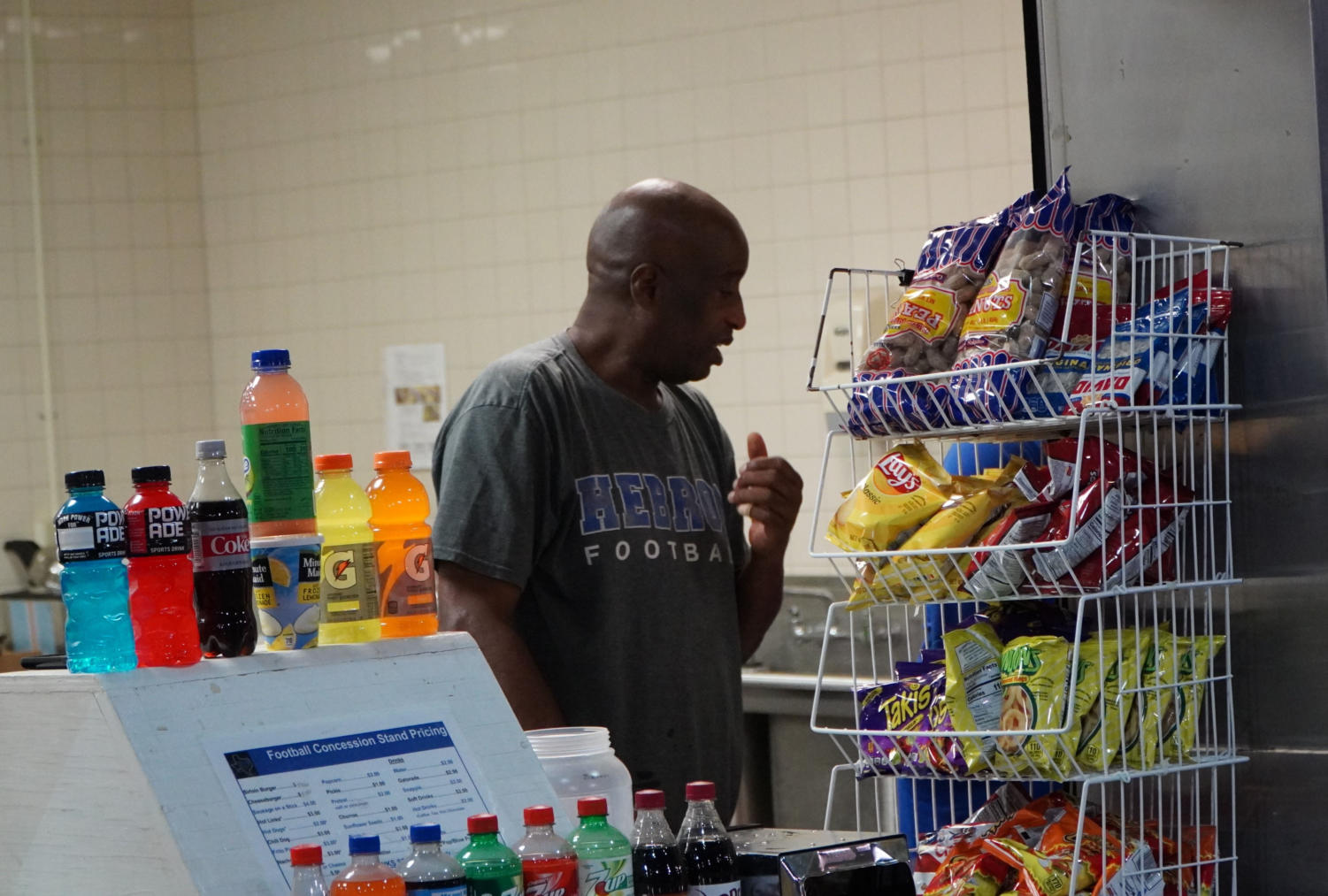 Ulysses Wright, the head of the Hebron football concessions, provides snacks and drinks to customers at the Hawk Stadium on Oct. 7. (Photo by Hyunsol Lim)

Ulysses Wright, the head of the Hebron football concessions, provides snacks and drinks to customers at the Hawk Stadium on Oct. 7.

Helping the community one step at a time

Starting Aug. 26, Dave Campbell’s Texas Football Magazine and the North Texas Honda Dealers teamed up to honor those who have made a positive impact in their communities. On Sept. 10, one of the people honored was head of Hebron football concessions, Ulysses Wright, who felt like his hard work had been recognized when he received the Community Helper Appreciation Award in the third week of the Helpful Honda Road Tour.

Ulysses began volunteering for the football concession stand in 2011 as a result of his son, Devin Wright, being a part of the varsity football team. After two years, Wright rose to become head of football concessions, later continuing to volunteer even after his son graduated because he enjoyed making people happy with his service.

“It feels good to be loved and appreciated by others [through the award], especially because they recognized that I’m doing a good job [at the football concession stand],” Ulysses said. “It made me feel as if someone was actually paying attention to my hard work, and I was happy to get the award.”

Ulysses’ son, Devin, said he was ecstatic to see his father receive the award since he knows how much he is committed to making sure the concession stand is successful. Devin loved his father’s involvement in the football program, especially when Devin was in high school.

“My dad definitely deserves the award because he takes a lot of responsibility and ownership in making sure that the concession does great and that it represents [the] football [program] well,” Devin said. “I’m extremely proud, and I know he’s been working really hard, so I’m glad that his hard work is getting recognized.”

Behind the scenes, working the concession stand is busy and time-consuming according to Ulysses, as he routinely visits Costco, Sam’s Club and other food suppliers to ensure the food is made just right. Ulysses admits maintaining the football concession stand takes a lot of effort, but he believes it is beneficial as the money from the stand goes to the football booster club, which helps the football program’s necessities.

“My most memorable experience is seeing people enjoy our food, especially when people from different schools come to our school and say, ‘Wow, you guys have so much more [food] than our school,’” Ulysses said. “I put my whole heart into preparing the food, and I don’t serve anything that I wouldn’t eat myself.”

It’s not just seeing people’s happy faces when they bite into his food that makes Ulysses happy — it’s also the relationships he’s formed while volunteering. The friendships Ulysses established as the head of football concessions have been long-lasting, memorable parts of his experience.

“I talk to a lot of different teachers, parents [and] principals, and [the concession stand] is a good place to start conversations,” Ulysses said. “I’m also a people-person, so this type of stuff is right up my alley. The best part is just talking to the friends I made [at the concession stand], because we’re all Hawks.”

Ulysses met volunteer Steve Tennenbaum while working  at the football concession stand, and the two had been friends for over five years. Tennenbaum said Wright deserved the award for a long time because of his dedication and his outgoing personality when interacting with the parents that volunteer at the concession stand.

“[Ulysses] is a good friend and we have a great work relationship,” Tennenbaum said. “[Ulysses] is always trying to come up with new ideas to make the football booster program better and spends a lot of time at the concession stand. He always tries to support the parents that [volunteer at the concession stand] and is really helpful in helping them.”

Despite the fact that Ulysses could stop volunteering at any time, his willingness to help others motivates him to keep on going.

“I really enjoy helping people and serving [them],” Ulysses said. “Every year, I like helping the football team and sometimes it can be a lot of work, but it’s all worth it in the end.”