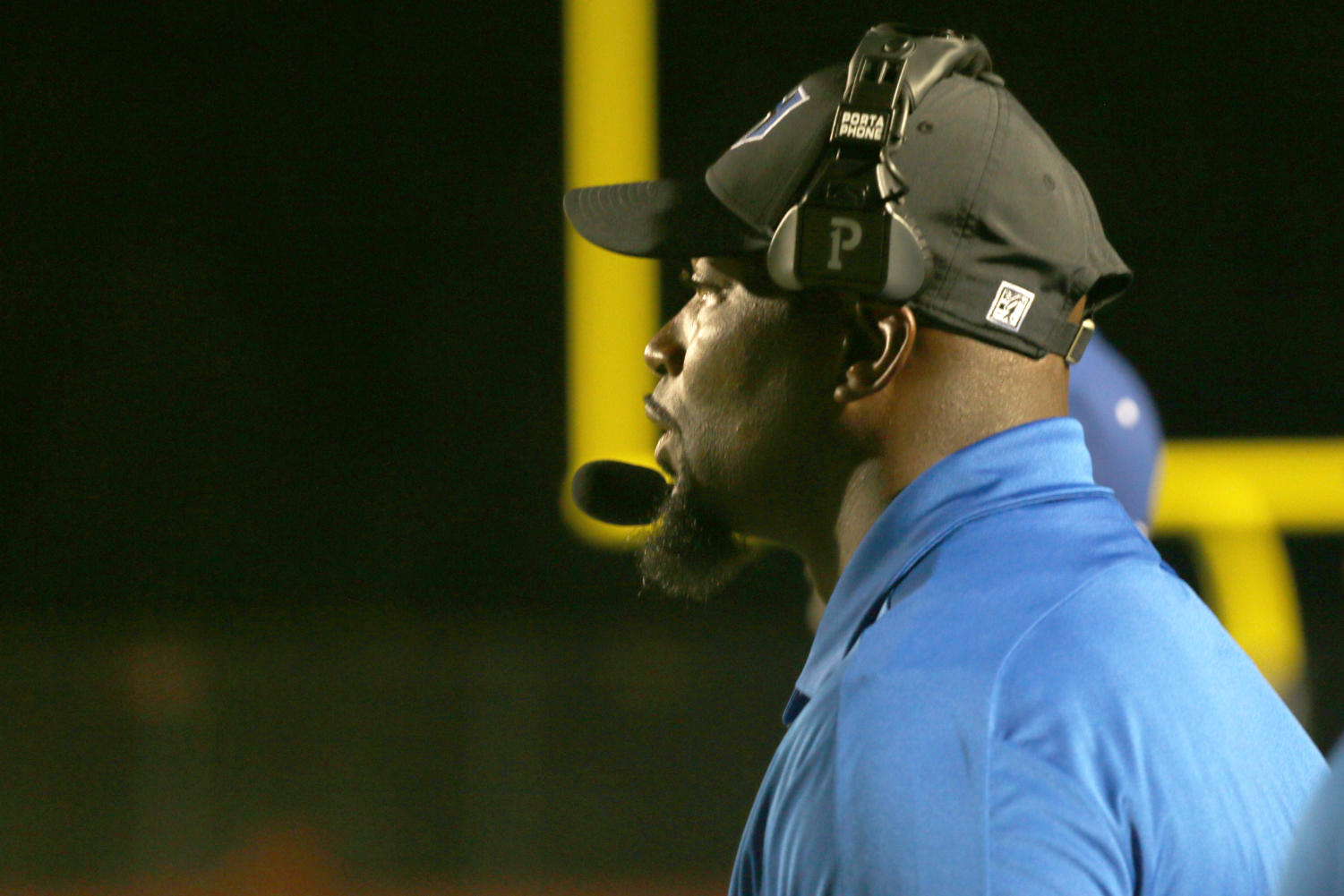 Defensive coordinator Quincy Stewart watches a play at the first home game of the season Sept. 2. This is his first year at Hebron. (Peyton Kuschmeider)

Defensive coordinator Quincy Stewart watches a play at the first home game of the season Sept. 2. This is his first year at Hebron.

A young boy throws himself around, tossing a football in the air and tackling himself. His father watches as the boy chases the ball: his determination and passion written all over his face. This year, the once-young boy, now with experience in the NFL, joined the Hebron coaching staff as a defensive coordinator.

First-year defensive coordinator Quincy Stewart grew up in a family involved in sports. In fifth grade, his father allowed him to play football, and he gained a passion for it, which led to him playing throughout his school life. At the start of his time at John Tyler High School, he won the state championship against Austin Westlake, which kick-started his career. From there, he went to college at Louisiana Tech and even played for the San Francisco 49ers as a linebacker.

“[My high school team and I] played a lot of bigger schools like Alabama and Texas A&M,” Stewart said. “We ended up shocking Alabama [after winning]. When I was there [my] junior year, they were No. 8 in the country and we ended up shocking them, which kind of propelled me to get an opportunity to play [in] the NFL.”

In one game, while playing for the Giants, his team was 22 points down, but eventually came back – it’s described as one of the biggest comebacks in NFL history.

“I’ve had so many high points, but if I had to narrow it down to one single thing, it’d probably be my opportunity to play in the NFL,” Stewart said. “It was a dream come true.”

After three seasons in the NFL, Stewart joined the CFL and then retired from football in 2007. He started volunteering as a coach, and after being fully certified for it, coaching athletes became something he enjoyed. Stewart moved from schools like McCallum and Duncanville, where he first met and became colleagues with head coach John Towels.

“[Stewart] becomes a person you can go to when you have professional needs,” Towels said. “We’ve worked together for so long and spent so much time together during the day, you know, you become friends.”

For Stewart, building relationships with his athletes has been a priority; he said he tries to have as much fun with them as possible.

“Learning the names of the athletes that I coach has been the biggest adjustment for me because I like to be personal,” Stewart said. “They know me and I want to feel like I know them, not just by face, but by name. Building that relationship with my athletes is key for me.”

Football captain and senior Aidan Viels said Stewart’s willingness to help students allows them to be better assets to the team and as individuals.

Stewart said he has lots of goals to ensure the team keeps winning and help the players improve as individuals.