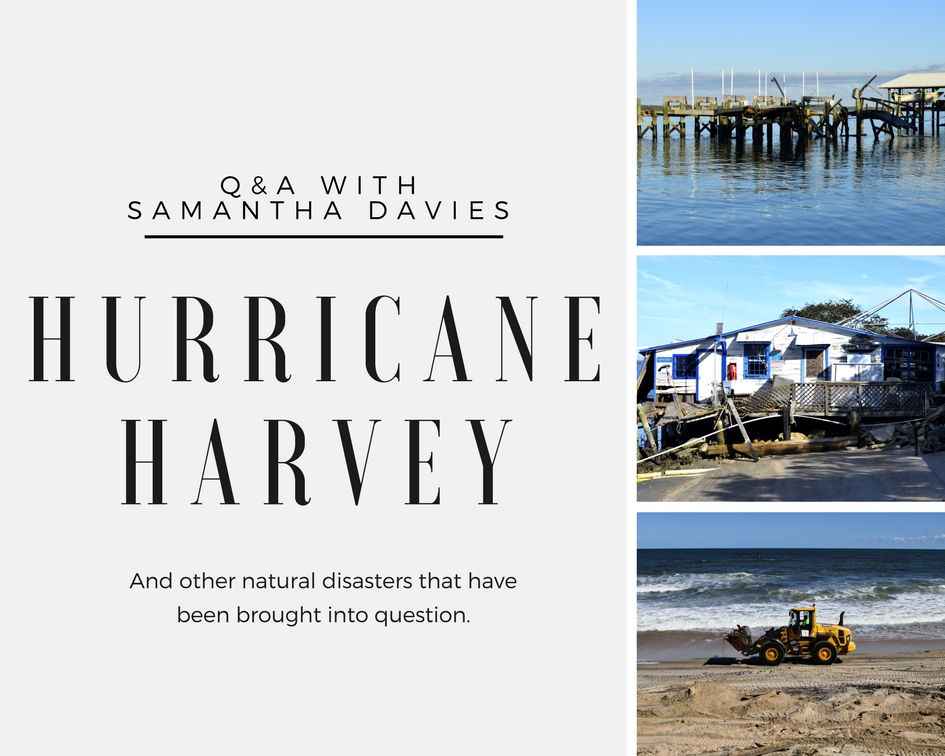 With the recent onslaught of bad weather from hurricanes to earthquakes, The Hawk Eye takes a closer look with the help of NBC 5 Today meteorologist Samantha Davies to understand the reasons behind these occurrences.

Q: What do you think is causing this influx of hurricanes?

A: We are in the middle of a very active hurricane season. This year, all the ingredients are in place that help hurricanes grow and strengthen. Ocean temperatures are very warm and upper level winds are light. At the beginning of the season, El Nino was strong so we thought it would be a below normal hurricane season, but El Nino weakened and that has also led to the increased activity.

Q:What actions are being taken to prepare for hurricanes?

A:To prepare for hurricanes, emergency officials and the National Hurricane Center are putting out warnings and urging people to evacuate. In Miami, after Hurricane Andrew hit in 1992, the buildings that were rebuilt were built to withstand a category three storm.

Q: Could climate change have a hand in the sudden increase in storms?

A: Hurricane Harvey broke a record for the most rainfall caused in the U.S. from a tropical system. The Cedar Bayou received 51.88 inches of rain from Harvey. Hurricane Irma set records for wind. Winds were 185 mph max for 37 hours straight.

Q: What is the current situation in the Houston area? How long will it take to recover from Harvey?

A: Harvey caused damage Houston has never seen before. It will take a long time to complete the cleanup and rebuilding process, there isn’t an exact end date. It could be months or years.

Q: How did Hurricane Harvey form?

A: Harvey formed in the Gulf of Mexico as a category four hurricane with winds of 130 mph. There were no strong steering winds in the upper levels of the atmosphere to push Harvey out of the Gulf so the storm sat for days over warm waters and strengthened. The lack of upper level winds is also why Harvey stayed over southeast Texas so long and caused devastating flooding.

Q: How has it been possible to have three nearly consecutive hurricanes in the same general area?

A: Hurricanes form over open waters from an area of thunderstorms called tropical waves. Since they all form the same way, it is common to have a few in the Atlantic Ocean all at once.

Q: What effect does climate change have globally? Have there been any other hurricanes/large storms happening around the world simultaneously with Harvey/Irma? Should we brace for an increase in natural disasters because of it?

A: Roughly, during the same time of Hurricane Harvey and Irma, a deadly earthquake struck Mexico. Sept. 7, a magnitude 8.2 earthquake occurred off the coast of Chiapas, Mexico. In order to say for sure if this is global warming, the data will be saved and compared to other natural disasters studied over hundreds of years.