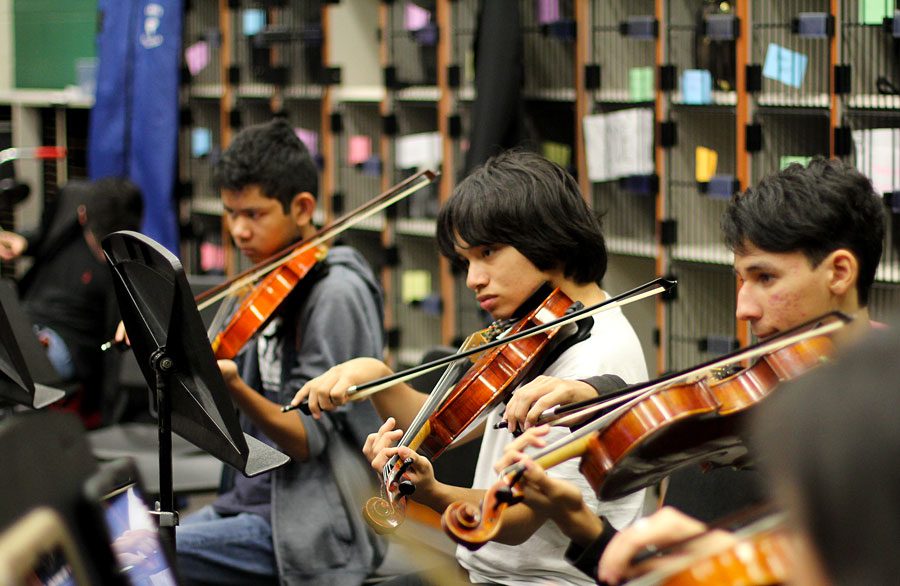 Sophomores Drake De Leon and Edmer Banegas play the viola. They are both in symphonic orchestra.

Orchestra will hold its annual cluster concert in the gym on Nov. 9 at 7 p.m.

The cluster concert combines the high school orchestra with the orchestras from middle schools in the feeder pattern.

“This year, [director Matthew Cautivar] is going to have us combine with beginner’s [orchestra], so our stand partner is going to be a [6th grader],” violinist sophomore Mirabella Herrera said. “They get to meet high schoolers that they can look up to, so it’s really cool that they get to do that.”

Orchestra will be playing songs such as “We Will Rock You” and “We Are The Champions” by Queen.

“I’m pretty excited because it was really fun last year,” Herrera said. “We play pretty difficult music, and this is music that we can have fun with. It’s a lot easier compared to what we normally play.”

Herrera said the concert is supposed to be like a pep rally for orchestra.

“We’ve basically learned all of [the music],” Herrera said. “We’re just practicing. We’re going to use electric instruments, and have extra stuff to make it more like a pep rally.”