“Funny Side Up” to perform improv show tonight 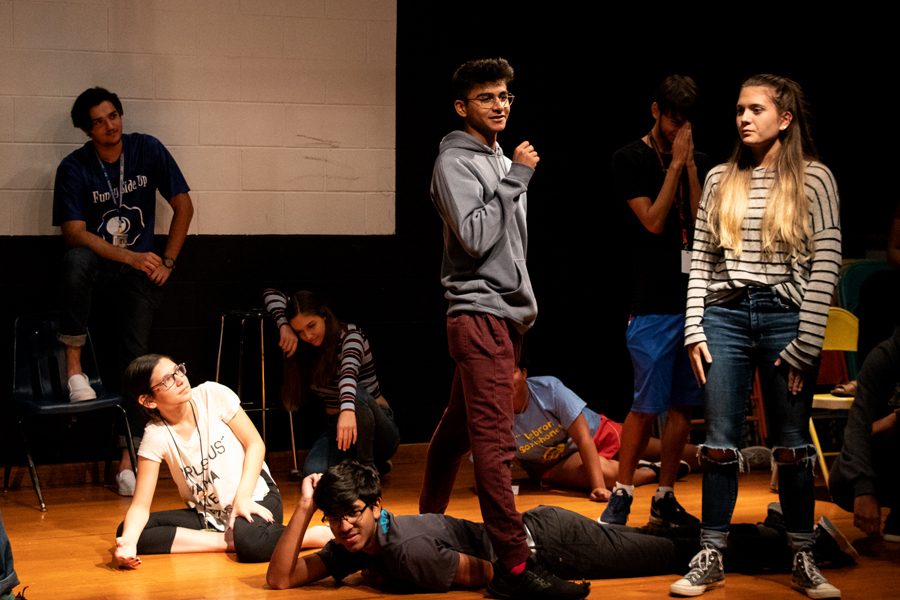 “Funny Side Up” members Asad Bhimani, Kaamil Thobani, Krishna Nair and Meredith Hendrix rehearse during block lunch on Sept. 19 for their first improv show of the year on Sept. 20 at 7 p.m. in the auditorium. The group practiced acts for their show by playing creative games which included reciting random poems on the spot.

The Hawk Theatre Company’s improv troupe, Funny Side Up, will perform its fall improv show on Friday at 7 p.m. in the auditorium.

“Expect the unexpected,” junior Meredith Hendrix said. “Anything happens at these shows, and it gets kind of crazy. Every show is different; nothing is ever the same.”

Seating is first come first serve, and tickets can be purchased at the door for $5.

“It’s a great way for people to come and have a great laugh,” theater president Krishna Nair said. “It’s going to be funny. There’s a lot of humor.”

“We kind of just go with the flow and see what happens,”  junior Ali Niaz said. “The No. 1 rule in improv is to never say no.”

The improv troupe has been practicing for the show during block lunch and before school since the beginning of the year.

“I want to step out of my comfort zone and do more weird things to make the audience laugh,” Niaz said. “I feel like I play the same characters, and I want to get out of that.”

While theater director Ryan Heitzman has been teaching, directing, and giving notes to the actors, the show is put on and made up fully by the actors while they are on stage.

“My favorite part about improv is just letting myself go,” Hendrix said. “Being on stage helps me have my personality out there and show my true self instead of having to play a character.”