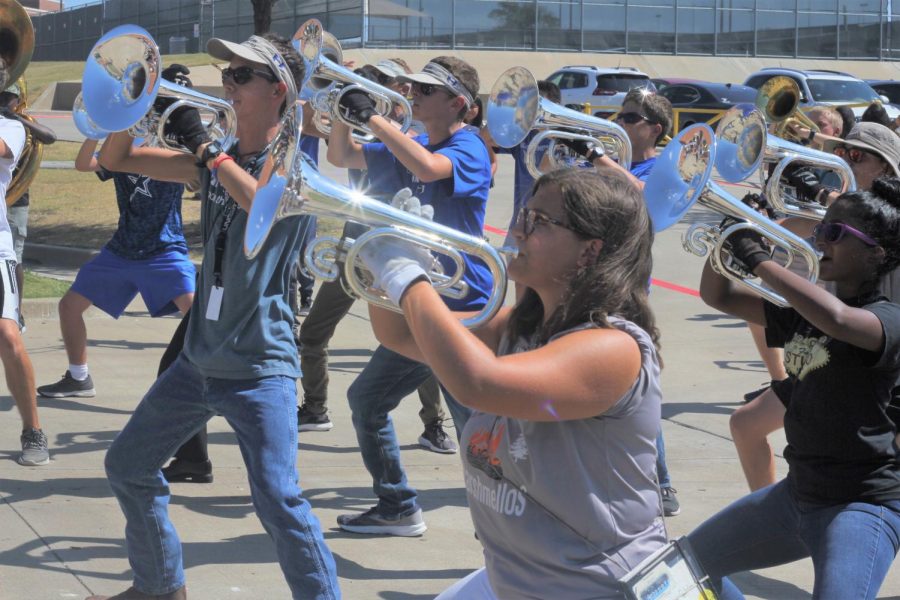 Sophomore mellophone player Susanna Egelston rehearses choreography with the rest of the brass sections during 3rd period the Wednesday before BOA Dallas. Band utilizes time during their separate class periods to supplement material learned altogether during after school rehearsals.

Band placed second with a score of 84.45 behind Flower Mound High School at the Bands of America (BOA) Dallas/Ft. Worth Regional Championship on Saturday.

It was band’s first contest of the season, which ends in mid-November at the BOA Grand Nationals Championships compared to most Texas bands which finish their season at the Super Regional in San Antonio Nov. 1-2.

After getting back to the band hall around midnight from the Friday night away game at Coppell High School, band’s call time for rehearsal in the morning was 5:15 a.m. because of their early prelims performance time slot at 10:15 a.m.

“I ate breakfast at three in the morning,” head drum major Abby Rieger said. “Lots of caffeine was consumed that day. It was definitely something that we haven’t done in four years as a band program, but it’s just a part of our job – we have to buckle down and do it.”

After getting a couple hours to nap and eat back at school, band performed their finals run at 9:45 p.m. While most of the competing bands had their shows finished, Hebron only had two of the three parts of their show complete for the contest. This is part of why Rieger said she is OK with placing second.

“There’s still a lot we have to add, and I think as a program, we always need a little bit of motivation to become the top dog,” Rieger said. “I think that’s something we can pull off; we have two more weeks in our season than the average competitor, so our growth has to occur over a longer time so we don’t max out on our performance too early.”

Rieger thought their first contest went fairly well, and she is excited to keep working hard and show the band world what they are all about.

“After watching the recap videos, I definitely say prelims was pretty solid and both of our performances were full of a lot of energy,” Rieger said. “We had some mistakes and road bumps to get over, but we held it together very well for our first contest.”