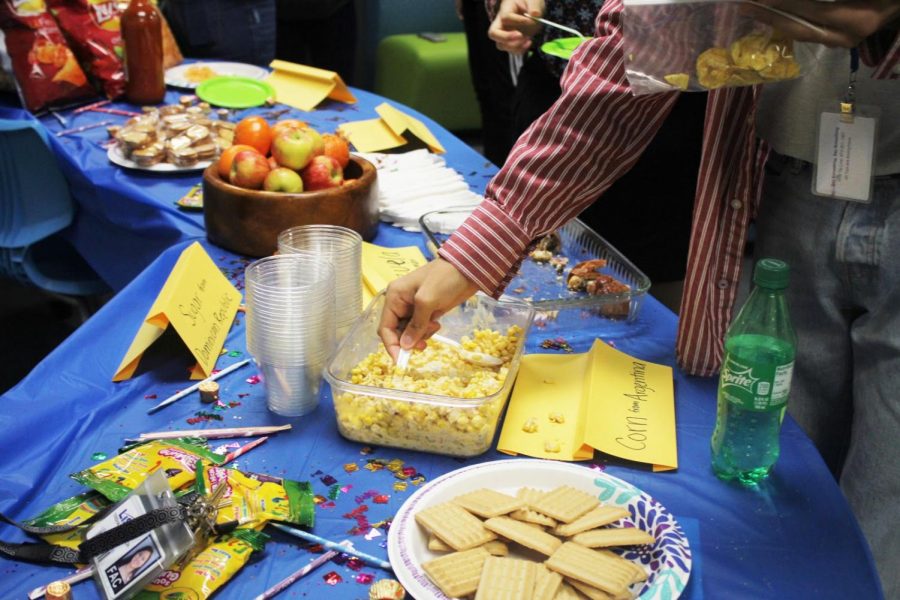 Students serve different kinds of cultural foods that some of them made themselves in the Hawk’s Nest on October 9 while listening to Hispanic music and dancing. At the event, judges determined the winner of the salsa contest.

The school has celebrated its fourth annual Hispanic Heritage Month from Sept. 16 – Oct. 10 with block lunch events. The activities to celebrate started off with a Twitter activity in which advisory classes took a group picture with their class posting it on Twitter with a caption answering the question for this year’s theme “Quienes Somos?” meaning  “Who Are We?”

Last week, students went down to the super H to take polaroids and were asked to write their connection to the Hispanic culture on those polaroids. On Oct. 9, they held a Hispanic Heritage showcase, a salsa eating contest and a food fest in the Hawks Nest.

“I think this month has done a great job bringing all kinds of students from different cultures together,” said Economics teacher Caroline Parrish, who is head of the Hispanic Heritage Month committee. “For example, when we did photo connections, I noticed students who were not Hispanic also joining and just realizing we are all part of a greater community called the world. This year’s theme “Quienes Somos” is about expressing who we are, not only as individuals, but who we are as a community at Hebron.”

The committee has also received help from six student volunteers: seniors Jenna Fitzgerald, Gillian Witten, and Leah Mendoza and juniors Ayra Jamal, Michelle Gonzalez, and Rafael Chachutt. Algebra II teacher Michael Flores has been working with the student volunteers by taking charge of all the media including the videos shown in advisory classes.

“It is important for us [to celebrate this month] because I think every student at Hebron should be valued and that’s what’s so great about America, is that we have different cultures and we should be able to celebrate them and value those contributions,” Flores said. “Students of Hispanic origin should feel celebrated and should give them a reason to be proud of who they are and how their culture contributes to the American culture in general.”

Parrish, Flores, and ESL liaison Trisha Kauzlarich were in charge of all activities and celebrations hosted this month. The committee encourages students of all cultures to participate in the celebrations this month.

The committee has been advertising on all social media platforms hoping to get the word out. They have received support from a new student organization called the Latino Student Union and Spanish National Honors Society.

“No matter who you are, everyone has their own story,” Jamal said. “That story represents who we really are as people.”