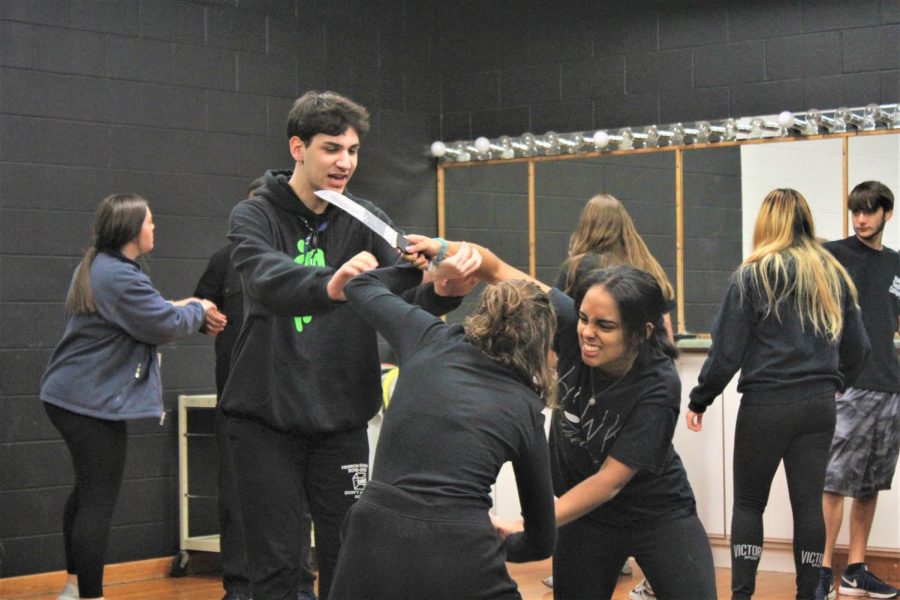 Sophomore Melat Woldu practices scene 1 of "Romeo and Juliet" in Drama A after school on Oct. 17. Woldu plays Tybalt, a supporting character who is a Capulat and the cousin of Juliet.

“It’s going really well so far,” director RaMina Mirmortazavi said. “This is the first Shakespeare [play] for all of our students who are in it, but they’re really focused, they’re running their lines and they’re handling the language well, so I think it’s going to be a really great show.”

Although the original lines are being kept for the play, the setting is being modified. Instead of the elaborate costumes and old fashioned look from the Elizabethan era, the show is being interpreted in a black, white and red theme.

“We’re setting it in the ‘90s and also our costumes are going to be simple and elegant in black and white,” sophomore Ishrita Pol said. “In the first half of the show, we actually wear all white, plus the set has many different parts and is really abstract.”

Since “Romeo and Juliet” is a classic Shakespearean play, the dialogue is different from modern English, making it a challenge for the actors to memorize.

“The only challenge is learning the lines because Shakespeare is really difficult,” junior Abby Vitt said. “Plus, Juliet has around eight monologues throughout the show, so it’s a lot to learn, but other than that, it’s been really good.”

The company has been working on this production for two months and are confident in the reactions they will receive on show night.