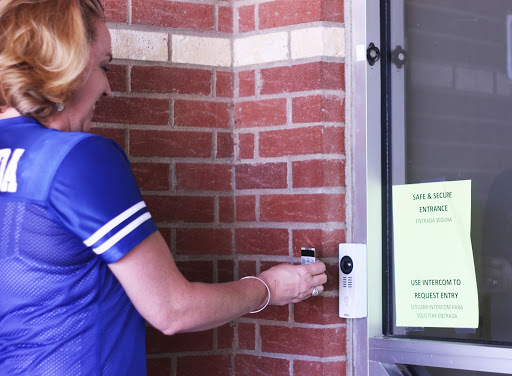 Parent Kimberly Estrada shows her ID to the video doorbell so that she can enter the school for the pep rally. Estrada has two kids that go to Hebron, and even though the whole process of getting into the school is tedious, she feels assured that they are safe inside the building. “It makes me feel safe as a parent to know that my kids are in a place where security is held in high regard,” said Estrada.

New security measures were implemented around campus by the district at the start of the school year in an attempt to make a safer environment for students.

“The last thing that I or any other adult here wants to happen is something like we’ve read or seen where people are getting seriously hurt,” assistant principal Glen Croll said. “I don’t want kids walking around scared being here at Hebron, but I want them to be aware of what to do when something happens. I just want to have a plan.”

It’s Croll’s first year at Hebron and he is in charge of managing security. New cameras and video doorbells, funded by the 2017 bond, have been placed around the school, mainly at the entrances. Anyone coming in the building has to show a form of ID and state a reason for wanting to enter.

“This year, having everybody sign in and show their ID [to see] who’s coming through the front has been good,” associate principal Jacob Garlinger said. “It’s new, so we are just going to see how it’s going to play out.”

Although the security increases have been implemented to make the school safer, students and teachers on campus are still getting accustomed to changes like wearing IDs and checking to make sure that everyone has theirs. Parents are also affected by rules such as only dropping off lunch for their own child. Even then, they have to go through the whole doorbell and ID process to even get inside.

“I think we are learning now, but once everybody gets used to [wearing IDs], it’ll become kind of a non-thing and it’ll be just business as usual,” English teacher Jeanatte Rooks said. “But it may take a while for the kids to accept that.”

The people who are in the safety and security department for LISD have been taking input from everyone affected by the changes to decide what the best option is regarding safety. They are open to feedback from not only the school but also the community.

“The district obviously feels compelled with the current state of things to make people feel that they’re sending their kids somewhere safe,” Rooks said. “As a parent of students here, I value that.”

Along with the new technology, there have been other additions such as the “See Something, Say Something” campaign to raise awareness among students. The goal is to get students to feel comfortable and safe enough to make a report, text the tip-line, or speak to an adult when they think something is wrong.

“I would say that I would like to see, not necessarily changes, but that students are taking advantage of these resources,” Croll said. “I’d rather be safe than sorry, so it’s OK to report something and have it turn out to be nothing, rather than not saying anything at all.”

As the year goes on, Croll said the hope is that students and teachers can come to school without the fear of being victims of a school shooting or any other tragic event.

“I think we stay on top of things, and we are alerted a lot of times to what’s going on and that’s a compliment to the students that go here because they want to have a safe school,” Croll said. “Hopefully, they feel safer and more at ease. I think working together with our administrative team and always thinking about how things can change and how they can be improved is helping to create a safer atmosphere.”